Sitting at my dentist chair for 40 minutes and suffering through the shrill sound of the ultrasonic cleaner, I suddenly started to feel contractions from my chest. Oh, no. Not now. Is it really happening? If it happens now this will be a visit I will never forget. Am I getting into labor?

2014 hit me hard in the face with all its goodies, that it was difficult for me to pinpoint the best moments. I still have one more story to share before I bid farewell and move on. For me, 2014 ended with a blast.

The story actually begins in fall 2013. Shortly after returning from BugShot Belize, I noticed that three mosquito bites on my chest were not going away. They became red, started to feel even itchier, and occasionally there was a slight pinprick sensation. I immediately suspected they harbored botfly larvae, and indeed confirmed this after a couple of days when the sensation became more intense.

Hypoderma bovis is a species of botfly that attacks cattle. The resemblance to a bumblebee is not incidental. Upper Galilee, Israel.

Botflies belong to the family Oestridae, whose larvae develop in the body of mammals as endoparasites. They are mostly known as pests of cattle, but also of rodents and other small mammals. At least one species, Dermatobia hominis, attacks primates and, as I learned the hard way, humans. And it does this in the most incredible way: the female botfly waits in ambush for a female mosquito to pass by, and when the blood-sucking insect shows up, a chase ensues between the two. The botfly grabs the mosquito in mid-air and takes her captive to the ground level, where she proceeds to do something unique to Dermatobia botflies – she starts to lay eggs under the abdomen of the now-immobilized mosquito. When she is done, she releases the mosquito from her grasp. Now the botfly has a carrier, a vessel to transport the eggs to a suitable host, preferably a mammal. Once the female mosquito locates a bloodmeal and lands in order to bite, the mammal’s body heat triggers the botfly eggs to hatch, and tiny larvae drop to the mammal’s skin. They quickly start to burrow into the skin, head in first. Some take advantage of existing pores, such as hair folicules or even the mosquito bite itself. The small larvae have several rings of curved hooks pointing backwards; these hooks assist in anchoring the larva inside the host’s tissue and prevent removal. After fully embedded into the mammal’s flesh, the larva (which is a foreign object) excites the body’s immune system, and feeds on the inflammation response and white blood cells that arrive to the area. Its only connection to the outer world is through the entrance hole, now called punctum, from which it extends its spiracles for breathing air.

This beautiful mosquito (Psorophora sp.) is known to be one of the vectors for D. hominis eggs. Photographed in Belize, in the same location where I got my botfly larvae.

When I first learned about Dermatobia hominis in Intro to Entomology course back in 2004, I could not help but wonder how it feels to have an insect living inside one’s body; whether it is painful; and does it show on the outside? Little did I know that I would become a host for the same species 10 years after. Well, it was painful indeed. Sharp, ticking pains that came and went in cycles. I immediately sought medical advice and came across a medical paper describing a method for removing botfly larvae using a suction pump. Fortunately for me, the leading author of the paper was a bus drive away. There was much excitement at the Tropical Diseases Clinic, when several doctors and medical students gathered to see my botflies. We removed three tiny larvae, and I was released home. Then, in the evening of the same day, I felt that sharp pain again from all three locations. Over the next days, the pain became worse, think of chest-stabbing, or corkscrewing in pulses with heated iron and you get the idea. There were larvae still in there. And it seemed they were growing faster because there was no competitor in there with them (the larvae we already removed). To make a long story short, I managed to remove one of these larvae (on Halloween Eve nonetheless!), accidentally killed another at the clinic (only to be removed later by me), and failed to remove the third one. It continued to remind me of its existence with pseudo heart attacks several times every night until it finally died and the punctum sealed over it.

This was quite the experience, and we even published a report of the case in a medical paper. Originally, I wanted to keep one of these larvae until completion of its development. As an Entomologist, I was eager to see the adult fly, let alone this might be the only chance I could give something in return after collecting and killing many insects for my scientific work. However, I was not lucky, and I started to accept the possibility that I will not get another botfly larva, surely not in such a convenient location again. And so, a year later I returned to Belize, not even considering the option that it might happen again. Remembering the lancinating pain that I experienced, I tried to be careful and well-protected from mosquitoes this time. So you can imagine my surprise after I returned home, when I found a new botfly larva in my chest, almost in the same location as last year!

At first I repeated the “routine” of visiting the Tropical Diseases Clinic, but the larva was still too small to be removed. Then I decided to leave the area as is and give the larva the space it needs. I was amazed to find out this larva was not even slightly painful. The feeling was completely different, I could easily feel it moving, but there was no discomfort about it. This is it. I am keeping it.
Maybe I should pause here and say that a botfly is probably the “friendliest” parasite one can wish for. It does not transmit any diseases, does not cause any significant damage to the body, does not leave any scars, keeps its area clean from infections by antibiotic secretions and most importantly – unlike other parasites, once it finishes doing its thing, it leaves on its own!

Portrait of human botfly (Dermatobia hominis) larva. The resemblance to a walrus is incidental.

For more than two months I nurtured the larva, patiently observing while it was growing inside me. Photographing it was not easy, and essentially could only be done facing a mirror, but I learned the trick and eventually got used to operating the gear backwards. It allowed me to take this photo of the larva’s spiracles as it is breathing from the punctum (this might be graphic to some people, so you can view it here). But like I said my real goal was to see the adult fly, and I was restless in the final two weeks of the larval development in fear that I will miss the event. The botfly larva does not pupate inside the host. It first has to leave its host’s body, drops off to the ground and then quickly looks for a suitable place for pupation. In the end, the contractions I felt at the dentist were a false alarm, and I could not feel anything when the larva emerged eventually.

Human botfly (Dermatobia hominis) larva after emergence from its host, searching for a place to pupate.

Incubating the puparium has to be the hardest part in keeping a human botfly. In a fascinating paper from 1930, Lawrence H. Dunn describes how he deliberately allowed two botfly larvae enter his arm to document their development. Only later he found out that prior to his actions he was already infected with four additional larvae (on his other arm and leg). The paper is not an easy read, as it spans through the various sensations and types of pain the author experienced during this period. Eventually he had all his six larvae emerging as late third-instars, pupating and turning into adult flies. Unfortunately, this last part of the paper is poorly written and lack details. How moist was the pupation substrate and what was its composition? Did the larvae burrow or stayed on its surface? How long after emergence the adult flies started activity? And were there any losses during the pupation period? That last question is extremely important because I have heard of many failures in keeping Dermatobia hominis for the purpose of getting adults, and they mainly happened during the pupal stage. This is why I was so thrilled to find the adult fly one afternoon waiting in the container. What a great ending to 2014. And what a magnificent fly it is! Glowing red eyes, a pointy head with a bright silvery “face”, and the most dazzling blue abdomen, striking with metallic gloss. For me, this was literally the miracle of birth. No matter how I look at it, this fly is my own flesh and blood. 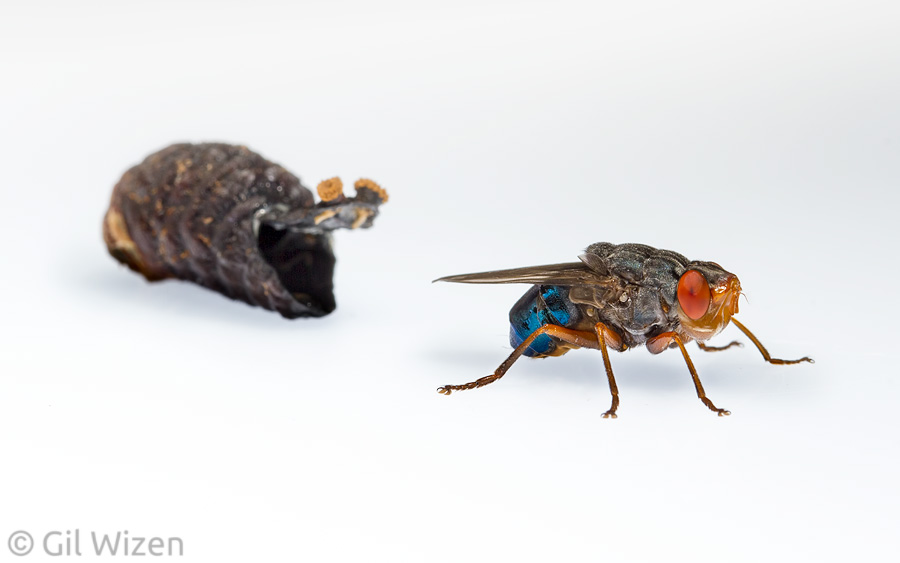 Larva and adult of the human botfly (Dermatobia hominis). Hard to believe this is the same animal.

In this day and age, even a fly can take a selfie.

Was it worth it? Absolutely.

Piotr Naskrecki had his own personal experience bringing (two!) botflies to adulthood. You can read his blog post here. And do not miss the postscript!

UPDATE (12 Jan, 2015): Piotr has just posted a video about his botfly. Please go to his blog and watch it. I cannot recommend it enough; this is most likely the only filmed documentation that follows the botfly throughout its development to adulthood in a human host:
http://thesmallermajority.com/2015/01/12/dermatobia-redux/
Thank you everyone for the positive response to this story!

10 thoughts on “Giving birth to a botfly”