Many insects deploy mimicry to fool their predators into thinking they are highly defensive, venomous, or simply not to be messed with. A great fraction of mimicry cases involve adopting the appearance of ants, wasps, and spiders for these exact reasons. One of the most interesting cases, however, is predator mimicry: insects that take the appearance of their potential predators in order to expose them. I have already written about one such case in crambid moths, but in this post I want to present one of the classic examples for this mimicry in metalmark moths of the genus Brenthia.

At first glance, metalmark moths do not really resemble spiders. In my post about Petrophila moths I mentioned that observed spider mimicry might also be a case of pareidolia. In other words, we as humans seek familiar patterns surrounding us, so we recognize the image of a spider on the wings, but is it really mimicry? And indeed, after posting I was accused of having a strong imagination for thinking this is mimicry. There is a good point being made here – in the case of Petrophila there is a temporal barrier preventing the two from encountering each other under normal conditions. Petrophila moths are nocturnal while jumping spiders are diurnal. Nevertheless, the prevalence of such wing patterns in the insect world suggests that they have a role in the survival of those organisms.

Brenthia moths are no different. It takes some imagination to strip them off their mothy characteristics to see the resemblance to jumping spiders. Members of family Choreutidae, the genus contains over 80 described species, all sharing the same appearance: a unique body posture, and wings patterns that are reminiscent of jumping spiders’ eyes. In fact their common name, metalmark moths, is due to the convincing “catchlight” area of the eyespots, often consisting of silvery scales. Brenthia species also move like jumping spiders, advancing by short bursts of movements while still retaining their wing display. Lastly, these moths are diurnal and can be seen active on top of leaves, just like salticid spiders. If you think it ends there for these moths in regards to anti-predator defenses, let me also add that their caterpillars deploy defense strategies as well. When alarmed, they launch themselves through holes chewed into the floor of their webbed feeding shelter, giving the term “teleporting through a wormhole” a new meaning.

Portrait of a jumping spider (Phiale formosa). It is a little difficult to see the resemblance to the moth’s wing patterns, but the important thing is that it works to the moth’s benefit.

When discussing animals mimicking their predator, it is important to remember that we humans are not the target audience. This means that the imitator may not look too convincing in its mimicry to us, but still manages to trigger a desired response from said predator. However, when in doubt, the best way to know for sure is to put the suggested mimicry to the test through a series of experiments. Brenthia moths have become one of the best examples of spider-mimicking moths, thanks to rigorous testing. In their classic paper, Rota and Wagner placed the moths with their potential predators, jumping spiders of the species Phiale formosa, in arenas and recorded the outcome. They also used non-mimicking moths of the same size as control for the experiments. The results showed that the jumping spiders respond to Brenthia by displaying territorial behavior and waving their forelegs. In other words, upon noticing the Brenthia moths the spider predators immediately expose themselves. It comes as no surprise that Brenthia moths had a high survival rate in the experiments, as they could take off once the danger was revealed, avoiding predation. The control moths did not trigger a territorial response from the spiders and were preyed upon extensively. 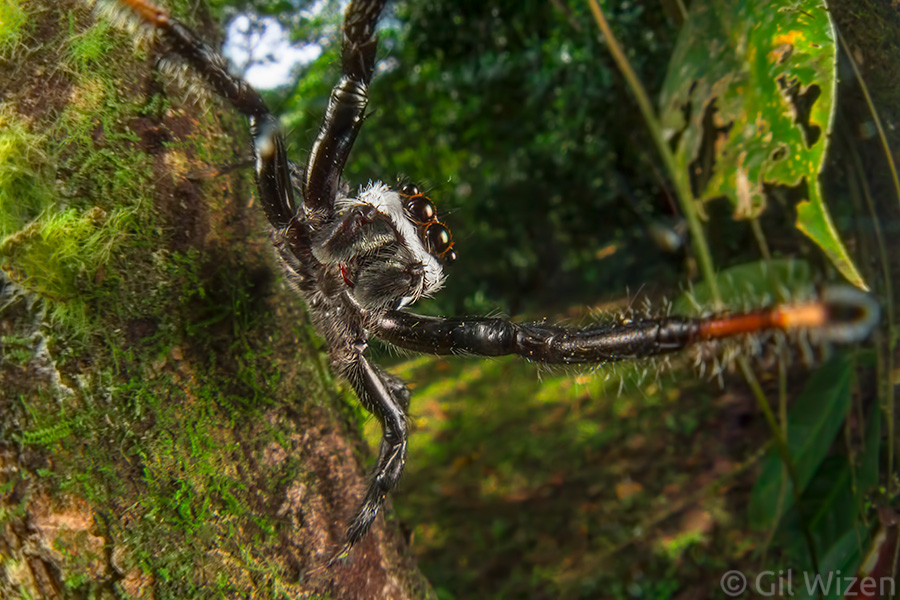 Jumping spider (Phiale formosa) displaying territorial behavior in response to its own image. This is when the moth knows it is in danger.

One thing to keep in mind though is that this mimicry works well only because salticids are special among spiders. They do not make a web to capture prey, but instead rely on their excellent vision to detect prey. They are active predators, and therefore display a wide array of behaviors to communicate with other salticids. Jumping spiders will avoid other jumping spiders due to the risk of cannibalism. Brenthia moths take advantage of this behavior to get the higher ground by delaying the spider’s attack in order to escape. This makes them one of nature’s greatest con artists, but when survival is on the line, anything is kosher.