I think the best way to start this post is right at the end. This is me getting tagged by a wandering spider (Phoneutria fera), one of the most venomous and defensive spiders in the world. 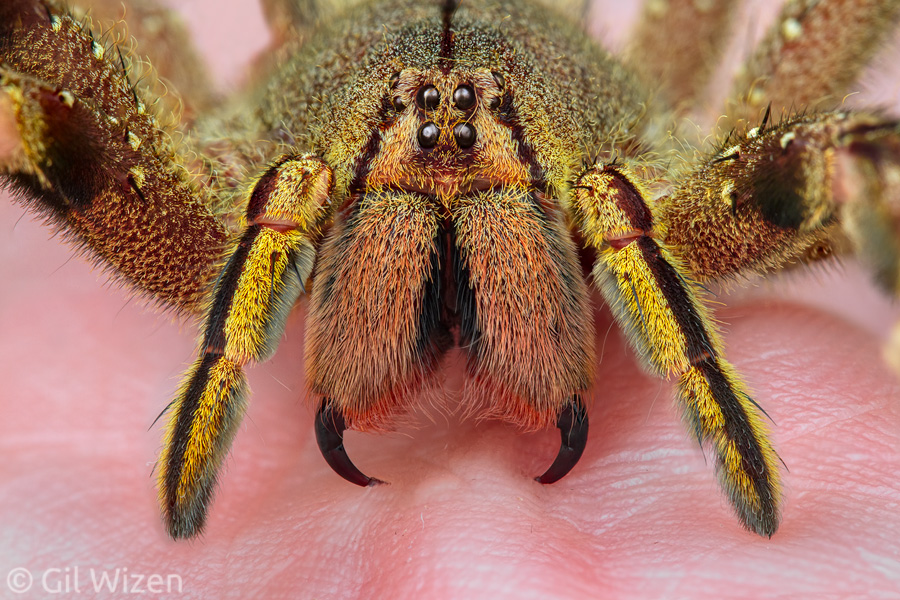 These spiders possess a potent neurotoxic venom that, if delivered at a sufficient quantity, has the potential to kill an adult human. So, I got bitten and yet I am still alive to brag about this? What is going on?

Things are not always what they seem. This is not a real spider bite. In fact, this is not a spider. This animal is maybe 10% spider. I know one day my twisted sense of humor is going to get me into trouble. I should be careful not to ‘cry wolf’ too many times or I will be left with no friends who care for me.

You might remember that two years ago I encountered a wandering spider (also commonly known as banana spider) under my bed when I visited the Ecuadorian Amazon. That female was guarding her offspring, and what I did not know at the time is that they had already started to disperse from the nest. Some of them found their way into folds in my backpack and hitched a ride with me back home. This happens much more often than you would think. Every day small organisms such as insects, arachnids, snails, and also plant seeds, moss, and fungi find their way into new territories with our help whether we are aware of it or not. Now, there is no need to be alarmed – wandering spiders are not going to spread and take over North America. The vast majority of exotic “traveling” spiders are NOT even wandering spiders, and even if they do pop up every once in a while, the cold winter temperatures and low air humidity will finish them off. In my case, I had a dilemma: to kill the spiders immediately, or to keep them for a while in order to learn more and then donate them for scientific work. I chose the second option. It made more sense to use this opportunity to document this species’ natural history. For example, after two years, even with proper feeding, the spider did not reach its adult stage. They must be long-lived. I should also note that I have a background as a professional arthropod keeper so I knew what I was getting into. This is not something I would recommend to inexperienced hobbyists. 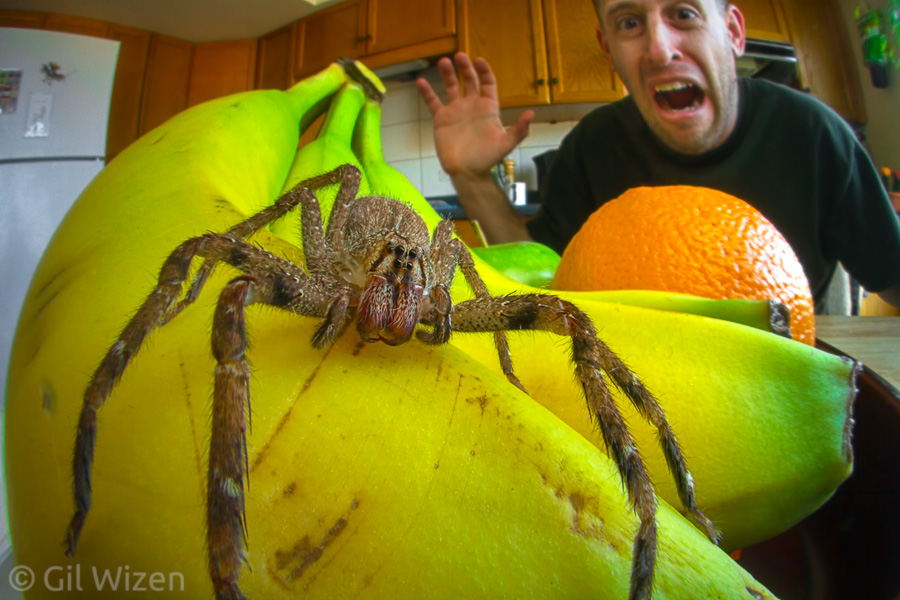 Wandering spider (Phoneutria fera) aka banana spider in my kitchen

Since then, I have been meticulously following the baby spider, sometimes taking ridiculous photos that depict unrealistic situations. Surprisingly, this species seems tamer than its reputation suggests, but caution is always the key. After a while I started pondering the idea of creating an image of the spider in mid-bite. The original idea was to photograph it during feeding, but then a better idea came up. I waited months. Finally, I had what I needed – a fresh molt.

Yes, what you see in the photo opening this post is nothing but an empty shell. The spider itself was resting in its enclosure during the time I took the photo. Like I said, things are not always what they seem.

Even though this was not a real bite from a living spider, it was still painful. Those fangs (chelicerae) are extremely sharp, and they have no problem piercing through human skin. If you search online you will find photos of people handling Phoneutria spiders with bare hands. That, in my opinion, is pure irresponsibility and a lack of judgment. I will never, ever let these spiders anywhere near my hands. And neither should you. Learn to respect and admire these majestic animals from a distance.

3 thoughts on “A Moment of Creativity: A bite from a wandering spider (Phoneutria)”