On my first night in New Zealand, I did something that I always do when I get to a new place – see which insects were attracted to light that was left on. The usual suspects are various species of moths, but sometimes also katydids, antlions and beetles.

To my surprise, the first insect that I found was a large longhorn beetle (family Cerambycidae). With a length of 50mm, hairy body, large mandibles and beautiful elytra reticulated in yellow, one could not miss it resting on the asphalt. I later learned that this was the huhu beetle, Prionoplus reticularis, New Zealand’s largest endemic beetle. 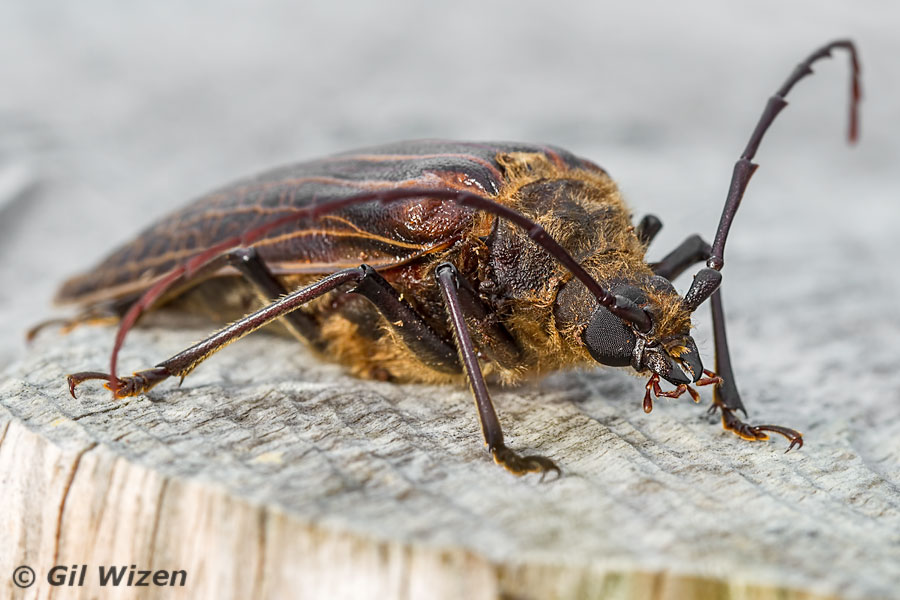 The adult huhu beetles do not feed and live for about two weeks only. These insects spend most of their lives in the larval stage, boring into and feeding on dead wood. They can become pests in sawn timber and logs, eventually destroying the wood and leaving just the outer shell. The larvae are considered delectable wild food and were traditionally harvested by the Māori people to be eaten raw or cooked (note to self: I need to try this). At the end of their growth the larvae reach an impressive body length of 70mm and create a chamber for pupation. The adult beetle emerges from the pupa after 25 days and uses its strong mandibles to break free from the pupation chamber in the wood. The whole life cycle can take up to several years.

The adult beetles appear during the southern hemisphere spring and summer (November to March). They start their activity around dusk, and many of them reach outdoor lights and well-lit rooms in their heavy flight. I often found mating pairs in close proximity to light bulbs.

Many people fear these beetles for no good reason (or worse – I heard people relate to these beetles as cockroaches). The adults look a bit scary with their enormous jaws and long antennae swinging from side to side as they walk, but they are harmless and not aggressive. Well, that is, if they are not provoked. They can still use their mandibles to bite, but their bite is a lot less serious than other bites I got while in NZ (for example, ground weta’s. Stay tuned!).

8 thoughts on “Don’t mess with the Huhu”