When I first came up with the idea of Little Transformers, what I had in mind were insects that can masquerade as other objects by changing their appearance or behavior. I consider myself a “mild” Transformers fan: I like the concept of entities taking the form of other things, very much like how mimicry or camouflage work in nature. I have said before that I am not a fan of the current iteration of Transformers, those movies are so bad. However, I am going to take advantage of the upcoming release of the new Transformers movie (and I cannot believe I am using this as my reasoning) to post about yet another Little Transformer. This one does not really transform though, but it sure looks like one of the robots in those films. While I am not sure who is behind the designs for the robots, it was clear right from the start that there is some insectoid perspective to their appearance. I have always preferred the simple “blocky” design of the original cartoon show, but I can see how that would not look very realistic.

As mentioned above, our Little Transformer may not pass as the best example for a mode-changer, but it has an alien-like appearance. Meet Dysodius, a bark bug that belongs to the family of flatbugs, Aradidae.

Aradidae are cryptic insects, spending most of their time hidden on or under bark, and inside fallen logs. They feed on fungi: at nighttime both adults and nymphs can be seen aggregating near fruit bodies of mushrooms, sticking their proboscis into the soft flesh. It is a fungi cocktail party, and everyone is invited! Some species of Aradidae even display parental care and protect their offspring. Aradids are incredibly flat, a character that helps them to squeeze into tight crevices and take advantage of the complex habitat that is the bark’s surface, in order to remain hidden from the ever-searching eyes of predators.

Lateral view of a bark bug (Dysodius lunatus). So flat it could sit comfortably inside a paper envelope.

Members of genus Dysodius are particularly interesting because of the their unique body structure, featuring curved lobes protruding from the pronotum and a crown of “fins” surrounding their abdominal segments. They also have tiny wings, so tiny that it makes me wonder if these wings are truly functional and can create enough force to lift the insect off the ground. 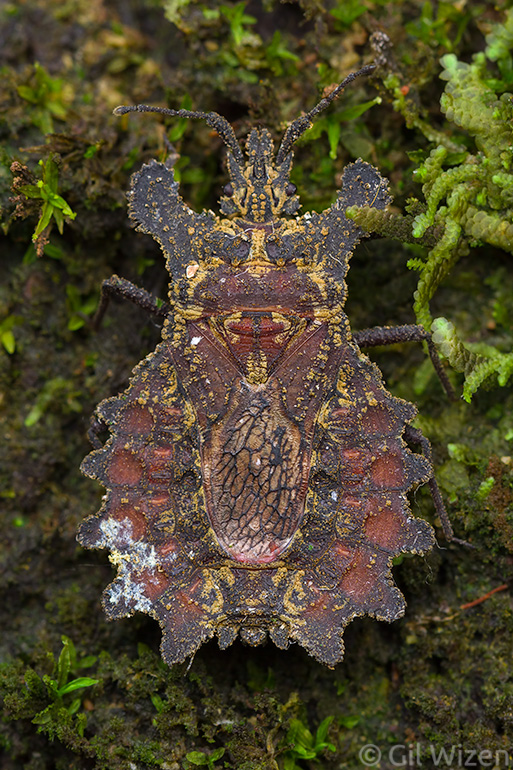 Dysodius are also very slow animals. They usually rely on their excellent camouflage rather than speed to avoid threats.

Their body surface is rough and often mottled with moss-like splotches. It is also wettable just like tree bark, in other words the colors get darker when getting wet by rain (unlike the water-repellent integument of other bugs), ensuring that the insect is still camouflaged even in rainy conditions.

This begs the question why am I including Dysodius in the Little Transformers series? After all, these insects are already “transformed” and do not change their appearance any further. They already look like a piece of bark. To understand why they are mentioned within these posts, you need to view them from the underside.

Bark bug (Dysodius lunatus), facial view. Am I the only one seeing a robot here?

Aradidae, and Dysodius in particular, have one of the most robotic faces in the entire insect world, a face that could easily fit in the current Transformers movie franchise.
If you are not convinced yet, here is a closer look.

So if you think the Transformers movies are cool, insects do it better and have been doing it for far longer time. How does that quote from the trailer go?

“A thousand years we’ve kept it hidden. The secret history of Transformers…”

It was hidden all right. But not anymore. I am slowly unearthing this secret, exposing the existence of Transformers right here under our nose. You’re welcome.