In my previous posts I mentioned that there are three animals I was eagerly expecting to see during my time here in New Zealand. It’s time to end the series and present my final “must-see”, which includes two of my most favorite invertebrates (I cheated a little. Not a single “must-see” animal but two. But who cares? The more the merrier!).

I spent two weeks at Otago Peninsula, in southeast South Island of New Zealand, and overall the area looked relatively dry to me, with very little tree coverage. For this reason I was very surprised when I heard about a population of velvet worms in the nearby city of Dunedin. Immediately I packed my gear and drove to the place. I soon learned that the site not only harbors a relatively large population of these amazing creatures, but also functions as an actual nature reserve for protecting the velvet worms. 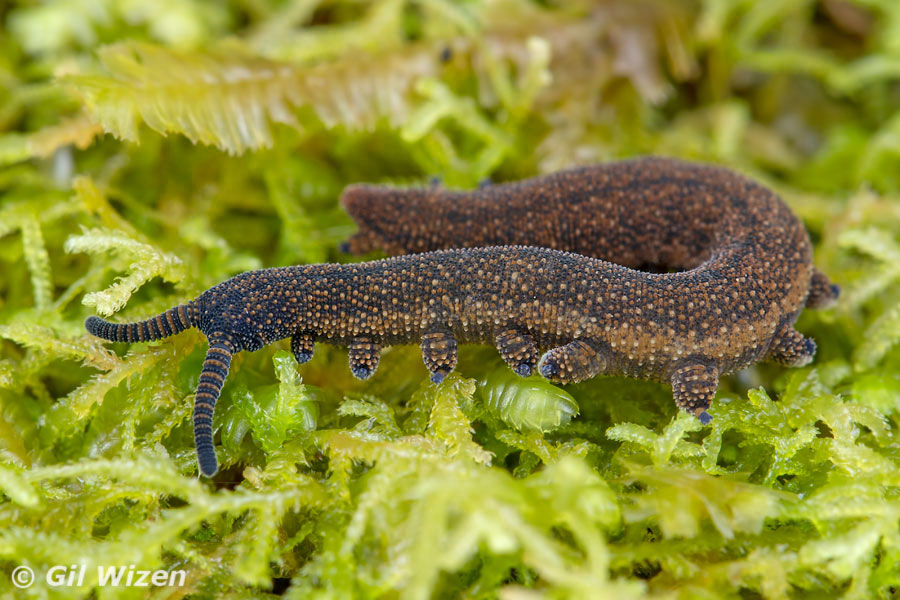 Velvet worms belong to phylum Onychophora (“claw-bearers”) which shows characteristics common to both phylums Annelida (segmented worms) and Arthropoda (insects, arachnids, crustaceans and myriapods) but is now accepted as closely related to the the latter. They have a soft, segmented body with a velvety appearance, tiny beady eyes, thick antennae and multiple pairs of legs. Each leg ends with a hardened pair of claws, hence the group’s name. The first pair of legs is highly modified to shoot slime during prey capture. Yes, cute as they may seem, all velvet worms are nocturnal predators, actively hunting insects and other invertebrates on the forest floor. They are highly sensitive to desiccation and move away from light. During the day they rest in humid hiding spots such as in rotting logs and between leaf litter. 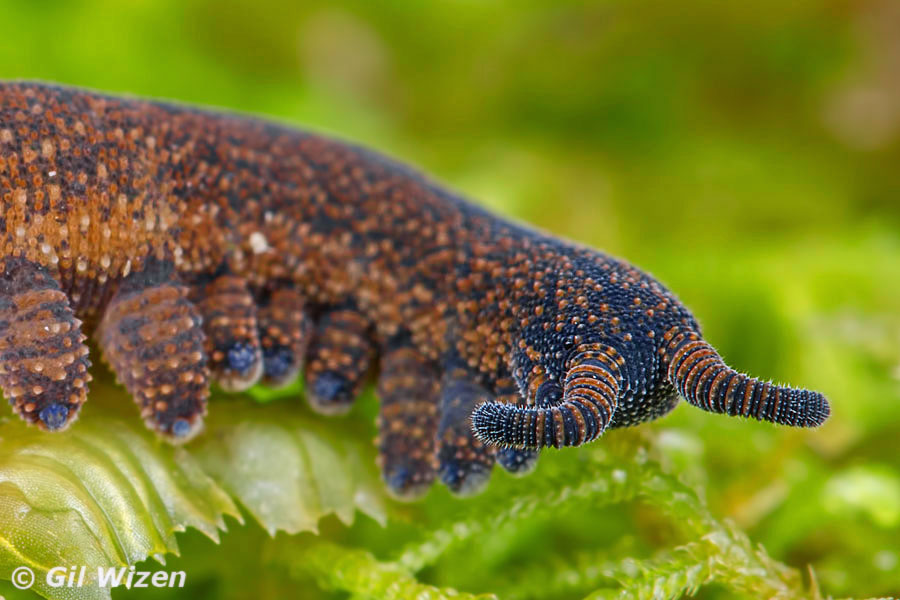 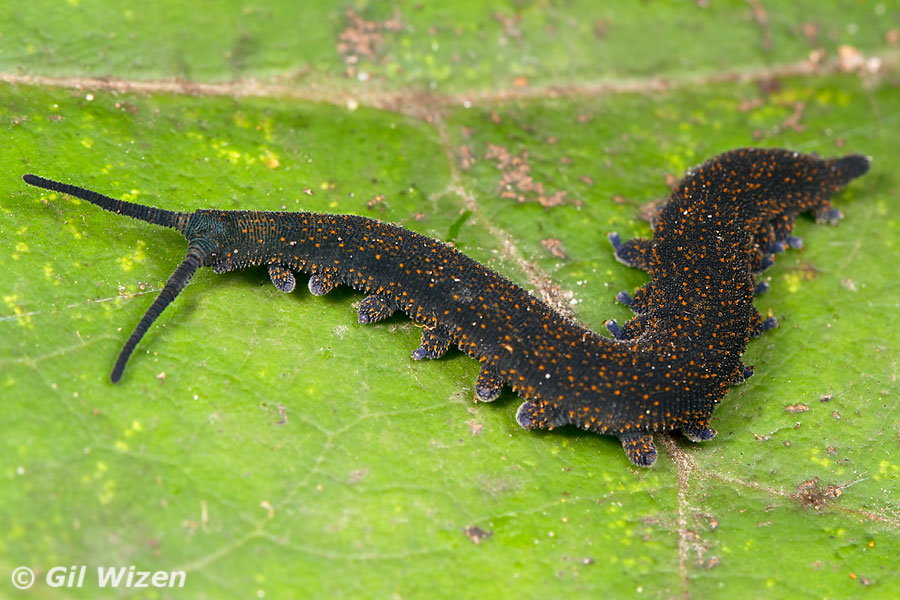 The only species I saw in New Zealand is Peripatoides novaezealandiae which is the most common. It is variable in body coloration – the Dunedin population is mostly brown-orange in color, while in other locations they seem to have a predominant blue color speckled with orange. This species is ovoviviparous – the eggs retain inside the female’s body until hatching. There are also oviparous species in New Zealand (genus Ooperipatellus) in which the female uses an ovipositor to lay eggs. 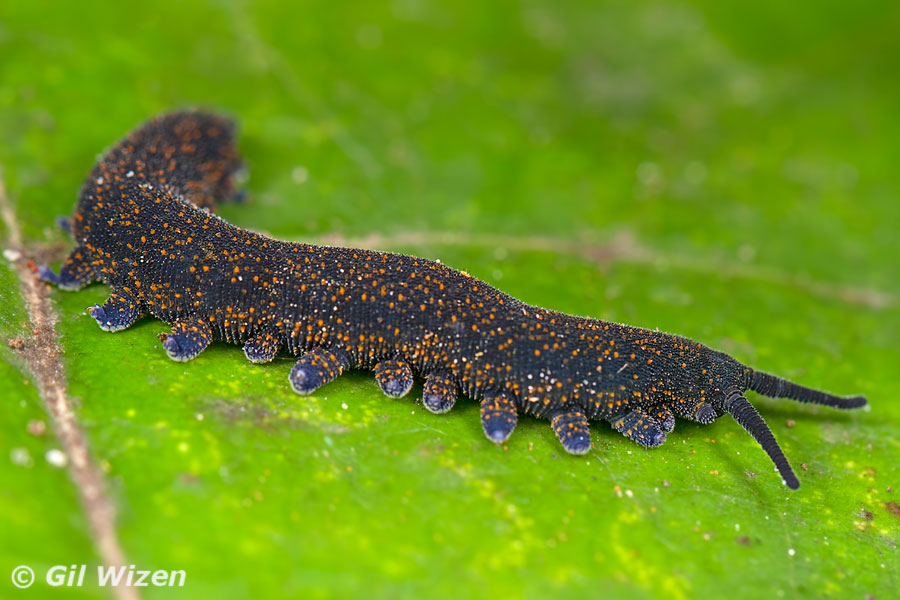 As a side note, I think everyone should know this animal, children and adults alike. It is both “kawaii” and a voracious predator. I has “guns” that shoot glue. Some species have stunning colors such as indigo blue, orange and even pink. It is one of the coolest invertebrates out there. I confess that I wish I could get a toy onychophoran. WeirdBugLady took the initiative and created the first velvet worm plush toy (check out more of her awesome stuff here). While it looked great (especially the blue one!), I felt that something was missing to give it a genuine velvet worm look (for example, I wish the legs were facing downwards and bore claws). This is where I cease from talking science and turn to all you plush toys manufacturers out there – why aren’t there more invertebrate toys? Children are more likely to encounter small creatures rather than panda bears, elephants and penguins in their lifetime so I don’t see any reason why they should not learn something about them. In turn, this will help to create a better educated public that will respect instead of unjustifiably fear these misunderstood wonders of nature. For your consideration. 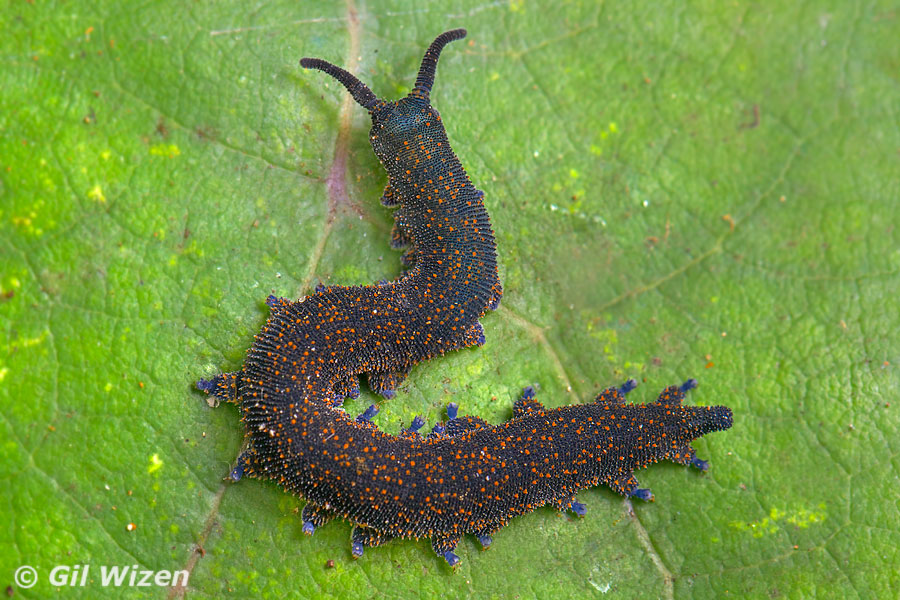 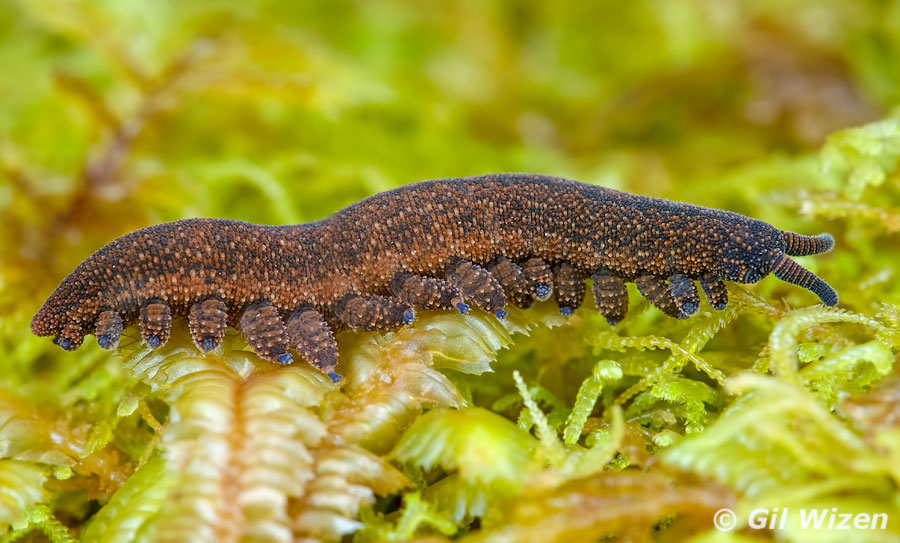 Someone throw him some sneakers.

Back to velvet worms: Onychophorans remained largely unchanged in structure for about 500 million years. They are a relic from the ancient continent Gondwanaland, and are distributed in tropical and temperate regions of the Southern Hemisphere. So why did I insist on seeing them in New Zealand of all places? I could have found them in Africa, India, Indonesia, New Guinea, Australia, South and Central America, even in one of the Galapagos Islands. The answer involves another one of those “six legged-mammoths” New Zealand is most famous for.

Six legged mammoths? Tusked weta again? No, this time I am talking about an arthropod many times smaller. But it is still a giant among its kind – the huge springtails of the genus Holacanthella.
Springtails (Collembola) are fascinating little creatures that are found in leaf litter, under logs and stones and in the soil. They resemble insects by having six legs, however, they are excluded from this order for having internal mouthparts and being wingless. Most springtails have a device called furcula at the tip of their abdomen, which they use for jumping when threatened. Their small body size (usually just a few millimeters) allows them to leap out of range of danger. Holacanthella species however, have a larger body size (up to two centimeters in length!) and are too big and heavy to lift themselves up to the air. For this reason they have lost the furcula and cannot jump. They are blue-grey in color, and their body is usually covered in brightly colored spiky projections, making them look like minute porcupines. These beasts are saproxylic organisms that are associated with dead or decaying wood, but they are not very common. While searching for Peripatoides inside a rotting log, I was very happy to find two species of Holacanthella. The first one was H. brevispinosa – not huge like I expected (body length is up to 6mm) but very hedgehog-like in appearance, with yellow tipped digitations.

Once I started going in deeper into the decomposing wood I exposed a large group of a second species, H. paucispinosa. This species is much larger (body length of 13mm), flatter, with less spikes, and the lateral spikes are longer than the dorsal ones. The ones I found had yellow digitations, but I know there are variations among different populations, and some individuals have orange or red digitations.

Despite their large size, apparent aposematic coloration and pointy projections, the sad truth is that giant springtails are defenseless. Without the springing mechanism that allows them to escape predators, they are essentially sitting ducks. Many of them fall prey to spiders, centipedes and yes, velvet worms, which occupy the same habitat. 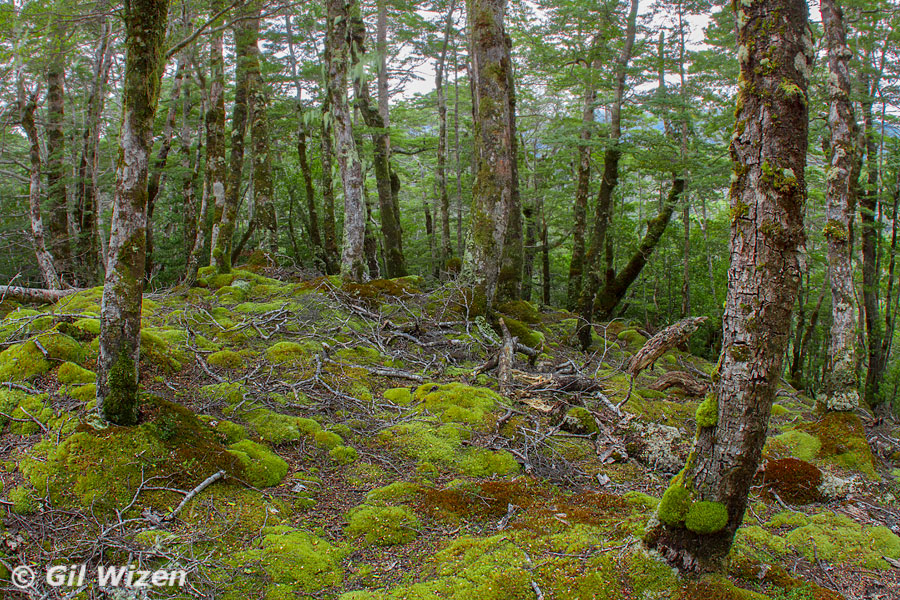 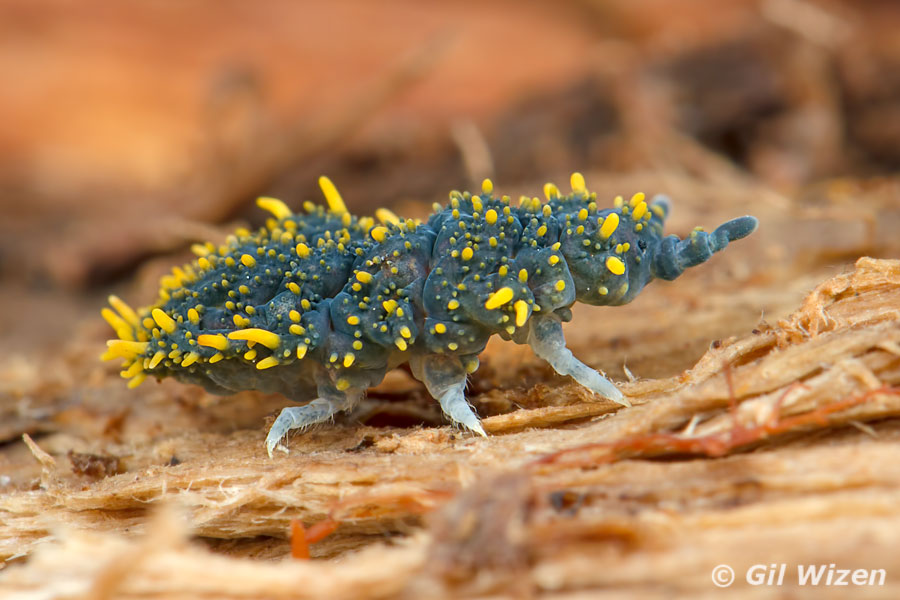 The interesting thing about Holacanthella is that these springtails are usually skipped over by Entomologists when mentioning New Zealand unique invertebrate fauna. I cannot see the reason why. They are big, colorful, relatively speciose with most species overlapping in distribution (which makes it easier to locate them in the field), and they have an important role in breaking down organic matter in decaying wood. How can these beauties be overlooked?