New Zealand is home to an astounding high number of endemic birds, for this reason it is often referred to as the “land of birds”. As the end of my research trip approached, I tried to think which of the bird species I came across left the most impact on me.
To my surprise it was not any of the famous NZ birds; I never had a chance to get to Maud Island to see the Kakapo; the Tui and the bellbird are beautiful but I didn’t find them that interesting, the same can be said for the yellow-eyed penguins and the giant NZ Pigeon; and kiwi reminded me of a beaked rat with bad case of platfus. Could it be that something happened to me in Canada that was clouding my judgment?

You see, I was born in Israel, and the most common animals I saw in the vicinity of my house were crows, stray cats and rats. Do not get me wrong: I am not saying that Israel does not have an interesting fauna, on the contrary! The biodiversity in Israel is amazing (and from many aspects even much more interesting that that of… New Zealand). However, if you live in a big city, these animals I mentioned are the ones you will see most frequently.
But I had already been living for a year in Canada before I took the trip to New Zealand, and being surrounded by tame squirrels, brave chipmunks and fluffy rabbits had its effect (well actually, I always had a thing for rabbits). I am not even going to talk about the freakishly tame deer that are all over the place. So when I got to New Zealand the first animals that left an impression on me were the ones who were not afraid to check me out from up close.

I met the first bird species on my first night alone in New Zealand. I left my PhD supervisor at the ferry terminal and drove to a town called Okiwi Bay, a lovely place. I found a good spot to pass the night in the forest, looking for weta. In the morning, I woke up to an amazing view of the turquoise blue water of the bay, peeking through the canopy. Just as I was appreciating this magnificent sight, I heard a loud “Nee! Nee! Nee!”
Of course the first thing that came into my mind were the knights from Monty Python and the Holy Grail, but I set out to look for this mysterious animal. And it was sitting on a branch right above my head. First I saw a white hand waving to me from the branches and I had to pause for a second because I wasn’t sure what I was seeing. 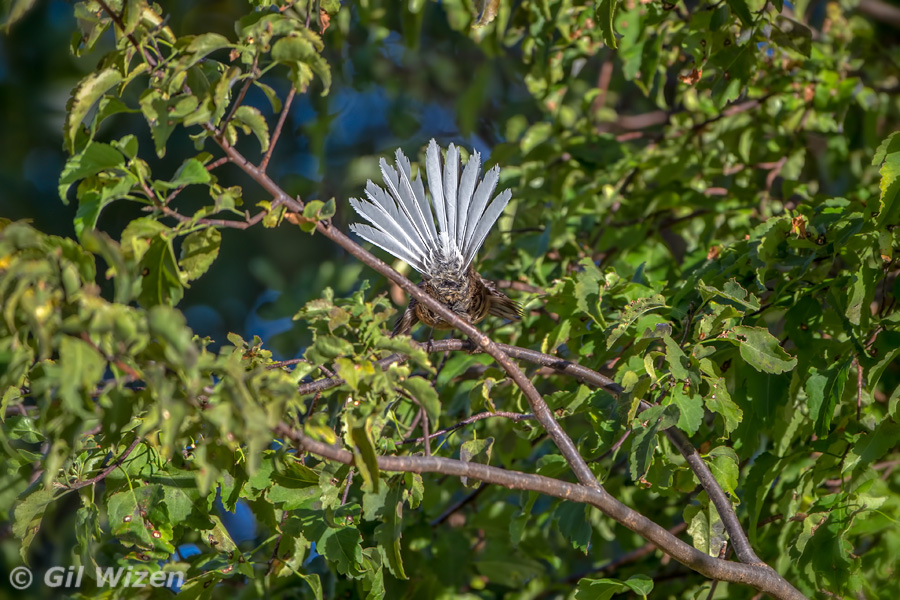 Then I saw that this was actually a bird the size of a swallow.
It was a fantail.

The New Zealand fantail (Rhipidura fuliginosa) is probably the bird you are most likely to see if you come to NZ. It is a very common, relentless bird, constantly moving and calling. These birds are not afraid of people, and very often approach to feed on flying insects that hover above your head. This behavior made it very difficult to photograph the bird, because when using a long telephoto lens the fantail would often come too close for an appropriate working distance. When I think about this, I kick myself in the head because these birds are everywhere in NZ, and I cannot believe I do not have a single decent photo of a fantail… They are grey in color with a white or pale grey tail, which they display open almost all the time. There is also a “black version” of this bird, I got to see it twice throughout my trip, but it was too concealed to get a good photo.
I immediately fell in love with this bird. There is something so adorable in its rapid movements and cutesy calls that it looks like it came straight out of a cartoon.
Do check that link by the way, you will not regret it.

The second bird species took interest in me while I was searching for Holacanthella springtails. I was digging inside a rotten log when suddenly I saw a beak snatching a spider that I exposed while working. I raised my head, and saw a small grey songbird standing 15cm from my face. I cannot even describe the feeling to you. The fact that this wild bird, which I have never seen before, was interested in what I was doing and decided to join me. It was priceless.

I soon learned that the South Island Robin (Petroica australis australis) is another brave bird that will often come to check what humans are doing in its territory.  I took advantage of this, and experimented just how close the bird would get. The answer – pretty darn close! If you are exposing prey items, or better, if you are offering the robin a prey item, it will come fearlessly to take it from your hand. Unbelievable. This is a wild bird, I remind you!

This behavior also creates excellent opportunities for some macro photography, something that is sometimes difficult to achieve with small birds. It is very rewarding to see all the tiny details in head feathers. At the end of the day I felt bad for leaving the bird alone in the forest. It really felt like there was someone else there with me. This is probably something that only people who work alone in the field can relate to.

Working together in the field to discover arthropods, me and my new buddy

I will probably write a post about the other NZ birds that I mentioned, or at least post some photos of them. But if you like birds, the best tip I can give you is – go to New Zealand. You’ll feel like you’re in heaven.