Last week I met with Catherine Scott and Sean McCann, two talented naturalists and spider-enthusiasts (Catherine studies the mating behavior of black widows, and if you haven’t already, I recommend following her live tweets from experiments). It was great to go hiking together in the snow-covered woods, looking for arthropods hidden inside fallen logs. Before we went on the hike, they brought me a few entomological presents, one of them were lovely beetles that they found during a trip a week earlier.

These magnificent beetles are Neomida bicornis, a species of fungus-feeding darkling beetles (family Tenebrionidae). They are tiny, measuring only a couple of millimeters in length. To the untrained eye they do not even look like darkling beetles, these beetles are like jewels! Their body is very shiny, metallic green in color. The elytra have a bluish tint. Populations of Neomida bicornis in southern North America have an orange pronotum (a true feast of colors, for a darkling beetle at least). The males are characterized by four horns, two of which prominent between the eyes, and two smaller ones on the clypeus (=lip area) above the mouth. The females have no horns. I admit, I have a soft spot for horned insects. What a fabulous gift, thanks again you guys!

These beetle are tiny! That’s the tip of a regular ruler with a millimeters scale.

This species is not rare, but its way of life makes it hard to find: the adults and larvae feed on bracket fungi (polypores) and burrow into this tough substrate, creating inner galleries. According to Sean, these beetles were active inside the mushroom despite the somewhat low ambient temperatures. From what I learned about eastern North American fungus-feeding tenebrionids, they have overlapping generations. In other words, both adult beetles and their larvae can overwinter inside the mushrooms. I will probably try to confirm this at some point but first I need to find out how the larvae look like. They are not the only arthropods taking advantage of a polypore-type shelter from the cold weather. 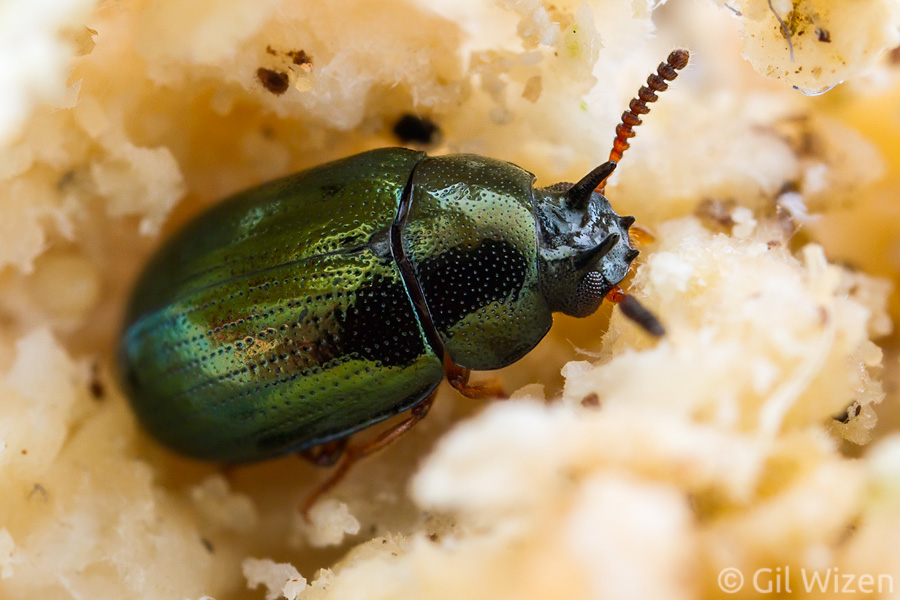