After a long hiatus of nearly 5 months, I thought it is about time I shake the dust off this blog and return to posting. This month we are celebrating Arachtober, highlighting spiders and other arachnids to promote appreciation and understanding that these animals are crucial to the normal function of ecosystems, and that they have their rightful place on this planet. Today is also International Jumping Spider Day, so it is a great opportunity to discuss something interesting that some of these cuties share.

Last February I was fortunate to spend a week in Colombia for a photography assignment. In one of our day hikes I checked a cluster of hanging vine flowers to see if there are interesting insects hiding inside. I did not find any insects except for ants, but as I was peeking inside the inflorescence I saw a row of shiny eyes staring back at me. I thought to myself – Oh, cool. A jumping spider. And indeed it was a salticid spider, however what I thought were eyes was nothing but a deception. In fact the spider’s head was facing away from me, and it was busy munching on a small moth.

Male Parnaenus jumping spider playing peek-a-boo. These spiders become even more interesting when viewed from behind. 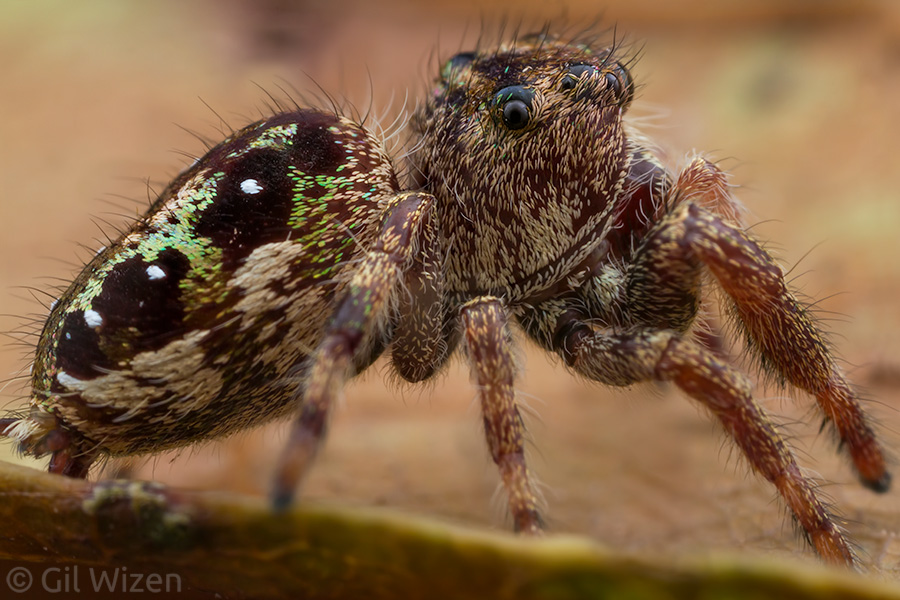 Female jumping spider (Parnaenus sp.). They are much cuter when looking straight at you!

Even though there are almost no identification keys for jumping spiders from the neotropics, I am confident that the spider I found was a female Parnaenus. For the most part these are plain looking jumping spiders, but their abdomen is usually covered with blue and green iridescent scales. On both side of the abdomen they have a row of spots that look exactly like jumping spider eyes. In fact, due to the contrast with the colorful abdomen, those spots are even more noticeable than the spider’s actual eyes. And it’s not just the female Parnaenus that possess these spots; the smaller and more colorful males have them too.

Dorsal view of a male jumping spider (Parnaenus sp.). From this angle you can see how easy it is to mistake the spots on the abdomen for eyes.

Jumping spiders are visual creatures. They rely on visual cues and their good eyesight to detect prey, competitive conspecifics, and potential mates. This is why many species of jumping spiders developed complex color patterns to assist in communication with other individuals. Other arthropods also take advantage of this and deploy mimicry to fool these spiders and avoid predation. One of the most common jumping spider mimicry is the presence of eyespots arranged in a row, to resemble the spiders’ large frontal eyes. I have already written about such cases on this blog, usually demonstrated by moths, but other insects as well (see here and here for examples, or check this paper for a summary). This mimicry seem to exist in some non-salticid spiders as well. On the other hand, we have also seen jumping spiders using mimicry to resemble insects. What we have not seen yet though, is jumping spiders mimicking jumping spiders. Is this even possible? Well, yes and no.
Yes, because there are definitely jumping spider species that display a clear salticid eyespot pattern away from their head where their actual eyes are – like the Parnaenus species presented in this post. And no, because we have no evidence that they are truly mimicking other jumping spiders.

A closer look at the abdomen of a male Parnaenus jumping spider. False eyes between green and blue scales.

This spiderception is quite confusing. At first it looks like the salticids deploy a “false head” anti-predator tactic in order to fool their predators and direct their attacks away from the animal’s real head. But in the case of these spiders the eyespots pattern is located on the abdomen, the most vulnerable part of the spider’s body. On the other hand, if they really use this pattern to communicate with other jumping spiders, we would expect to see a specific behavior associated with it, like waving the abdomen or displaying it in front of another individual. And to the best of my knowledge there are no such observations in existence. 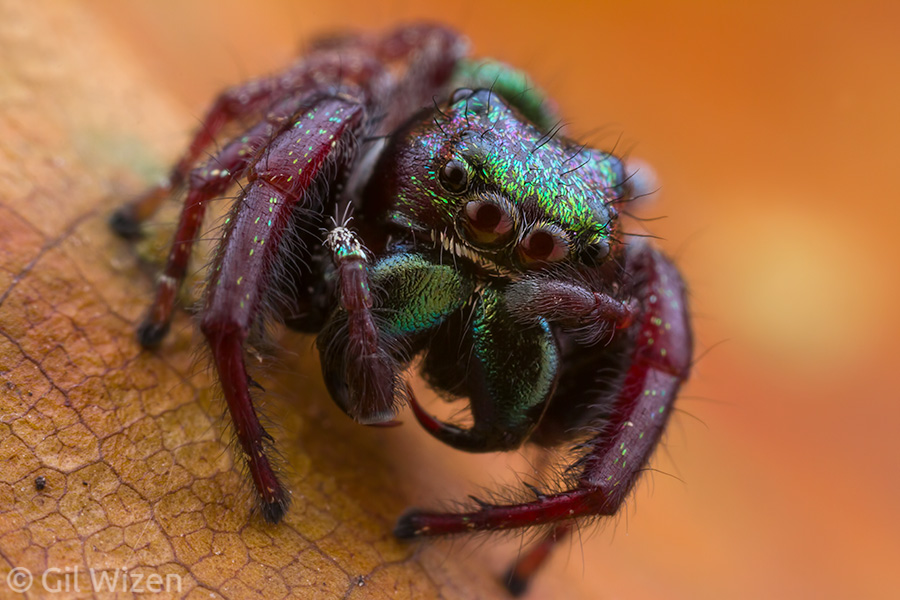 Parnaenus is not the only jumping spider genus that has eyespots on its abdomen, by the way. Other dendryphantine jumping spiders possess this character, to varying degrees. Those include the beautiful Paraphiddipus and Metaphiddipus jumpers and the scorpion spiders of genus Lurio. The latter is a very unusual jumper – the forelegs are disproportionally robust and long compared to the others, both in males and females.

Scorpion spiders (Lurio sp.) have a color pattern on their abdomen that is very similar to that of Parnaenus spiders.

Female scorpion spider (Lurio sp.) guarding eggs. Even without the pretty colors these spiders are very unique, with their long thick forelegs.

The salticid eyespot pattern is quite common in nature, and it seems that possessing it positively affects the bearer’s chances of survival. Even jumping spiders themselves have it on their body. But do they really use it for active communication? Or is it more a passive way for them to say ‘I am a jumping spider inside and out’? Those are questions that are still left unanswered, at least until someone follows and documents their behavior.