UPDATE (12 Oct, 2021): Since publishing this article in 2014, I have been informed that the spider species I encountered is not Phoneutria boliviensis, but Phoneutria fera. The following text has been corrected accordingly.

After a long break from updating this blog and some travels for fieldwork I am happy to return. And I have many stories up my sleeve. In fact, too many of them.

I have been extremely fortunate to travel to the rainforest in Ecuador, one of my favorite destinations. It is somewhat difficult to explain my attraction to the tropics – it is not a friendly environment, especially if one is actively seeking for “trouble” like I do. However, the opportunity to disconnect and escape from the noisy, crowded urban environment that overwhelms my senses with stimuli, and replace this with lush natural habitat, with equally overwhelming stimuli, but ones that actually make me think and not vice versa, is the meaning of true happiness for me.

I returned a third time to a reserve in Napo province within the Amazon Basin of Eastern Ecuador. Many things have changed since my last visit but it also felt like I never left. One of the only places I feel “at home out of home”.

On my third morning at the reserve, I could not help noticing that there are tiny spiders everywhere in my room: they were on the mosquito net, crawling on my backpack, climbing on my gear, and resting inside my clothes. They were everywhere. I knew there had to be a hatched egg sac somewhere close, and it seemed to be inside my room. After some time observing the baby spiders, I traced the source of the spiderlings to one wall, somewhere close to the floor, in the area where my bed stood.

You can imagine my surprise when I looked under the bed and saw this:

Female wandering spider (Phoneutria fera) and her thousands of babies under my bed.

Not only there were literally thousands of spiderlings under the bed, right beside them rested one of the biggest “non-tarantula” spiders I have ever seen. Its body length was 45mm but with its leg span it could easily cover my hand. I immediately recognized the genus: Phoneutria, a wandering spider that belongs to the family Ctenidae.

Wandering spiders receive a lot of attention from the media mainly due to their medical importance but also due to misidentification of spiders that occasionally arrive with cargo originated in Latin America (a detailed explanation for this is here). Members of the genus Phoneutria are known to be harmful to humans due to their aggressive behavior and potent venom. However, this is usually over-exaggerated, and only two species from the genus are considered to be dangerous: P. nigriventer and P. fera. According to the distribution on the west side of the Amazon basin, I suspect the spider I found to be P. boliviensis, the smallest species of the genus, and also the least aggressive and dangerous (EDIT: I was wrong. See update at the top of this post).

This was not the first time I see this species, by the way. In 2007, I visited the same reserve with a colleague, and on our first night I saw an adult Phoneutria running across the outside wall of the very same room. At that time I had no clue what I was looking at, and it registered as a “huge ctenid spider as big as my hand”.

The Phoneutria fera spider was feeding while guarding the babies. Good to know that there was someone taking care of those tropical roaches and kissing bugs under my bed!

I slowly approached the spider, crawling on my belly, camera-in-hand. When I got close enough I noticed that the mother was feeding on a large insect. From bits and pieces that were scattered below the spider I realized the prey is a blattodean nymph, member of the genus Blaberus. These are among the largest species of cockroaches, so this prey was not only challenging to capture, but also provided a decent meal for the hungry female while guarding her offspring. In general, Phoneutria spiders are efficient nocturnal hunters that feed on large insects but also on vertebrates, such as frogs, lizards and small rodents.

The Phoneutria fera mother enjoying her meal unalarmed by my presence

While I was very happy to find this spider, I was a bit reluctant to sleep above one of the world’s most venomous spiders. I had a series of unfortunate events lately, and I did not want to add that kind of story to my résumé. I debated whether I should take the adult spider out of the room. I did not like the thought of separating the mother from her babies, but spiderlings are known to be independent right after their first molt, and most of them end up being cannibalized by their siblings anyway. In addition, there are several reports stating that Phoneutria females guarding an egg sac are a bit more toxic than females without egg sacs. For these reasons I decided to gently direct the spider into a container without aggravating it, and then release it into the rainforest.

Surprisingly, the spider was not aggressive during this short transfer. In fact, it was one of the most docile spiders I have seen. It is possible that it was relaxed from feeding, though. When I took a step back, the spider immediately erected its body and lifted its front legs, revealing beautiful aposematic coloration on its underside. It stayed like this for some time, allowing me to get a little closer and to experiment with photography. I started to get used to its behavior and got closer with my camera until I almost touched the spider with the front element of the lens. It seemed that the spider couldn’t care less for this. Then it scared me to death when it decided to climb on the lens. 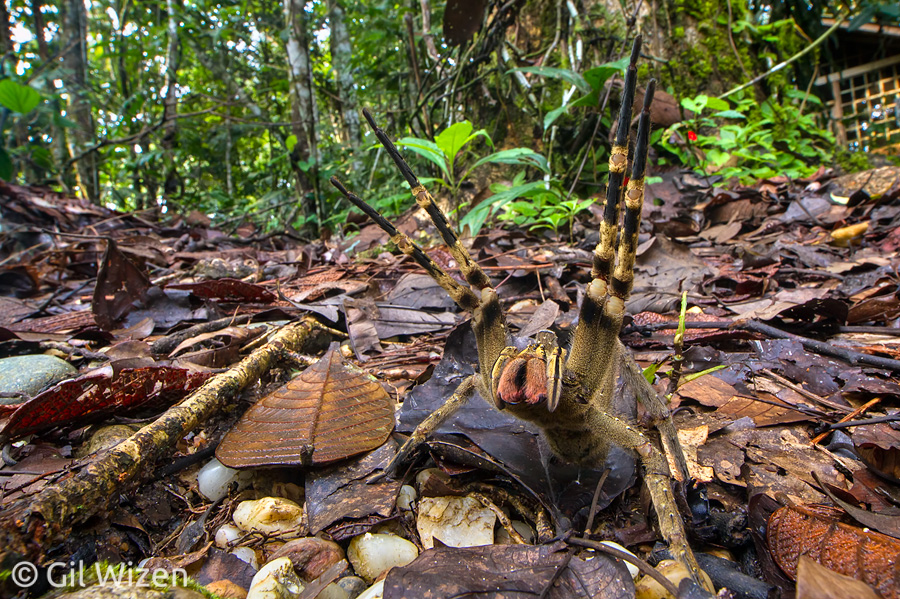 Phoneutria fera warns me to back off, and for a very good reason. This spider possess a highly potent venom and typically displays a defensive behavior prior to biting.

By the way, spiders are not monsters and I am not afraid of them. But whenever I stumble upon a large invertebrate there is always a split second of sudden surprise and amazement. I guess it is one of those overwhelming nature-related stimuli that I mentioned above.

6 thoughts on “A monster under my bed”