It comes as no surprise that the first two “Little Transformers” presented on this blog were beetles. Many beetles are capable of folding, taking the shape of different structures, whether it is for camouflage or as a means of defense against predators. I will surely present more examples of transforming beetles in future posts. However, there are other insects out there that have the same transformation ability. I had the fortune of meeting one of those insects while staying at a jungle lodge in Honduras. My visit was in the middle of a dry spell and insects were surprisingly scarce. Many of the hikes I took in the rainforest were unfruitful. In my frustration I decided to check the screen windows outside a nearby facility because sometimes insects decide to rest on the mesh. I did spot a few nice finds, and then, I saw this. 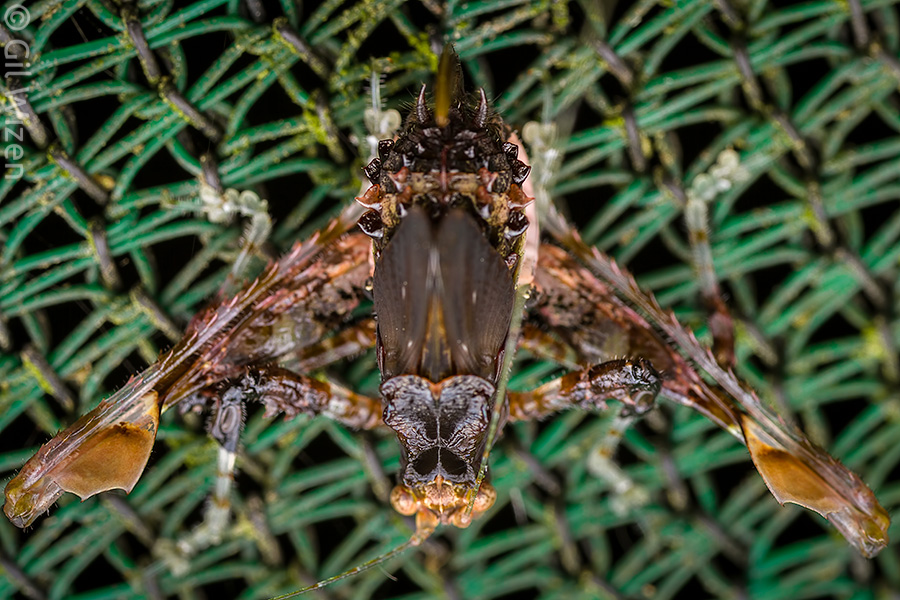 My first thought was ‘that is one weird-looking moth’.
Let me explain.
My entomologist mind is on a constant search to find familiar patterns in objects that I see, because in the tropics deception is lurking everywhere. What I saw first was the animal’s shape and took it immediately for a winged insect. Then the coloration and the pose reminded me of some Erebidae moths (for example, genus Eutelia).
It took me a couple of short attempts to refocus my eyes on what is important before I could see that this is not a moth at all. 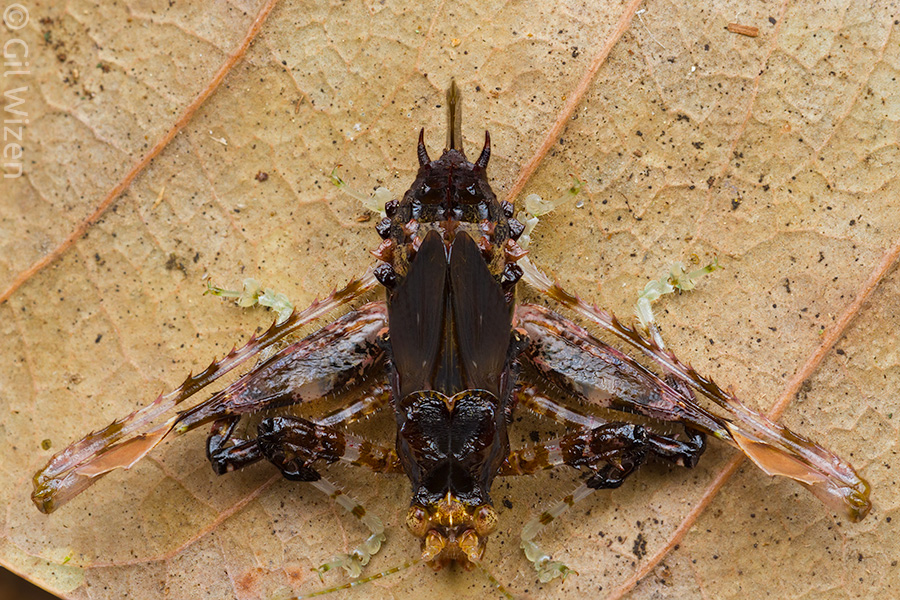 Now that the insect is off the net, we can take a better look. Dorsal view.

Another view of this amazing insect

This is in fact a katydid nymph, Pycnopalpa bicordata, and it is so good at what it does that I was not able to locate it much later as it was sitting among fallen leaves in the vial I put it into. Whenever it is inactive it will assume this position, blending in with tree bark or leaf litter in the forest understory. Whether it resembles a moth or not is a matter of personal opinion at this point, because unless there is concrete evidence for an unpalatable moth model that this katydid is mimicking, the body posture this katydid takes can be within a different context altogether, such as a shredded fallen leaf or something similar. 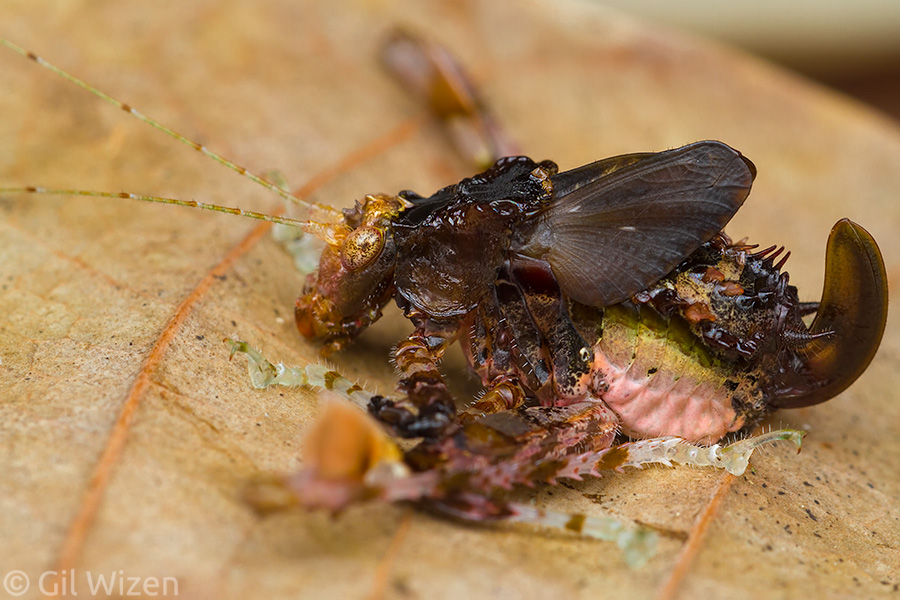 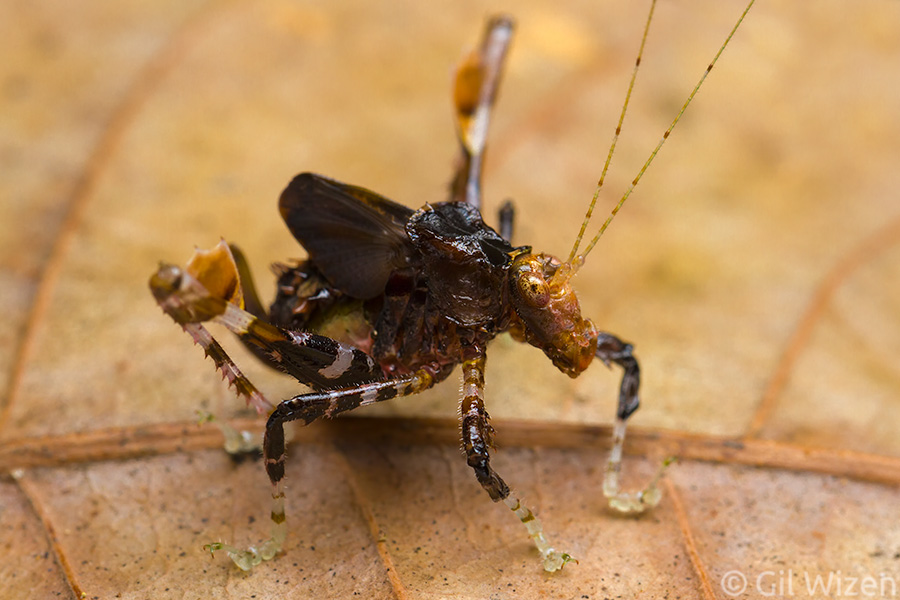 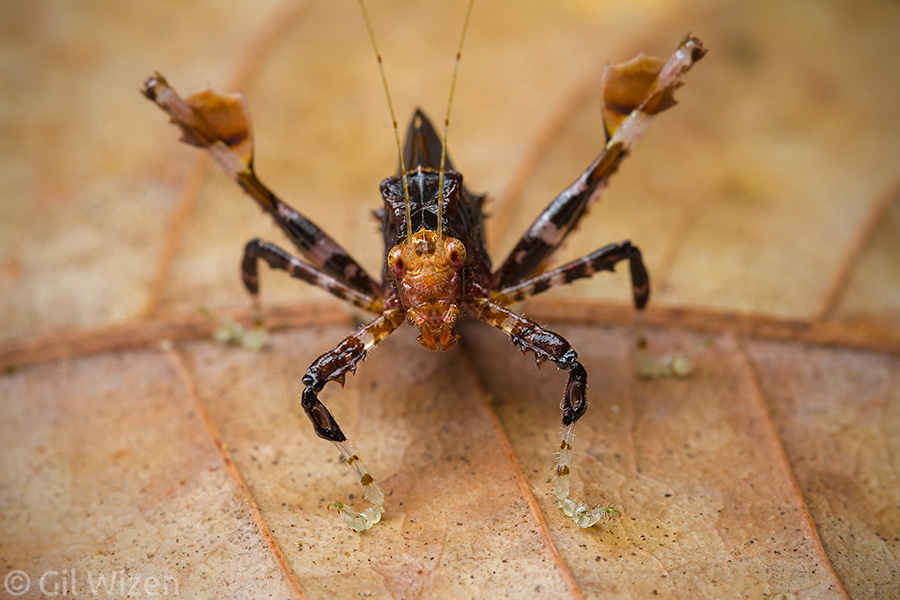 As mentioned above, this is a nymph. A juvenile female to be more accurate, as can be seen by her sickle-shaped ovipositor. So what does the adult katydid look like? I was expecting some mind-blowing leaf appearance; maybe with flattened fins and spines on the legs, to mimic a dried leaf chewed up to its veins. You can safely say that I was exaggerating, and in the end when the nymph molted to its adult stage I was rather disappointed. 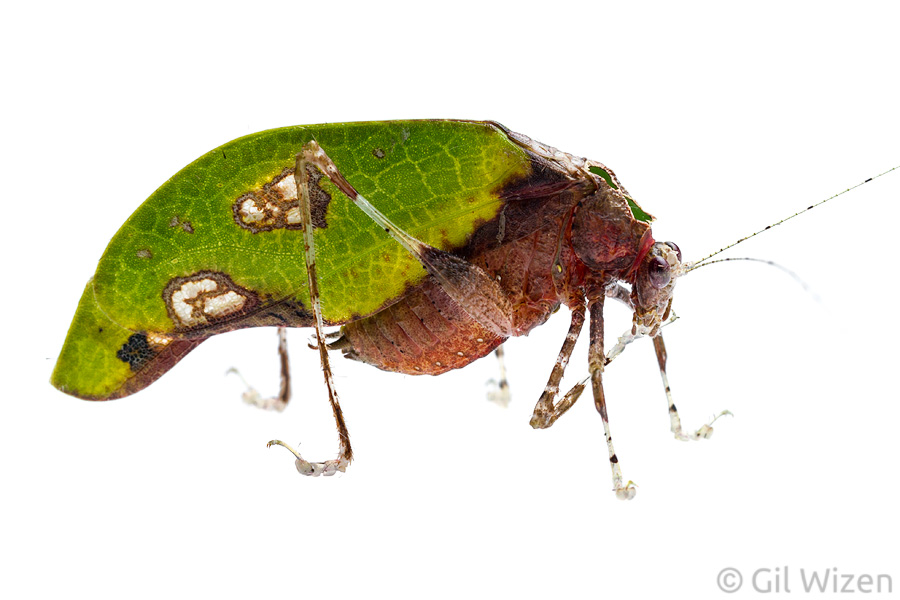 The adult Pycnopalpa bicordata is a very delicate insect with no major body modifications for mimicry or camouflage. Yes, it still looks very much like a leaf – having vivid green wings with transparent cells surrounded with brown margins, representing consumed parts or sunburn damage to leaf tissue. But the adult stage pales in comparison to the ingenious structural design of the nymph. Still, it is very nice to find Little Transformers outside the realm of Coleoptera. Moreover, among the orthopterans, I can think of at least one additional species of katydid and several grasshoppers that fall under my definition for Little Transformers. Hopefully we will get to learn about them in future posts.