A while back someone asked me if I had any plans to put up a gallery page for blattodeans on this website. That was indeed something I had in mind; This is one of my favorite insect groups, so it would not do them justice if they are unrepresented here. I hate to admit, but my issue with uploading photos of blattodeans is mainly due to difficulties in identifying some of the species I photographed. Nevertheless, I am happy to report that the Blattodea gallery is now up and running.

Blattodeans suffer an extremely undeserved bad reputation. The majority of Blattodea species live in natural habitats such as forests, deserts, sand dunes, and meadows, leading a cryptic lifestyle away from humans. Only a tiny fraction of them, less than 1%, lives in proximity to humans and considered as pests. For this reason I decided to ditch the word “cockroaches” and follow Piotr Naskrecki by adopting the word “blattodeans”. In the sad reality that we live in today, the word “cockroach” often carries a negative connotation in people’s minds. It is associated with something unwanted, menacing, dirty, and harmful. This could not be further from the truth: many blattodean species help to break down decaying organic matter, making crucial nutrients available for other organisms. They are, along with ants and flies, nature’s cleaning service (you’re welcome). Some species are also important pollinators. And that is without even mentioning their numerous adaptations to avoid predators, their maternal care, and social behavior.

A forest blattodean nymph (Nyctibora sp.) with white “socks.” If you don’t think he’s cute you might want to check your pulse.

A long time ago I had the idea of photographing blattodeans right after molting, while they are still fresh and pigment-free. My goal was to see whether people would recognize the animal presented to them, now that it lacks some of its identifiable characters. By the way, I have been doing the same thing with whip spiders.

Blattodean molting. Who knows what it is going to look like once pigmentation appears?

The semi-transparent exoskeleton of a freshly molted Lanxoblatta rudis nymph allows a rare glimpse into the insect’s internal network.

The first attempts were done with Periplaneta americana, a common species that most people associate with pests. When presented with an all-white Periplaneta, almost everyone said it looked “cute”. 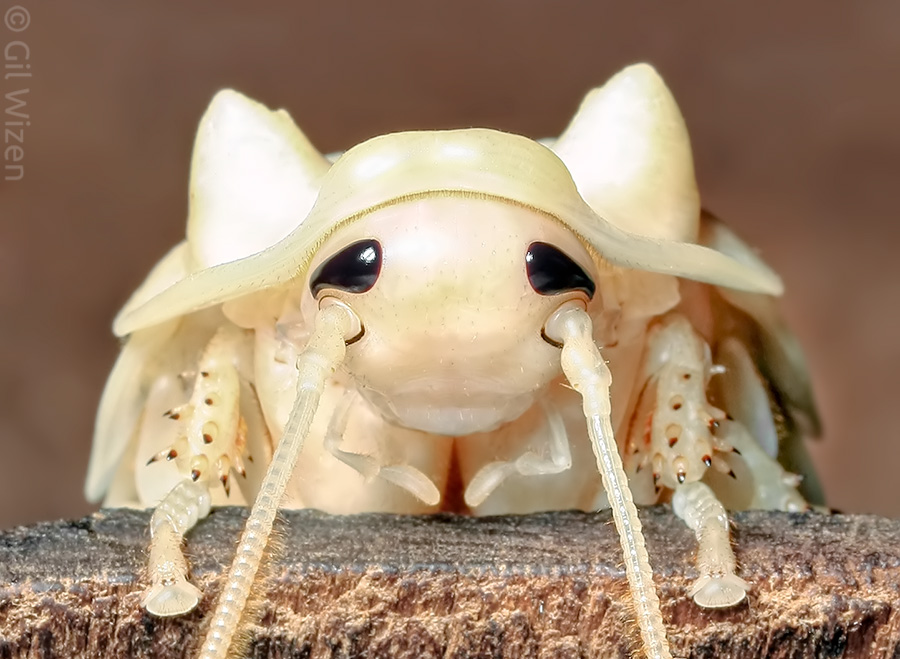 Above is a freshly molted male Madagascar hisser (Gromphadorhina portentosa) from a colony we kept at the museum I worked at (for more details see my previous post). We used to isolate individuals that showed signs of an approaching molt, to use them in class displays for students. Large males like this one were always a special treat, with their impressive horns. I took this photo in 2006. Even though I have seen and photographed many freshly molted blattodeans, I still see this old photo as one of my best captures. There is something about it that speaks to people. They no longer recognize an insect they are repulsed by; instead many people see something that reminds them of a cat. Recently I was delighted to learn that this photo has provided inspiration for an artist: I stumble upon an article in Chinese encouraging people to learn more about blattodeans. It featured my photo (=copyright infringement), followed by a drawing of an innocent-looking girl wearing the male horned hisser as a hat. Cute girls with cat ears (referred to as nekomimi, or in the case of other animals’ ears – kemonomimi) is a popular theme especially in manga and anime in Japan, and the blattodean serves a similar purpose here. As a matter of fact, early on I gave my photo the title 猫ちゃん (neko-chan), which translates to “kitty” in Japanese.

Blattodean kemonomimi embeded from the article mentioned. Artwork by user 长得像人的割草机 on Weibo (see originals in the comment below)

Generally speaking, I find that a lot of people respond differently to white blattodeans compared to dark-colored ones. It is almost as if it is a completely different animal. What is it that makes us so susceptible to visual cues in the form of flat dark insects? There must be a reason for this sensitivity.

Some blattodeans are white by nature, like this beautiful species of Panchlora from Belize

We used to joke at the museum that when it comes to human reaction, insects can be divided into two subgroups. The first subgroup contains “green” insects: these are insects that are perceived as friendly just by their appearance. They do not necessarily have to be green, but it helps if they are. This group contains ladybugs, grasshoppers, stick and leaf insects, smooth caterpillars, stout and furry moths, mantids, and katydids to some extent. The other subgroup contains all the other insects. Again, this division is merely a joke, but it is amazing to see just how many people follow this arbitrary division. To those who welcome ladybugs but put blattodeans in the “other” subgroup, I always remind that there are blattodeans out there that look exactly like ladybugs.

Male horned roach (Hormetica strumosa). Not as cuddly as the white “neko-chan”, but pretty close.

Since photographing “neko-chan”, I have been working with other species of blattodeans, hoping to achieve the same result, however, I was not able to replicate that look. Maybe it was more than just timing the photo with the molting process. Maybe I also captured some of the hisser’s essence and unique personality. After all, he almost looks like he is trying to tell us something. Well, he does, all blattodeans do – but we never stop to listen.

10 thoughts on “A Moment of Creativity: Reconsidering blattodeans”