If you read my previous post about blattodeans you might have noticed that I left something out. The post does not make a single mention of termites that belong in the same insect order. Yet my Blattodea gallery contains photos of some termite species. What is going on?

Make no mistake – termites are indeed included in order Blattodea. While they do not lay their eggs in cases (oothecae), they share many other attributes with roaches. Historically, termites were classified under their own order, Isoptera. This is what I learned at university during my entomology training a decade ago. However, times change, and with it taxonomy is rearranged according to new evidence concerning the relationships between groups. Termites have been found similar in their morphology and social behavior, as well as molecular phylogenetics, to wood-feeding roaches of the genus Cryptocercus, and both are now treated as sister groups under the infraorder Isoptera within the Blattodea. I will only say that although I welcome this update in termites’ taxonomical position, I found it difficult to get used to at first. Old habits die hard I guess.

Termites are truly unique because they are among the few hemimetabolous insects (lacking the pupal stage in their life cycle) to develop an eusocial lifestyle, with different reproductive castes, division of labor, and overlapping generations. In stark contrast to eusocial Hymenoptera (ants, bees, and wasps), termite colonies follow a different structure, often with a single long-lived royal pair responsible for egg production (as opposed to male Hymenoptera that die soon after mating), but also include a secondary reproductive caste. Workers and soldiers can be both males and females (in Hymenoptera – all females). From an ecosystem standpoint, termites play a vital role as detrivores, feeding on and breaking down dead plant tissue and wood. For this reason they rely on gut symbionts (protozoans, bacteria, and flagellates) that assist in breaking down cellulose.

One of the things you often learn about termites in an entomology course is that there are two types, easily distinguished by their soldiers: species with mandibulate soldiers (possessing jaws), and species with nasute soldiers (with a long nose). The mandibulate soldiers use their enlarged strong mandibles to physically attack and injure intruders. They cannot use their jaws for feeding, and are therefore dependent on mouth-to-mouth feeding from the workers. In contrast, the nasutes deploy chemical defense by secreting various compounds from their nose, mainly to use as deterrents against ants, but also with some effect over much larger predators such as tamanduas.

Why this long introduction? As things usually go in nature, and more specifically in arthropods, to every rule there is an exception. Last year I travelled to Costa Rica, and one of the species I was hoping to find was a very unique termite.

This monstrous beast is a soldier of Rhynchotermes perarmatus, a nasutiform termite. However, contrary to the “rule” I mentioned above, soldiers of this species possess both a chemically armed snout and well developed mandibles. They are now treated by taxonomists as being mandibulate nasute.

The neotropical genus Rhynchotermes contains several species, all have nasute soldiers with noticeable mandibles. However, only in two species the mandibles are massive – Rhynchotermes perarmatus and R. bulbinasus.

Rhynchotermes perarmatus is subterranean, nesting underground or under stones. These termites usually do not expose themselves to the outside world, but instead move inside covered tunnels constructed from soil particles. Inside these dark tunnels the stout workers run clumsily, carrying debris and compressed wood fiber back to the colony for food. 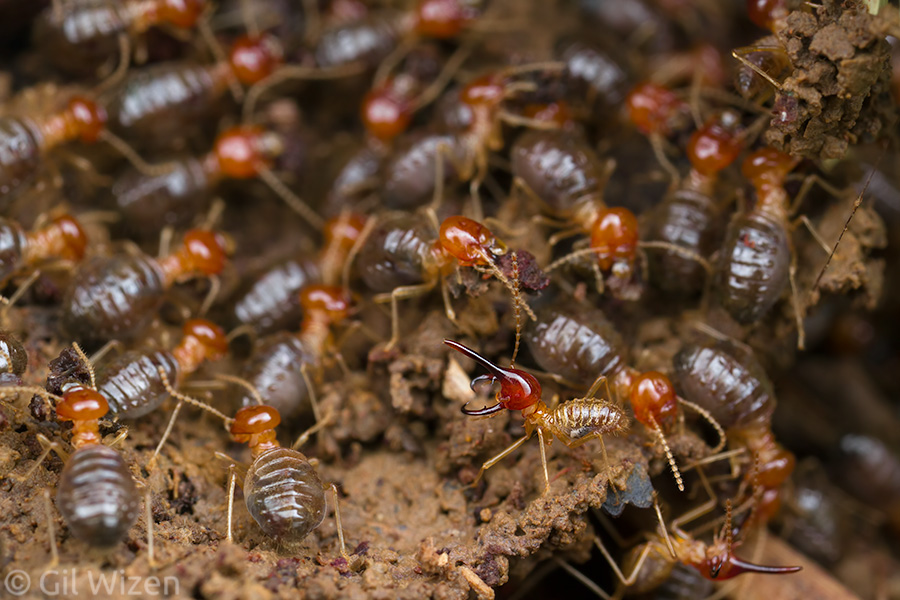 An active tunnel contains a thick flow of worker termites, and several soldiers scattered at the periphery, on guard.

Rhynchotermes seems to be associated with slightly disturbed habitats, such as cleared forest areas or meadows used for cattle grazing. There are reposts of them active under aged dried out cattle dung, suggesting they may have a role in breaking it down and recycling the nutrients. In Costa Rica I found Rhynchotermes perarmatus under a heavily decomposed fallen tree, right besides a well-maintained trail. Still, after flipping the log I could not see them. I had to break open one of the galleries to get access to the action.
And the soldiers did not like that. 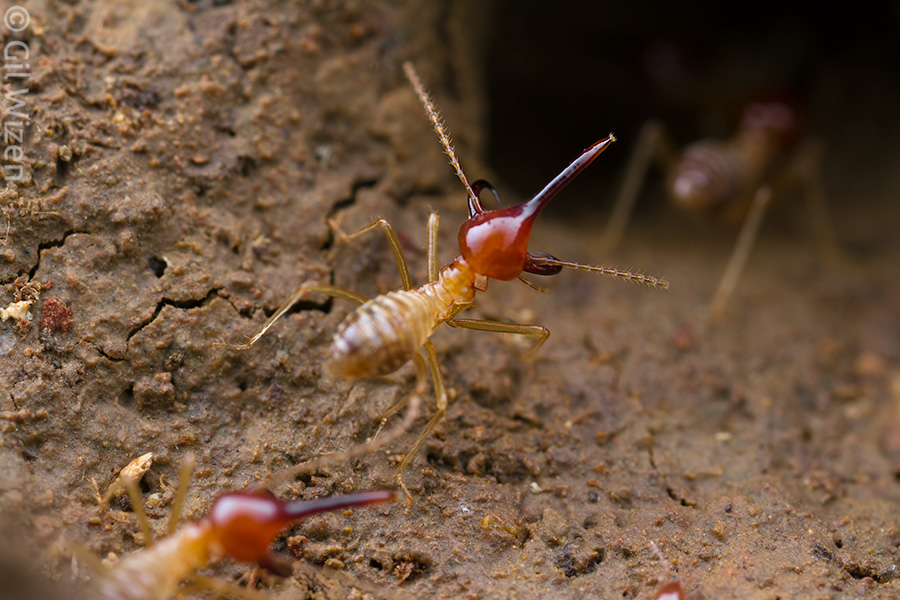 While the workers kept on running seemingly undisturbed, the armed soldiers started pouring out, seeking the intruder. Maybe this is the time to mention that termite soldiers are usually blind. They have no functional eyes, and rely on chemical cues and physical proximity for defending the colony. 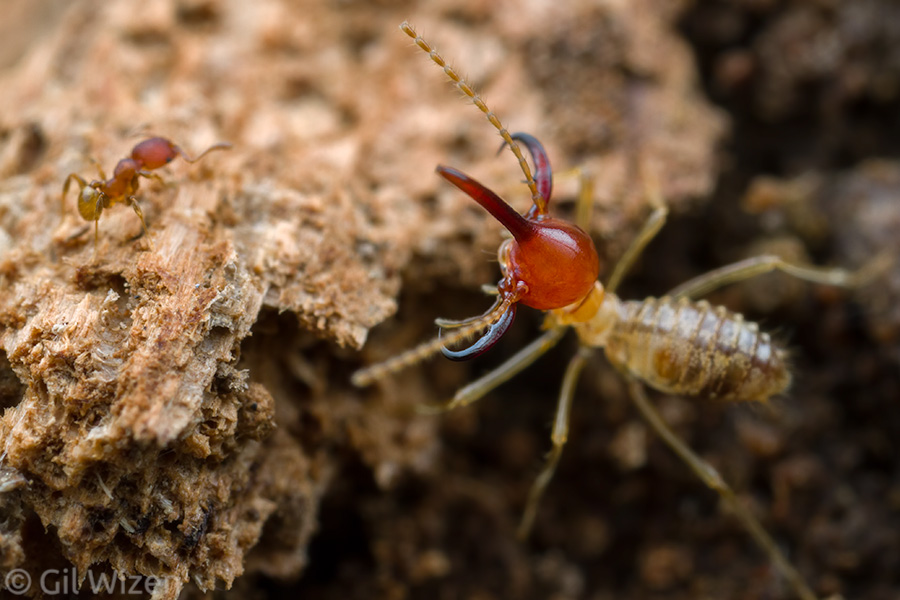 Even tough beetles like this weevil know to steer clear of active Rhynchotermes perarmatus soldiers.

To the human eye it seems like despite their menacing appearance, Rhynchotermes perarmatus soldiers do not do much. They walk around aimlessly, then suddenly rise on their feet and give a mute roar, gaping their mandibles. But what seems harmless to us is actually a well thought of strategy: the soldier’s head contains a special gland that secretes a cocktail of sticky odorous compounds from an opening located in the snout. It is easy to think of nasute soldiers as nozzle heads discharging glue, but in reality what Rhynchotermes discharge is a strand, not fluid. The idea behind this is to turn your enemy into a sticky mess and incapacitate it. This is effective in case of attacking ants, perhaps termites’ worst enemies. The chemical properties of the compounds may also have a role in disrupting the ants’ chemical communication. Sometimes during the interaction the termite soldiers stick to the ants as well, sacrificing themselves for the benefit of the colony. But what if this does not work? Then they can use their secondary weapon – the mandibles.

The mandibles are curved (similar to those found in army ant soldiers) and double-hooked. I cannot help seeing them as reminiscent to the mandibles of young Epomis larvae. This is probably an adaptation to grab and hold on tight to whatever the termite is biting. I even tested it – not only the soldiers grab well, they also lock themselves in place. They are difficult to pull out, like a fishhook.

Let me tell you, these tiny soldiers can sure bite!

Another thing I noticed is that many soldiers had “broken noses”. I wonder if the snout has a breaking point to allow for a quick release of the gland’s contents onto the intruder. They too moved about clumsily looking for troublemakers to the colony, reminding me of a drunken guy trying pick a fight in a bar, broken bottle in hand.

Poor soldier got its nose broken 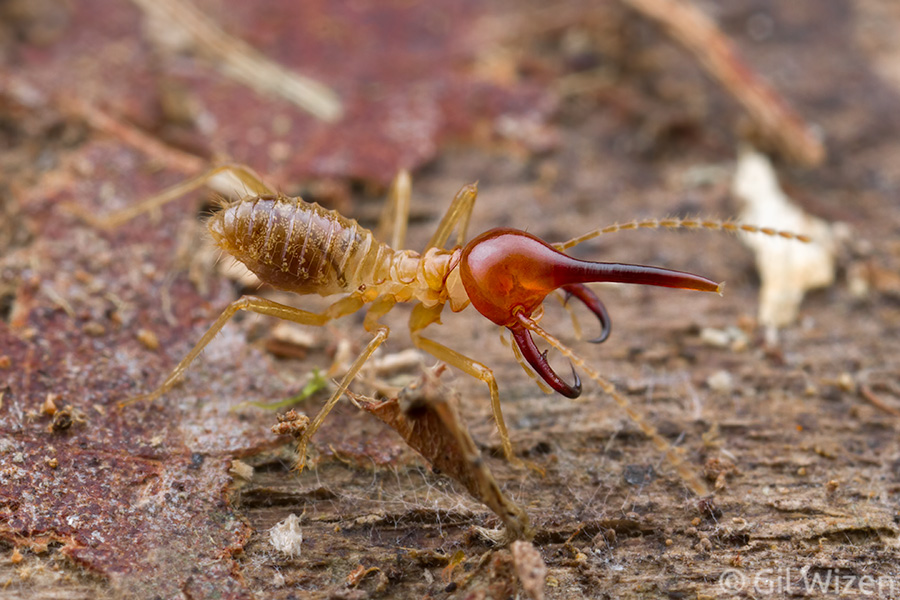 There is still much we do not know about Rhynchotermes. For example, in the case of Rhynchotermes perarmatus, the alate caste was described only recently. Some Rhynchotermes species tend to occupy abandoned nests of other termites, but occasionally they are also found in close proximity to active nests, bordering the neighbouring colony or right on top of it. It would be interesting to examine what kind of interaction they have with other termite species. Like a lot of things in nature, these termites do not conform to our neat labels. Their bizarre soldiers represent the best of both worlds. They serve as a reminder that nature is full of surprises, that rules are meant to be broken, and that you do not have to look hard to find something new and inspiring.

6 thoughts on “Rhynchotermes – the best of both worlds”