I don’t dance.
It has cost me much time and good friendships trying to explain why, so I will not go into details here about it. Let’s just say that I tried many times, and it always felt too unnatural to me. However, not so long ago it occurred to me that there are a few creatures in this world that can make me dance. These creatures are not human. I had the pleasure of meeting one of them in my last visit to Ecuador. It was a hot, humid afternoon, and I was busy photographing a cooperative jumping spider for Meet Your Neighbours project. Suddenly out of nowhere, I saw something that looked like a biplane passing above my head. At first I ignored it, thinking maybe the intense heat took its toll and I was hallucinating, nevertheless that thing passed again, this time drawing the curious attention of my eight-legged subject. I looked up and saw nothing at first. Then I saw the strangest mosquito hovering right in front of my nose.

I recognized it immediately as a member of the genus Sabethes. There is no other mosquito in the world that has such an elegant appearance: its body is quite large for a mosquito, covered with blue and green iridescent scales. The legs are exceptionally long, each bearing a wide flattened brush of hairs, like a paddle. During flight the legs are extended forward and backwards, partially curved, giving the hovering mosquito a unique “aircraft” appearance. Members of the genus are found only in northern Latin America, and the females are important vectors of several tropical diseases, such as yellow fever and dangue fever. The function of the paddles found on the legs of males and females is poorly understood. A scientific study showed that males court and mate normally even when the paddles are removed, whereas paddle-less females are rarely approached by males. It is widely accepted among evolutionary scientists that elaborate ornaments on females take part in reversal of the sex roles, where females compete among themselves for the attention of and mating with the males. This may be a possible explanation for the extensive ornamentation on Sabethes females. Like many tropical mosquito species, Sabethes reproduce in small tree holes or bromeliads, where accumulating rainwater serves as medium for their aquatic larvae. 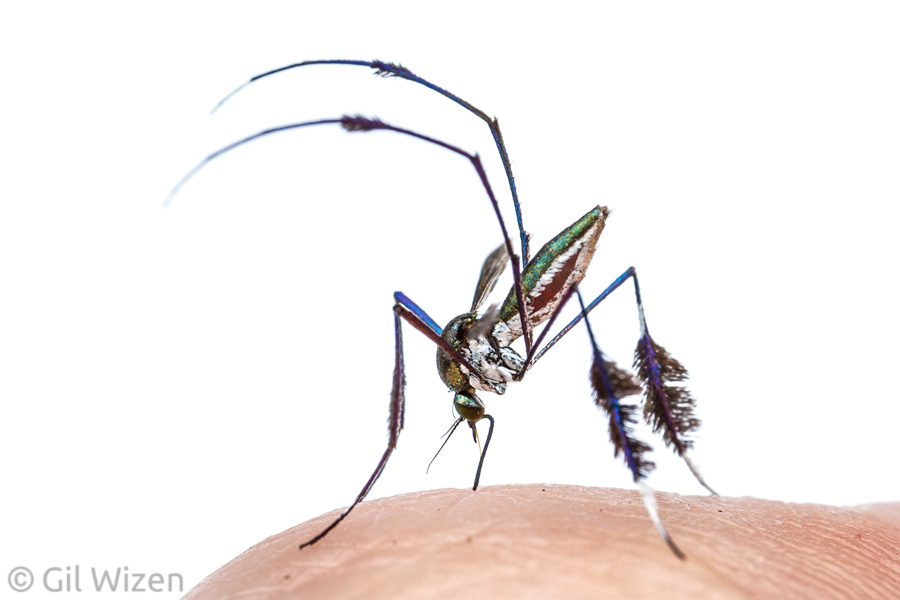 Sabethes sp., female with intense ornamentation on the legs

I had to be quick. These mosquitoes are not very common and I knew years could pass before I encounter them again. Upon careful inspection, I realized there were two Sabethes mosquitoes flying in my wooden cabin. The big one, with impressive ornamentation on the legs, earned the name ‘mothership’, while I named the smaller female ‘maid’, for lacking brushes on the forelimbs. I started following the mosquitoes in the room, counting steps as I was walking towards them, like a slow dance. Or maybe it was vice versa, and the hovering blood-sucking females were actually following my every move? It was so hot that I did not give it much thought. It is funny to think of Sabethes as a mosquito you want to get bitten by, just to get a closer look at this wonder of nature. At some point I was so frustrated with my attempts to approach the mosquitoes, that I shouted: “Come here and take my blood!”

I hate to admit, but the bite of Sabethes sp. is rather painful.

In general, mosquitoes are attracted to dark objects, but they also respond to chemical compounds found in human sweat. I was sweating like crazy because of the heat and the constant movement. This was my own version of the film “Dirty Dancing”. Sad to admit it, but many times, the females were more interested in the big black object in front of them and landed on my camera. Then we had to start our dance all over.
After some time the ‘maid’ lost interest and escaped through the chicken mesh stretched over the window. And so I was left with the ‘mothership’, dancing slowly around the shaded cabin. Me, moving about in small steps, arms extended forward, hoping for some contact, and her, elegantly following my every move, but avoiding me altogether. It was quite enchanting. From time to time, she embraced my hand and gave me a tiny kiss. And like an obsessed stalker, I relentlessly tried to document it. Some take me for a non-romantic person. I can definitely see why.

But then an idea came to my mind – what if I can make the mosquito come to me for a photograph, against my preferred background? And would it be possible to take a MYN photo of this skittish insect? This took some careful planning, and after hours of failed attempts I finally came up with a working method for it.

Sabethes sp. I never grew tired of looking at this beauty.

The ‘mothership’ remained patient enough to allow me to photograph quite a few interesting shots before leaving me all alone in the jungle’s darkness. However, this experience will surely remain a good memory for years to come, perhaps my most captivating dancing partner – the world’s most beautiful mosquito.