In this post I will discuss common misconceptions about wide-angle macrophotography. These are all things that I heard from people discussing this photography style. Please note that the opinions expressed here are my own only, and are not to be perceived as rules of any sort.

Taking it all in – A very popular view of wide-angle macro is that you have to include ALL the habitat in the background. Not just the subject and its perching spot, but also the ground, trees and even rivers, snow-capped mountains, and I dare say the sun or moon! In most cases this is unnecessary. It is true that wide-angle lenses have the capability of including much in the frame, but there are many creative ways to use them. The main element in the photo is the subject; the background is there just to provide a context for it. A wide-angle macro shot can be perfect even without the horizon line or the sky.

Schneider’s skink (Eumeces schneideri) from Israel. I wanted to capture the “feel” of the windy meadow it was living in. Canon 7D, Canon 14mm. 1/125 at f/14, ISO100. Fill twin-flash with DIY diffusers.

Bigger is better – There seems to be an unofficial race among wide-angle macrophotographers to get the highest magnification from their gear. This is understandable: the bigger a small subject is in the photo, the more impressive the final result. However, this does not necessarily mean that the subject must be photographed at the closest focusing distance. There is a place for photographs showing subjects from afar, how they blend-in in their surroundings, or go about their daily life. I am aware that this may be considered leaving the macro realm and stepping into regular wide-angle photography. In my opinion it is a blurry borderline, and if the subject is small-sized, it is still considered macrophotography.

I could have gone much closer while photographing this leaf-mimicking katydid (Cycloptera sp.) in Ecuador, but I wanted to show how it blends in perfectly with the bush it was resting on. Canon 7D, Canon 14mm. 1 sec at f/18, ISO400. Fill twin-flash with DIY diffusers.

Super sharpness – Everything, from subject to background, must be in focus and super sharp. While depth of field is certainly important in wide-angle macrophotography, I will argue that in most cases a sharp background can draw the viewer’s attention away from the subject. Our eyes tend to fix on whatever is sharp. Nicky Bay did an excellent experiment demonstrating just that: when he stacked two photos to create a super sharp image of a frog in the rainforest, it became harder to keep the eyes fixed on the amphibian. Unless your intention is to show camouflage, I recommend leaving the background slightly out of focus. And if your subject is a slender insect such as a mantis or a stick insect, consider opening the aperture even more to get a shallower depth of field.

This green lynx spider (Peucetia viridans) would have been lost in the busy background if it had been any sharper. Canon 7D, Sigma 10mm fisheye, x1.4 teleconverter, 6.3mm custom-made extension tube. 2.5 sec at f/22, ISO800. Fill twin-flash with DIY diffusers.

Barrel distortion is bad – Wide-angle lenses are especially prone to barrel distortion. This changes perspective and proportions of objects in the photo, causing whatever is in the center of the frame to appear larger, and straight lines (for example trees, horizon) to appear curved. Many photographers are in a constant battle against barrel distortion, trying to find the best way to eliminate it in post-processing. I somewhat agree; a curved horizon can really be distracting (unless you go for a fisheye effect). But in times when I do not have a clear horizon in the frame (a dense forest is a good example), I find that the distortion can be “forgiven”. In other cases, I find that it actually draws more attention to the subject, if its body proportions are exaggerated. Sometimes the “fisheye look” can directly translate to a “bug-eye look”, even though it may not truthfully represent what insects see. If humans were the size of an insect, maybe this is how we would see the world. Because wide-angle macro attempts to shrink the viewers and make them a part of the scene, barrel distortion is not necessarily a bad thing.

When barrel distortion can be excused: Chicken of the Woods mushroom (Laetiporus sulphureus) is the center of attention in this photo. The curved trees in the background are not distracting. Canon 7D, Canon 14mm. 1/15 at f/16, ISO1600. Fill twin-flash with DIY diffusers.

Night wide-angle macro is impossible – This is hardly the case. It depends on what you want to capture. The lack of ambient light does make it hard to include much of the habitat in the photo, therefore you must plan the shot before taking it. A tripod and remote shutter release are a must. While I personally do not have much experience in doing so, night wide-angle macro is definitely possible with light painting and clever composition. Some of my favorite night wide-angle macro shots come from Javier Aznar (who won in competitions several times for his inspiring photography) and Nicky Bay. 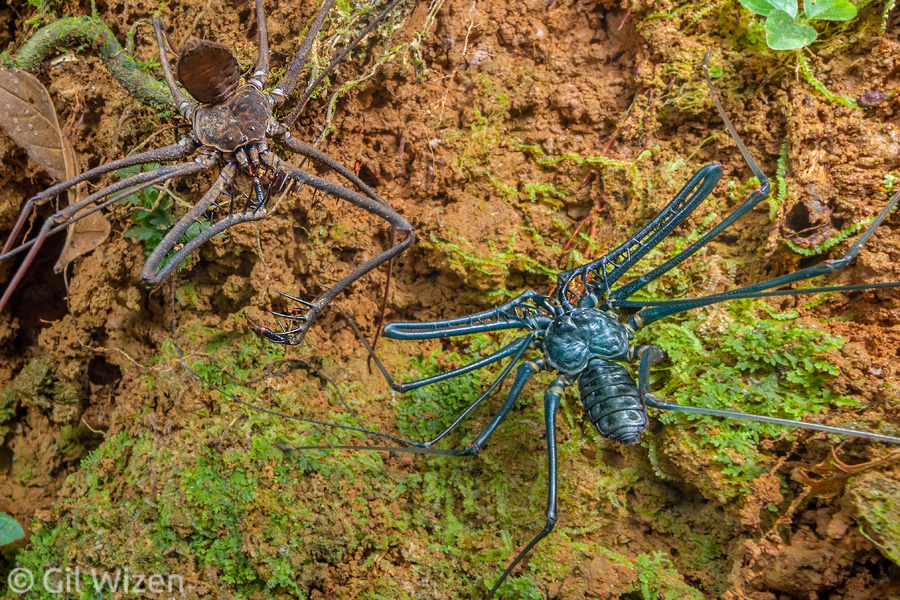 All wide-angle macro photos look the same – of course not, as can be seen just by browsing along this blog post. Every photographer has their own style. In fact, I see much more conformity in landscape photography. If you feel that all your photographs end up looking the same, maybe it is time to try doing something a little different. For example, I had a small wide-angle lens lying around for years, no matter how I used it I could not get the image I wanted from it. Last week I decided to couple it with a new lens and was amazed by the results. Now, some photographers will insist that “you never go full fisheye”, but I disagree. If anything, stepping out of your comfort zone and trying something new is very healthy for your point of view and inspiration as a photographer.

Photo must be “perfect” – Wouldn’t we all like everything to be the way we envisioned it? Unfortunately, in photography things do not always go as planned. In wide-angle macro it is all too common, there is just too much that can go wrong. Keep photographing. Among those so-called crappy photos one might actually stand out as unique. In fact, very often not-so-perfect photos are much more interesting than “Photoshop-perfect” ones. No one wrote any rules for wide-angle macrophotography, and if there are rules, they can be bent from time to time. The only limitation is your own creativity.

Including the human element in the photo can help in telling a compelling story. In this case, we searched for ornate predatory katydids (Saga ornata) for hours, and in the end they turned out to be right under our nose. Canon 7D, Sigma 10mm fisheye, x1.4 teleconverter. 1/40 at f/20, ISO100.

So what happens when things do go wrong? In the next post I will go over some of the major problems that arise when photographing wide-angle macro and using different lens systems.

One thought on “My take on wide-angle macro – part 2”