Last week I gave a seminar in front of med students and doctors at Toronto’s University Health Network about medically significant arthropods. Because I am not a doctor I chose to focus more on the animals themselves, presenting their side of the story and what type of situations bring them to sting or bite humans. The talk went well, I was even able to share my first hand experience with botflies, which triggered some interesting questions from the students. After the talk, one of them approached and asked me – “So, what was your worst bug bite or sting?”
I replied that my body has a severe response to black flies and their bites, swelling like crazy that I can barely recognize myself in the mirror the day after. He seemed satisfied with my reply, however on my way back home it occurred to me that this was not the answer to his question. He did not ask me which bite or sting I disliked the most. He asked me of all the bites and stings that I’ve gotten so far, which one was the worst.
And that is a valid question. I have a history of getting injured while doing all sorts of stuff, and this includes an impressive list of arthropod bites and stings accumulated over the years. But there is one bite that holds the title “the worst”. One bite I will never forget.

Some background: Back in 2007 I took a trip to Ecuador with my colleague and mentor, Alex Shlagman. We worked together at Tel Aviv University’s Natural History Collections (now known as The Steinhardt Museum of Natural History), breeding local and exotic species of arthropods for research, teaching, and display purposes. As the manager of the live arthropods collection, Alex was, and still is, the best arthropods keeper in Israel. On the other hand, I had an extensive travel history under my belt, after crossing South and Central America a few years before. This experience gave me useful insights when tackling the husbandry needs of tropical insects we kept. Nevertheless, it bothered me that Alex, with his vast knowledge of those insects, has never experienced the rainforest and its staggering diversity in person. So I did something crazy and I decided to take him to Ecuador.

One of the places we visited was a biological station close to the Amazon region. Despite the heavy rainfall this area usually gets, it was extremely dry during our visit, which made it difficult to locate animals active during the day – it was just too hot. One afternoon we hung out close to the station’s access road, following leaf-cutter ants and other insects, and taking photos. While tracking leafhoppers I stumbled upon a bush covered with what seemed to be communal assassin bugs. They were quite unique in their appearance, with a shiny lime-green abdomen and black head and limbs. From a distance they looked like spiders.

I took a single photo and then I moved in to do something I knew I shouldn’t – I poked the bug with my finger to force it into a better “pose”.
And it got into a better pose alright, immediately grabbing my finger and punching a hole in it using its thick proboscis. The pain was so sharp that I remember falling backwards and landing hard on my buttocks, while the bug let go and escaped. I sat there, silent, holding my hand with a bitter expression on my face.

Maybe I should elaborate at this point. Assassin bugs are venomous animals. Their venom is rather complex and contains many compounds, some of which has neurotoxic properties that can lead to a systemic response (and so potentially may cause death). Some assassin bugs have venom so powerful that it is often compared to a cobra snake’s venom in its potency, easily causing paralysis in mammals much larger than the small bug. Holotrichius inessi, an assassin bug roaming the deserts of Africa and the Middle East is even known to hunt scorpions, which are feisty venomous animals themselves. That is an extreme example. The truth is, in most cases we do not know enough about assassin bugs and their venom potency. So when bitten, you just don’t know what to expect.

As I sat there trying to gather my thoughts about what has just happened, I felt numbed by the pain. You know how sometimes when something aches so badly you can feel it pulsating? I did not even feel that. I could not feel anything but pain. I thought to myself, this is it. This is how I go. Alex later told me it was the first time he ever saw me looking confused, like I was watching my life flashing before my eyes. To some extent it really felt this way. I could not speak and I did not want to move (from fear I would worsen my condition). I just wanted this to end. We were essentially in the middle of nowhere, with no one around, so we just waited it out. I cannot remember how long it took, as I really lost the sense of time, but I remember the pain eventually reducing to a dull itch. This is when we got up and left. The itch and stiffness stayed for a few additional days and then dissipated. 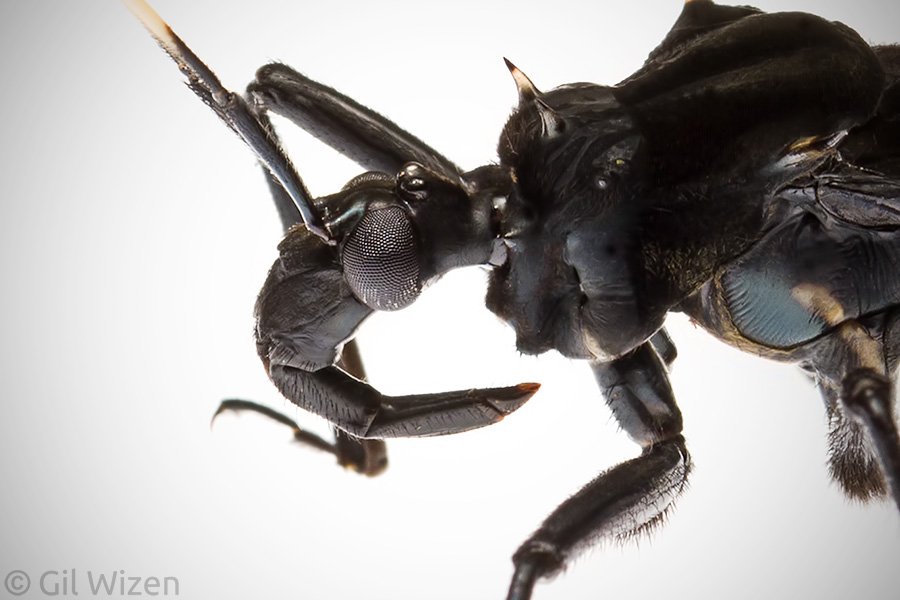 Just imagine this probe drilling into your finger. Not exactly fun, I can tell you.

I always find it a bit funny that my worst bug bite actually is a bug bite. Ever since that trip I have been trying to find that species of assassin bug in my subsequent visits to Ecuador, but I always failed. It is slowly turning into my Moby Dick. The important lesson here is: kids, do not go around poking animals you do not know with bare hands. It has taken me a few more bites and stings until this lesson sank in. Nowadays I am much more careful in the field.
… and I still get bitten and stung.