In 2003 I visited Costa Rica as a part of my first trip to Latin America. One of the hostels I stayed at had a large poster hung featuring many Costa Rican frog species, to show the high amphibian diversity that is found in this beautiful country. This was the first time I saw a photo of a splendid leaf frog, Cruziohyla calcarifer. Back then it was called Agalychnis calcarifer but in 2005, following a revision in the Hylidae family, it was placed within a new genus, Cruziohyla, along with another species. Then in 2018, another revision to the genus was published, splitting Cruziohyla calcarifer into two species. The costa Rican species is now called Sylvia’s tree frog, Cruziohyla sylviae.
When I saw the photo I was stunned. It looked like a massive tree frog, with eye-catching coloration: dark green (dorsal) and bright orange (ventral). The sides of its body are finely striped in black against an orange background. Its eyes, featuring a vertical pupil – an indication this animal has a nocturnal lifestyle, are orange with a grey center. In addition, the foot-webbing is wide and the adhesion discs on the fingers are large and round, giving it a cutesy appearance.
I decided to set out and look for this species in the rainforest during my time in Costa Rica. Of course at that time I knew nothing about these frogs, and as expected I failed miserably in finding them (but I did find many red-eyed tree frogs!)

Fast forward to 2014. Visiting the Amazon rainforest in Ecuador, I was mainly searching for interesting insects and arachnids at night. I was fortunate to have good weather throughout this visit, until it started raining heavily on one of the nights prior to my departure. But this rain was like no other I have seen before – it was so warm that a thick fog formed, covering everything in the forest understory. I was about to declare this night a failure for observing arthropods, but very soon I learned my mistake. Following the creation of this natural sauna, hundreds, no, thousands of animals came out of their hiding spots. The forest was buzzing with orthopteran and amphibian calls, roaming arachnids and crawling velvet worms. It was magnificent, a naturalist’s dream. Among the noisy frog chorus coming from the dense canopy, there was one distinct call, louder than the others, which sounded like a short “moo” (remember those tipping-can cow-sound toys? Something like that.) unlike the typical “cluck” call characterizing tree frog species. It wasn’t long before I located the source, and upon seeing it my heart skipped a beat. Sitting on a leaf before me was one of the other species in the Cruziohyla genus, the fringe tree frog (Cruziohyla craspedopus)!

Fringe tree frog (Cruziohyla craspedopus) in its natural habitat. Photographed in the Amazon rainforest in Ecuador.

This is, in my humble opinion, the most beautiful tree frog in the world. I know that any attempt I make to describe it will not do justice to its astonishing splendor. The general appearance is similar to that of the other Cruziohyla species, but the green dorsum is marbled with small bluish splotches that resemble moss or lichens and blend perfectly with tree leaves in the rainforest. Moreover, the body margins have “fringes” that are exceptionally long on the hind legs. Males sometimes display them to signal other males or females during courtship by extending their legs backwards. 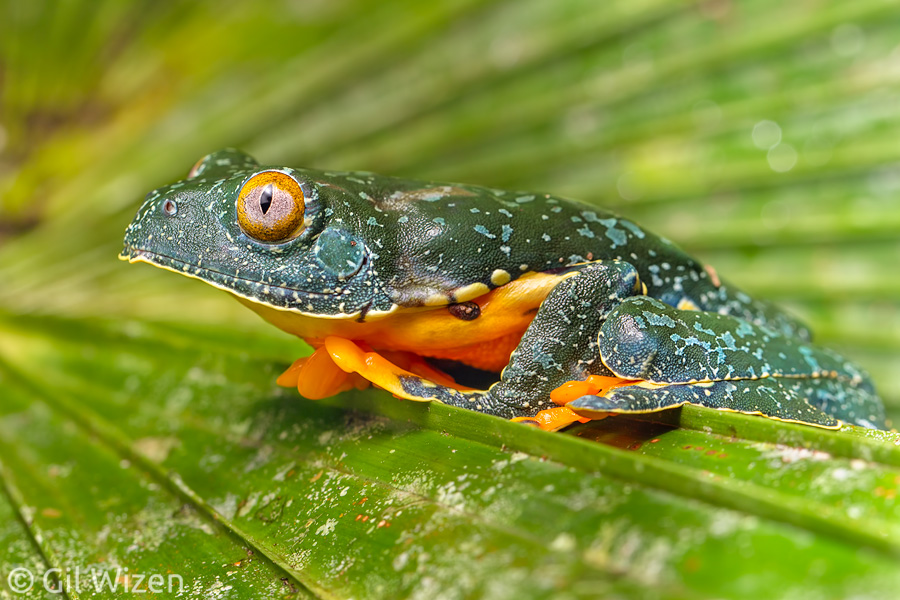 Species of Cruziohyla are characterized by their bicolored iris, which is unique among tree frogs.

At rest, C. craspedopus conceals its bright colors and blends perfectly with its surroundings thanks to color patches that resemble lichen spots on leaves.

A climbing C. craspedopus reveals its aposematic colors that are reminiscent of a tiger: bright orange contrasted with dark stripes. Note the fringes on the hind legs that gave this frog its common name.

Being a high canopy frog, C. craspedopus is cryptic and usually difficult to observe. I have never even dreamed I would have the chance of seeing one, let along in the wild. But spending some time walking in the warm fog I managed to see not one, not two but close to ten individuals. It seems that they like these conditions. After learning their favorite resting spots I could easily find them also by day. Fringe tree frogs descend from the high branches solely for breeding. Pairs in amplexus (typical anuran behavior in which the male grasps the female using his front legs and rides on her back) move about in the canopy until they locate a small body of water with an overhead cover, usually under fallen trees. The females then deposit egg clutches hanging above the water, and the hatching tadpoles drop down and start their aquatic life. Even though I checked under many fallen trees (while searching for Amblypygi) I was unsuccessful in finding egg clutches of this species. Better luck next time.

Finding a fringe tree frog during the day is a mission close to impossible. In addition to their excellent camouflage, the frogs tend to rest on tree leaves high above the ground, making it difficult (and dangerous) to access them.