You can say that I am a little obsessed with Epomis beetles. Can you blame me? They are fascinating creatures. It suddenly dawned on me that since the launch of this blog I have not written a single word about the beetles. Unfortunately, there is a lot of misinformation and inaccuracies on the internet, and even in reputable magazines and books featuring Epomis.

It is one of the weirdest animal stories, one in which a small and seemingly harmless animal prevails against a much bigger animal. A unique case of predator-prey role reversal, where the would-be predator becomes the prey. Amphibians, such as frogs, typically prey on insects including ground beetles and their larvae. Among these beetles, one genus managed to stand out and deliver a proper counterattack to its predators. The Epomis larva has impressive double-hooked mandibles that look like they came right out of a horror movie. It waves them around along with its antennae until the movement attracts a hungry amphibian, which approaches quickly and tries to eat the larva. In a surprising turn of events, the larva is able to dodge the predator’s attack only to leap on the unsuspecting amphibian and sink its jaws into its flesh. It then continues to feed on the amphibian, sucking its body fluids like a leech at the initial stage, and eventually consuming it completely. Sounds like science fiction, I know. But it is real. Furthermore, these larvae feed exclusively on amphibians, and refuse to eat anything else. They are dependent on amphibian prey for completion of their development. This makes the predator-prey role reversal an obligatory one, which is very rare in the natural world.

I first learned about Epomis beetles in 2005, when I was working in the Natural History Collections at Tel Aviv University in Israel. They ended up being a great topic for my M.Sc thesis research, and I continue to study them to this day. The genus contains about 30 species distributed in the old world, with the African continent as the center of diversity. They inhabit the banks of rain-pools and temporary ponds, and synchronize their breeding season with amphibians’ metamorphosis into the terrestrial stage. Most of what we know about Epomis comes from studying three species only (in other words, there is more unknown than known). When the main paper from my thesis was published in late 2011, it became an instant hit in the media (see below). However, one main point of criticism was that the supplementary videos showed the interactions between Epomis and amphibians in a lab setting, which might have triggered an unnatural behavior from both. This is a valid point. We needed a controlled environment to test and prove beyond disbelief several hypotheses regarding the feeding habits of Epomis. Nevertheless, I spent the following years going back and recording the same interactions in the field.

Here is a larva of Epomis circumscriptus displaying luring behavior while waiting for a passing amphibian:

And this is the outcome of the above scenario:

To better understand what is happening during this swift encounter, here is a break down of this interaction to several simple steps. As you can tell by the above video, this sequence takes only a split second in real-time:

From enticement to desperation: European green toad (Bufotes viridis) being lured to hunt and getting attacked by a larva of Epomis dejeani. View large!

The larvae are terribly good at this. Even if they are caught by the amphibian’s tongue, they are still able to quickly use their mandibles to grab the amphibian from the inside, whether it is the throat or stomach, and start feeding.

Hard to believe, but this toad is being eaten.

Sometimes the amphibian accidentally steps on the Epomis larva. In this case, the larva will attach to the leg. First instar larva of Epomis dejeani feeding on a Lemon-yellow tree frog (Hyla savignyi).

While the larvae are specialized amphibian ambushers, the adult Epomis beetles are somewhat more generalist predators. They prey on other arthropods and will sometimes go for the occasional earthworm. But these feeding habits only last until they stumble upon an amphibian again. Then, a hidden memory back from the days they spent as larvae kicks in, and they set out to relive their glory days as amphibian slashers.

Epomis dejeani attacking a European green toad (Bufotes viridis) while holding firmly to avoid falling off. Compare to the photo of the larva attached to the leg above.

In a blink of an eye, the beetle sneaks up on the amphibian and pounces on it, holding firmly to avoid falling off. It then moves to the back, and like scissors uses its mandibles to make a horizontal incision, which disables the hind legs and ultimately prevents the amphibian from escaping. As if this was not gory enough, both adult beetles and larvae are particularly fond of eating the amphibian’s eyes. It is like a sick twist of revenge for the insects: after millions of years of suffering under the constant threat of predation by amphibians, they are able to fight back. Not only they hunt their potential predators and slowly eat them alive, but they also cripple them and peck their eyes out right from the start. 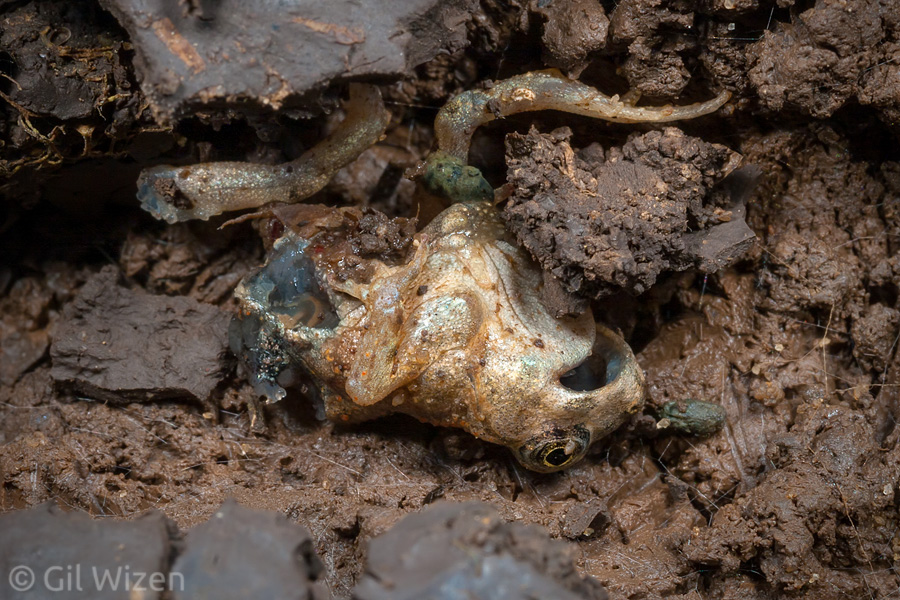 Remains of a partially eaten amphibian in the vicinity of temporary ponds are usually a good sign for adult Epomis activity in the area. Central Coastal Plain, Israel

How did this phenomenon evolve? To be honest, we do not know exactly. But it is possible that somewhere in the evolutionary past, Epomis beetles used counterattack behavior, instead of escaping, as a defense against amphibians. Such behavior could have later evolved into exploiting amphibians as a source of food. The amphibians probably could have not evolved to recognize and avoid this behavior because the majority of insect prey they encounter poses no threat to them, as opposed to the relatively uncommon Epomis beetles. Another interesting point, is that both adults and larvae of Epomis lack any venom, yet the amphibian is quickly subdued and stops resisting after being caught, even while it is slowly being devoured alive.

One common reaction that I get in response to this study is that it was “cruel”, involving poor helpless amphibians that were sacrificed in the name of science. Some people even go further to suggest that I am a sadistic scientist somehow enjoying this. It could not be farther from the truth: This is a natural phenomenon and Epomis beetles must kill and consume amphibians in order to exist. Nature is cruel. We tend to think of amphibians as cute and helpless animals, but from the insects’ perspective they are actually cold-blooded killers (pun intended), gulping every small creature in their path. Moreover, the reality of this study is even harsher: the amphibians would have still died even without me using them as food for Epomis, because the puddles they were found in as tadpoles were quickly drying out. As for myself, I cannot begin to describe the emotional stress I suffered during this research, just so I could bring Epomis’ fascinating biology to the spotlight. I love amphibians, and it was disheartening for me to watch them die so many times. Throughout the study I kept telling myself: “I am going to hell for this, no doubt about it”.

In the past few years I have been following the response to the story of Epomis beetles. More sightings of the beetles are being reported from around the world. There are some excellent blog posts (1,2,3,4, and do not miss Bogleech!), news reports (1,2,3,4,5), videos and TV segments, radio interviews and podcasts, and even Wikipedia pages. Epomis has found its way into artwork. There is a metal band named after the beetles. It is very possible that this is the discovery I will go down in history for, and that is fine by me. Hollywood, I am waiting by the phone for your call. To end this post on a positive note, here is a fitting limerick that I love, written by the talented Celia Warren:

Of the genus Epomis, folk say,
Their larvae at first seem like prey,
But they’ll bite a frog’s throat,
Leave it paralyzed, note!
Then they’ll eat it without more delay.

UPDATE (8 Feb, 2018): I decided to add a gallery page dedicated to Epomis beetles. You can find it here.