It is time to introduce another Little Transformer! I know what you are thinking. Am I ever going to run out material for these blog posts? Maybe. Probably not. As long as there are arthropods around, their life history and morphological diversity guarantees that I will always find examples for interesting deceptions and transformations. Up until now I mostly focused on animals that can change form quickly, assuming the appearance of something else as a defense response against predators and to avoid detection. The case presented in this post is a little different because it does not follow a quick change of form, but rather a slow one, over the course of a life stage. I should be cautious here, because under this definition every insect that goes through complete metamorphosis from larva to adult can be considered a Little Transformer (butterflies, beetles etc’). Even amphibians fall under this loose definition. And to some extent they ARE transformers, because the changes they go through during development are extreme. But this is not the topic for this series of posts. When I talk about a big change happening within a life stage, I mean that the animal starts as one thing, and by the end of the stage its appearance and function has changed into something else completely. And no example is better to show this than the parasitic midges of the genus Forcipomyia.

Biting midge (Forcipomyia sp.) feeding on the hemolymph of a moth caterpillar. Photographed in Belize

Forcipomyia is a large genus in the midge family Ceratopogonidae, with a worldwide distribution and diverse habitat preferences. There are now over 1,000 described species of Forcipomyia. The adults of some species are known as important pollinators of cacao and other plants of economic importance in tropical and subtropical areas. However, many species in the genus are blood-feeders, somewhat characteristic to ceratopogonids as the common name to the family suggests (biting midges). These parasites have interesting relationships with different insect hosts, and they can be found feeding on the hemolymph (insect blood) of grasshoppers, katydids, stick insects, butterflies, true bugs, and even skittish dragonflies. In fact, these interactions are so fascinating and overlooked, that only after spending some time in the field one can notice the midges have a preference for certain host species to feed from.

Sometimes the biting midges sneak into the photo without me noticing. I photographed these mating grasshoppers (Cloephoracris festae), but they have an accompanying Forcipomyia. Can you spot it?

But let’s go back to the transformation they go through, because in one group of species, subgenus Microhelea, it is truly remarkable. The female Forcipomyia midge begins her adult stage with an active lifestyle. She flies about in the forest, feeding on nectar from small flowers. As days go by, she starts craving for blood and search for insects to bite. When she locates her preferred host, using her serrated mouthparts she proceeds to bite it in an area that has soft tissue: antennae, legs joints, wing veins, or between body segments. Once she found the right spot that will fulfill her dietary needs, the female midge attaches to it firmly, and… doesn’t let go, thanks to specialized claws on her feet. She sucks and gulps the insect’s blood, filtering the nutrients and secreting the excess fluids as clear droplets. 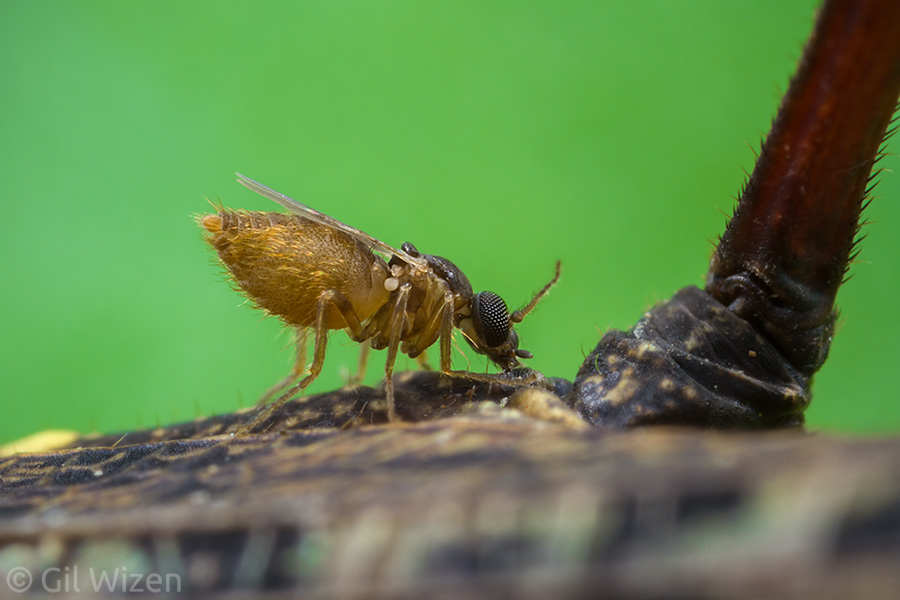 Tick fly (Forcipomyia sp.) feeding on the hemolymph of a walking stick

The midge stays attached like this for quite a while, and soon this sessile lifestyle starts taking its toll on the small parasite. She starts to put on weight. Then, she usually losses her wings – she will not need them anymore because the added mass from the developing eggs prevents her from taking off.

Female Forcipomyia swelling while feeding. She lost her wings but can still use her legs to hold firmly onto the host 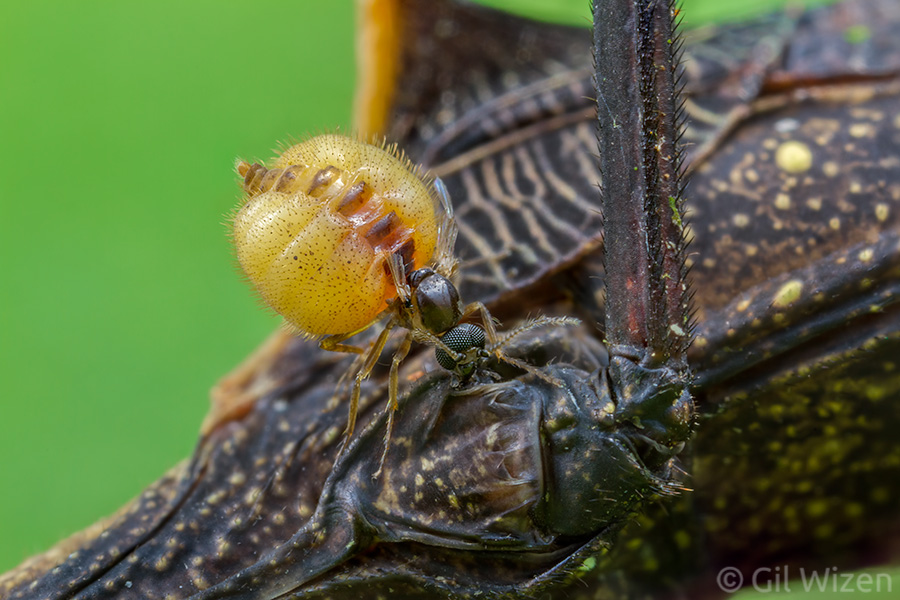 Forcipomyia getting fatter… but not quite there yet

As she continues to swell like a grapefruit, the Forcipomyia midge also losses the ability to use her legs. She does not need to leave anyway, but she is so bloated that she cannot even hold onto the body of the host, and the only thing keeping the two connected are the midge’s mouthparts.

Female tick fly (Forcipomyia sp.) at the final stage of feeding. Her legs released their grip on the host and at this point the midge has fully transformed into a passive parasite that looks like a balloon.

At this point, the engorged biting midge is no different than a tick, and indeed many refer to these parasitic Forcipomyia as tick-flies. Sometimes I like to imagine these fat dipterans disconnecting from their host and floating upwards like a balloon filled with helium, reaching above the forest canopy and flying into space. In reality, the exact opposite happens. The Forcipomyia female eventually leaves the host and drops to the ground, where she lays her eggs and finishes her role. And the male Forcipomyia? They are mostly unknown. Because males are never found feeding on insect hosts, it is safe to assume that they do not feed on blood, and prefer to keep a vegan diet of sweet nectar.

An engorged female tick fly (Forcipomyia sp.) after dropping from its host

Tick fly (Forcipomyia sp.) engorged with hemolymph viewed from above

What about the larvae, are they parasites too? The majority of the research on biting midges has focused on the adults, due to their economic and medical significance, as well as their important role in aquatic ecosystems. Larvae of most ceratopogonids are unknown because finding them in their natural habitats can be challenging. They usually inhabit aquatic and semiaquatic habitats, but in the case of Forcipomyia the larvae are terrestrial and prefer to feed on moist detritus and organic matter under bark or in moss. In some species they feed on algae.

This stick insect is staring at me with tired eyes. I wonder if it is aware of the two hitchhikers it is carrying?

With so many aspects of their life history still unknown, and especially due to their ecological and economical importance, you would expect to see more active research on Forcipomyia. The bad news is that there is not enough research going on. A few years ago, I approached Dr. Stephen Marshall, a dipterologist from University of Guelph, and suggested doing a PhD study about Forcipomyia’s biology, phylogenetics, and their relationships with their hosts. I was politely refused, unfortunately. I still believe there is potential for a cool project involving Forcipomyia, maybe someone will pursue it in the future.

6 thoughts on “Little Transformers: Forcipomyia, the midge that turns into a balloon”