I have been covering a lot of insect-inspired art on this blog recently. It makes me excited; there are so many beautiful examples of artwork that incorporate insects and other arthropods into their theme. Just by reading some of the comments on the previous posts I got a gazillion new ideas for topics to write about (thank you). This time, however, I want to take the opportunity to tell you about something that I have been working on. The title for this post is a little misleading, because this is not really ”insect art”, but more like “arachnid art”.

One of the first presents I got from my parents when they realized their kid was fascinated with insects was a frame with several tropical butterflies. This frame, along with others that joined in subsequent years, decorated the wall of my room for many years. They became a part of my identity, telling every visitor what I was all about. Throughout the years my focus shifted from butterflies to spiders and scorpions, and then to beetles and other arthropod groups. Yet those framed insects remained on the wall, and even though I left that house many years ago they are still hung there to this very day.

Framed arachnids, whip spiders and a tarantula. Read on to learn what is so special about these.

I got so used to hearing wows every time someone noticed the spectacular sunset moth, the blue morpho butterfly, or even the less colorful dobsonfly, that when one day a friend told me she didn’t like those frames, it caught me by surprise. I asked her why, and she replied, “An animal had to die so you can enjoy this”. And by all accounts, she was right.
That reply stuck with me. I do not consider myself much of a collector, but when I do collect there is always a conflict. Is this necessary? Is this going to help anyone in the future? In my travels I have seen many dead insects, tarantulas and scorpions being offered as home decor for sale in city markets. It is shocking to realize these animals are probably harvested from their natural habitats by the hundreds for this purpose. To be fair, some butterfly and beetle species are being farmed and thus the ecological impact on their natural populations is insignificant. However, insect frames still require a dead specimen to begin with.

A framed rhinoceros beetle (Eupatorus gracilicornis) that I made. You might not believe it, but this specimen was in very poor condition when I received it.

In the past I have sinned in trying to make my own version of such frames. In all honesty, when done correctly, they do look nice and add some character to a room. Almost like an old natural history lithograph. I did this with dead insects from my own cultures, or with specimens I already had in my collection. But recently I was wondering if there is another way to achieve the same result, one that does not require dead specimens. Something more sustainable.

Me presenting whip spiders to the general public at Bug Day Ottawa 2016. Framed specimens can be used for education along with live ones.

Whip spiders, or amblypygids, are rarely offered as framed specimens, but when they do, they usually look very bad and have an unflattering, unnatural pose. I mean, look at this one for example. It looks horrible. Now look at how much this specimen costs. It makes no sense to me that an animal gave its life to be preserved in such a horrendous way, accompanied with such a hefty price tag. This is also coming from a company that claims to farm its framed specimens, however I highly doubt they farm any of their arachnid specimens. Large arachnids take years to reach their adult size, and it would not be very profitable to farm them just for the purpose of framing them later. Moreover, dead arachnids (and many insects too) often lose their vibrant colors. There has to be a different way to do this. And there is: during my time keeping amblypygids, I noticed that their empty molts retain their appearance even after many years, and when arranged properly they look like a copy of the living animal. I made some exemplars for use in public outreach and the response was phenomenal. When I presented the prepared molt next to its still-living parent, people refused to believe they are both the very same specimen.

Whip spider (Heterophrynus batesii) fresh after molting in the wild. The molt (on the left) is a hollow empty shell, but looks just like the live arachnid.

Whip spiders molts, work in progress before framing. Oh, and that tarantula? That is a molt too.

Working with molts is not easy and resembles taxidermy in many ways. It requires deep understanding of the animal’s natural appearance, as well as how to stabilize its now-empty limbs. It took me many months of practicing until I finally mastered the technique of making a hollow arachnid look alive. The best thing about it – no animal was sacrificed during the preparation, and in fact the very same animal that produced the molt is still alive and kicking.

Now this begs the question – what am I going to do with these frames? I enjoy looking at them a lot actually. They add something authentic to my living space. I thought about putting up a page to offer them for sale at some point (update: that page is now up!). The only problem seems to be availability, because whip spiders usually molt only once a year. I will need to salvage every single molt if I want to continue making more of these. 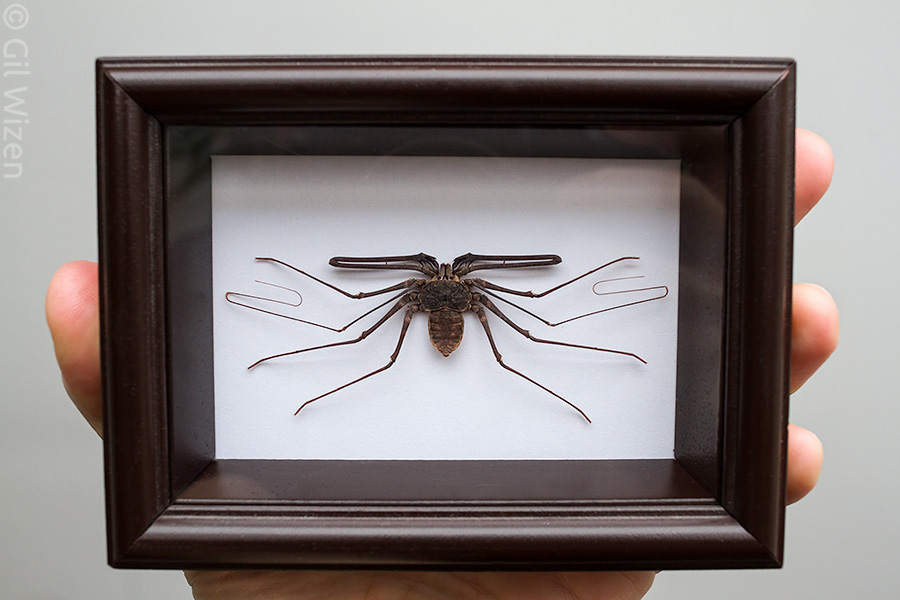 By the way, if you want to hear more about whip spiders and you happen to be in Toronto this weekend, the Toronto Entomology Association and the Royal Ontario Museum are organizing “Bug Day”, an event dedicated to the keeping live arthropods. I will give a short talk on Sunday April 23rd at noon, so please come and say hi.