I have a confession to make: I love anime.
It should come as no surprise, especially after my post featuring an animated cockroach video. I cannot seem to trace back when my interest in anime has started, but it has been there for a while since childhood. It would be difficult for me to explain why I love this form of media so much, as well as it predecessor, the Japanese manga. I love everything about it: The character design, their well-crafted stories, the overly detailed backgrounds, and the wink to some of Japan’s culture. And what is better than having your interests collide and merge into one? There is some extensive use of insects and other arthropods in manga and anime, but it is so subtle that you may have not even noticed it.

A field of plain tiger butterflies (Danaus chrysippus). From “Natsume’s Book of Friends”

To start off, Japan’s culture has an interesting relationship with insects (collectively called mushi). It is a nation that embraces the eccentric and weird, where insects are a part of the mainstream. They are mostly not feared from, but admired and respected. Japanese people enjoy listening to singing insects, observing the behavior of fighting insects, and in some areas even eat insects. I will not go into much detail about the Japanese beetle culture (as this is a topic for a full post by itself), just mention that it is widely accepted for kids (and adults) to keep beetles as pets, and you can buy a variety of beetles and their breeding supplies in stores. The popularity of live beetles in Japan is no less than that of cats and dogs. It is a pity that the rest of the world is a bit lagging in this regard. There are numerous Japanese books dealing with insects as well as insectariums targeting children. In addition, every summer kids in Japan catch and play with insects, from dragonflies and butterflies to cicadas and water bugs. The result is that almost no children in Japan are afraid to handle insects. With such a culture, the children are also always connected to nature.

And this brings me to art. With mushi playing such an extensive role in Japanese culture, it is very easy to find representations of that in art. I am going to focus mainly on examples in anime but it is important to note that insects can be found painted, sculpted, or carved in everyday objects. The mushi culture is truly overwhelming; this post is merely scratching the surface.

Without exception, the insect that is most commonly used in Japanese art, and specifically in anime and manga, is the singing cicada.

Cicada molting into its adult stage. Beautiful use of insect biology from Makoto Shinkai’s “The Garden of Words”

The emergence of larval and adult cicadas represent the onset of warm summer, and these insects are used to give a sense of time for the ongoing plot. This is usually done by showing cicadas singing while clinging to trees, poles etc’, even in an urban envronment. In anime the sound of singing cicadas is used to represent summertime even without actually showing cicadas in the frame. 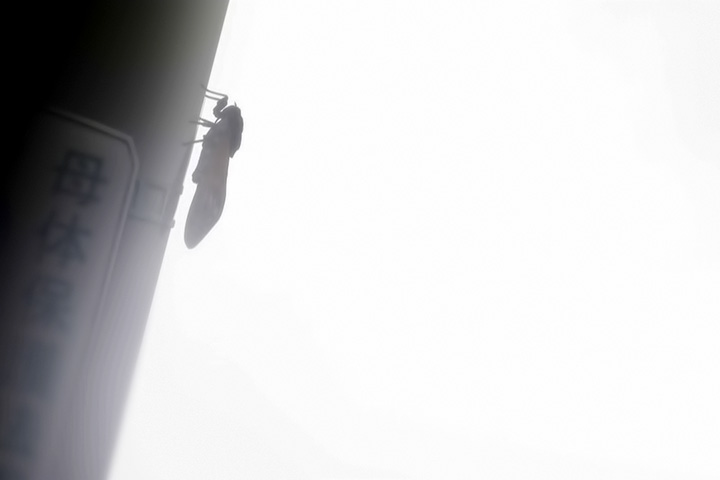 Singing cicada on a street lamp post. From “Steins;Gate”

Unique styling on this singing cicada. From “Welcome to the NHK!”

Cicadas are also used to show the end of summer, by depicting a dead cicada falling from its perch, or a carcass on the ground.

Dragonflies are another commonly used insect in anime, usually to give the sense of a bigger picture; despite what just happened in the plot, it is but an insignificant event and life around is still going on. This adds a dramatic impact to the more serious anime genres, in moments where a catastrophe just took place. 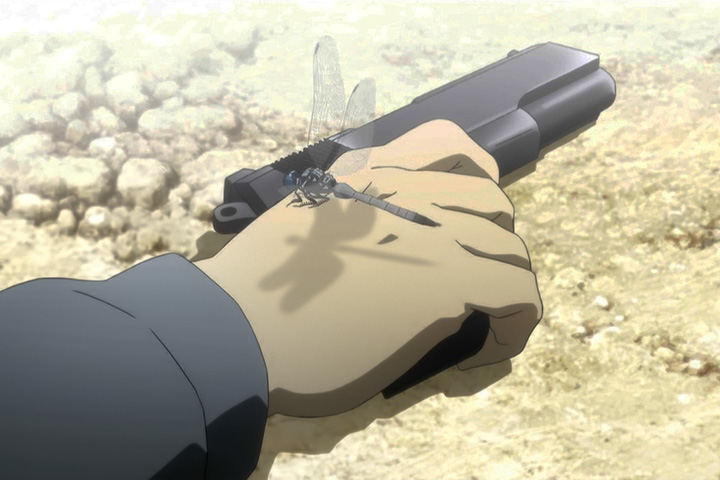 Life goes on. From “Steins;Gate”

Other insects are used to depict different emotions. Fireflies usually represent a special event in the life of the characters, whereas singing insects evoke curiosity and a sense of exploration.

One day I will take a firefly photo just like in this scene. From “Encouragement of Climb”

Observing a Japanese bell cricket, suzumushi (Meloimorpha japonicus). From “Anohana: The Flower We Saw That Day”

Spiders and other predatory arthropods are usually used as a sign for danger. I wish it wasn’t the case. I can only hope that one day arachnids are going to represent beauty and complexity in popular culture, but it seems we still have a long way to go.

The spider had nothing to do with what happened in this scene. From “Aoi Bungaku”

Which spider family? From “Aoi Bungaku”

In Japanese mythology, the golden orb-web spider (Nephila clavata) is considered a shape-shifter that seduces young men. From “Beyond the Boundary”

Somebody is in ambush, and I don’t mean the mantis. From “Sword of the Stranger”

Another important part of the Japanese insect culture is the appreciation and celebration of insect diversity. The collecting of insects is explained and demonstrated in both manga and anime as a fun activity for the summer days. The “Endless eight” plotline from anime The Melancholy of Haruhi Suzumiya relies heavily on an insect collection trip as its main setting. Although the characters are out to collect cicadas (they release them eventually, in case you wondered), many insect species are shown, including beetles, butterflies, bugs and grasshoppers. 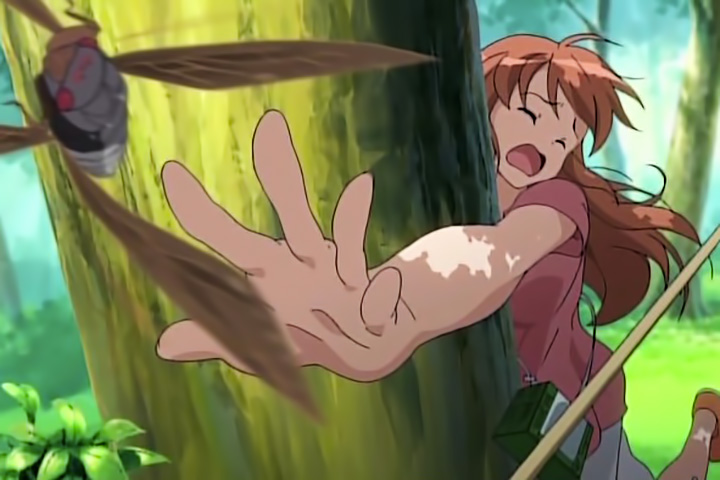 More specifically, rhinoceros and stag beetle species are represented in great detail and are often referred to by species name. In the series Natsume’s Book of Friends there is a split-second scene in which the main character flips through an insect book from his childhood. It is hard not to appreciate the accuracy shown in that short scene, all the insects can be easily identified to the species level (and probably even mentioned by name, too bad I cannot read Japanese). In the screenshot below you can recognize the various subspecies of the atlas beetle (Chalcosoma atlas), neptune beetle (Dynastes neptunus), eastern Hercules beetle (Dynastes tityus), western Hercules beetle (Dynastes granti), and the rare satanas beetle (Dysantes satanas).

As with any type of collecting activity, some specimens are highly prized and receive special attention.

“A golden stag beetle!” From “Teekyu”

Beetle fights are also a common theme. One good example is a whole franchise centered around the world of rhinoceros and stag beetles. Musiking included a manga, an anime series, and an arcade game complete with activation cards containing information about different beetle species. It even had collectible merchandise (beetle models) that sold very well. More than anything, Mushiking exposed kids to the huge diversity of fighting beetles, and there are even reports claiming that this franchise is responsible for the rise in popularity and illegal trafficking of certain beetle species in Japan. The concept of beetle fights as a game of gambling is also explored in some anime. For example, in the series Samurai Champloo, the character Mugen is shown training a Japanese rhinoceros beetle, known as kabutomushi (Allomyrina dichotoma) by letting it pull weights. Later he is seen putting his trainee to the test, while a crowd of drunk people cheer in the background. Allomyrina dichotoma has a long-standing status in Japanese culture because of its unique male horn and strength. It is extremely popular as a pet species, and even has toys modeled after it.

There are many more excellent examples out there, but I hope I convinced you that insects have an important place in anime. In fact, while researching anime series for this post I came a cross several dozens of additional examples that I missed during my first watch of the shows. So why am I writing about this? This is the first of two posts dealing with the use of insects in animated media that I really like. I thought it would be interesting and refreshing to depart a little from my usual posts about natural history and present you with a different aspect of who I am. Shocking, I know. Wait till you read the next post. I promise it will be fun, so please stick around.

—————————————————————————-
* This post makes use of copyrighted material for the purpose of commentary under fair use.
** This post is also a response to some people who tried their best to mock me about my anime-watching habits. I don’t see how pointing out someone for having a hobby that they love can ever be considered as an insult. If you are one of those bullies, take a good honest look at your own hobbies and answer me this – do you feel ashamed for your personal interests? No? Didn’t think so.
So why should I be.

3 thoughts on “Insect art: The use of insects in Japanese anime”