Imagine a world where humans have disappeared, while animals transformed into humanoid form but stayed true to their natural behavior and preferred habitats. This is the premise of Kemono Friends, an anime series from last year that surprised everyone and became very successful despite its seemingly low production value. It presents the dreamworld of Japari Park, a mysterious deserted zoo that houses animals from around the world (in the form of cute girls). In fact it was so successful that it generated a global cult following, regardless of gender, origin, and even species (if you are not familiar with the story of the old male penguin that fell in love with a cardboard cutout of one of the characters, read it here – it will melt your heart …and then its tragic ending will break your heart). Full disclosure: I did not watch the series, so I decided to test it out and watched one episode. I must say that despite my low expectations, I found it entertaining. You see, to enjoy Kenomo Friends you have to look beyond what it is on the surface. Leaving the plot and the quirky animation style aside, the naturalist in me liked the way animals were portrayed in the series, and appreciated the information presented to make viewers more familiar with their real-life counterparts. I am sure the series itself has great potential (want to see an interesting take on it? watch this). Anyway, the series deals with cute girls modeled after animals (mainly mammals and birds), also known as gijinka, however invertebrates were left out of the series. This is a real shame, because the huge diversity of invertebrates could inspire a similar diversity of characters, sparking interest and evoking respect and appreciation for these animals.

But do not fret. Several independent artists decided to do just that: designing their own arthropod-themed characters, while drawing inspiration from the anime series. One of them is Jun (@ni075 on twitter), an artist from Malaysia, who has spent the last months creating incredibly detailed arthropod gijinka. After discovering his art and following his posts he quickly became one of my most favorite artists. He kindly agreed to talk about his work and describe the process of creating the characters.

What exactly is gijinka?
Jun: “Gijinka (擬人化) means anthropomorphized characters based on any non-human subject (non-human characters, organisms, non-living things etc’). However, not all characters inspired by non-human subjects are gijinka unless the artist states they are (for example, characters with cat ears and tail are not always meant to be a cat’s anthropomorphism). There are no guidelines for gijinka but in general, instead of a non-human characters bearing human-like features, gijinka always come with a full human body at least in appearance, which sometimes makes them looks more like a cosplay based on their model. This type of anthropomorphism is also called Moe gijinka (萌え擬人化, see here for more details). There are many examples for gijinka products that follow these rules in Japan, such as Kantai Collection (warship girls), Touken Ranbu (sword boys), Houseki no Kuni (genderless human-like minerals), and Kemono Friends (animal girls).”

How did the idea of creating arthropod-inspired characters come to life?
Jun: “The idea of arthropod gijinka originated few years ago (during my high school days), but I started working on this series in May 2017, so only about half a year. I do not have any background in character design, the same goes for fashion and cloth design. This is my first original character series ever made. I think I was inspired by Kantai collection, a web browser game with the theme of warship gijinka, which I played throughout several years. The biggest inspiration came from the Kemono Friends series and the twitter user 小森雨太 (@comori_uta) who makes insects and other bugs gijinka as fanart “friends” (friend = gijinka individual in Kemono Friends). I love arthropods since childhood, from the infamous terrestrial bugs to the rather famous crustaceans. As the arthropd gijinka series took off, I decided to also debunk the common misconceptions people have on this fascinating and important group of animals.”

How do you choose which arthropod species to use as the model?
Jun: “Most of them simply come on a whim, and few are requests I get from other users. If possible, I will choose a ‘typical’ species at first. For example, I chose the water flea Daphnia pulex for having typical characteristics and being a well-known representative of its taxonomical group. Later I decided to make another character from the same group but based on a different species – Leptodora water flea. So in this case I used the first work as a basic design, and then added the characteristics that differentiate between the species. In some cases I make an exception and choose the “unique” species as the first character of its group, like in the cases of Chiasognathus grantii for a stag beetle and Rhagodes melanus for a camel spider. Both have quite a different body plan compared to other representatives of their groups (small-headed; short-legged, respectively). Though the creation process is still somewhat the same, in which I at least try to imagine how the ‘typical’ one looks like. For the examples mentioned above I chose Prosopocoilus stag beetle and the camel spider family Galeodidae, and used those as the basic design and made changes to it.” 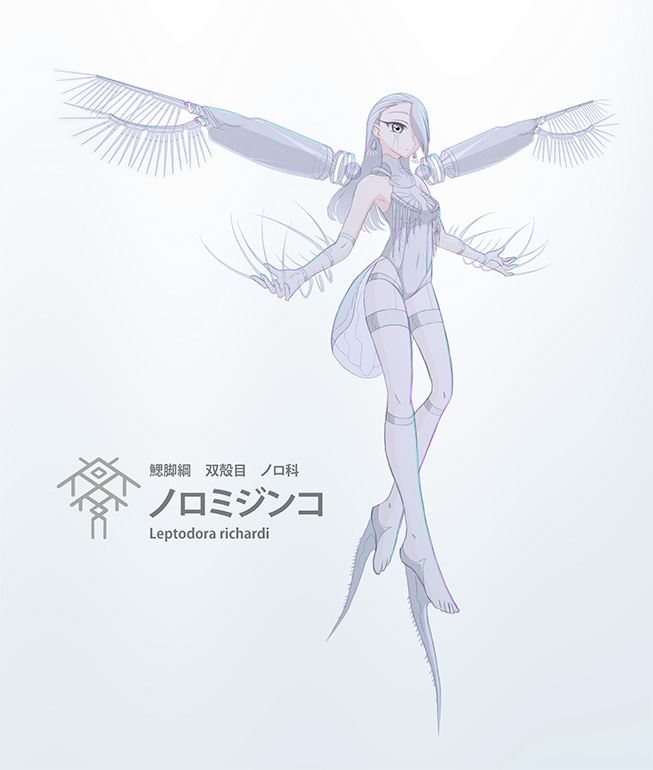 Leptodora richardi, a water flea. This is one of my favorite designs by Jun; if you are not familiar with this animal please search for it online. He really captured the essence of this crustacean.

One thing I love about Jun’s work is his attention to detail. His designs are not only flawless in execution, but also show a great deal of accuracy when it comes to arthropod morphology. Here are a few examples:

Crematogaster ants have a characteristic, elegant abdomen. Artwork by Jun

Pseudoscorpion by Jun. Accurate. I don’t think I need to add anything here.

In the case of Myrmarachne, Jun not only captured the lively and inquisitive nature of the jumping spider, but also the intricate details of its appearance. I would like to draw your attention to the color of the eyes, and to the dark stripe running along the second pair of legs in the spider, and its corresponding element on the girl’s arms. Brilliant.

By the way, Jun was not joking when he mentioned getting work requests from other people. After discovering and admiring his work, I half-jokingly asked if we are ever going to see a girl modeled after Epomis beetle. He gave it a shot using the first-instar larva as the model, and created the following jaw-dropping artwork. Ground beetle larvae are hard to characterize to begin with, so needless to say I was very impressed.

Epomis circumscriptus larva by Jun. She is missing a pet frog by her side, but I will let this one slide…

What do you do to get the information you need for creating the characters?
Jun: “Almost all of the information is obtained through an online search. My personal experience and records will be included as well if I have encountered the species in real life. Photographs of live individuals and specimens are a major part of my research. I also search for identification keys since many arthropods can look very similar between species or even higher classifications. Searching for taxonomy and behavior publications written by specialists is a must-do as well.”

As a side note, when you follow Jun’s posts on Twitter you get a first-row seat in viewing his entire creative process, and I do not mean just random posts showing work-in-process. You are exposed to the initial research, morphology studies, first sketches and outfit design, head design, and final character design. I find this not only fascinating to watch, but also quite engaging.

Jun: “I mainly express the species characteristics through clothes design, while leaving the hairstyle and face for last, because it has a big influence on the character’s personality. As all of my gijinka are created down to species level, I want to make them different from each other, each one with its own unique look. The Introduction corner is based on the one used in Kemono Friends anime, which appears on the screen when the animal girl makes her first appearance. The format I use is slightly different from the anime, and includes: class-order-family; Japanese name; scientific name.”

Rhagodes melanus, a camel spider by Jun. Another very impressive achievement; this is an animal that rarely gets any positive attention, not to mention the difficulty to portray it well in art form.

“I try to avoid including religion, culture, narrative or any other human-related elements of the animals in my gijinka’s design. The main reason is that those are not the characteristics of the animal itself. Moreover, many of those elements are based on misconception, which is something I try to debunk through the design itself. I want to show the true nature of the animal, instead of repeating people’s wrong impressions and stereotypes.”

How long does it take to complete each work, from conception to finished artwork?
Jun: “The time can range from 3 days to 2 weeks. In most cases I spend up almost a week throughout the process: 1-3 days for research and concept, 2-4 days for the final artwork.”

Another interesting aspect in Jun’s characters is the eyes. “While most of the gijinka will have the animal’s eyes reconstructed around the character’s head like an accessory, I decided to go against this rule and make the human eye more similar to the species’ eye itself. In extreme cases like huge eyes or stalked eyes, I reconstruct it as an accessory in a non-eye-like design.”

This is very apparent in the following examples, the split-eyes of Chiasognathus grantii stag beetle, or the six clustered stemmata (simple eyes) of Epomis larva are perfectly depicted in the characters’ eyes.

A Composite image to show the level of detail in characters’ eyes. Chiasognathus beetles have split eyes, while Epomis larvae eyes consist of six stemmata arranged in a cluster. Jun expressed these features within the iris of both characters.

How many characters do you plan to make?
Jun: “Actually I haven’t set any limit for the number of characters, so the plan is to make as many as I possibly can. But I want to make more characters representing different taxonomical groups. For example I still lack myriapods, and I have only two crustaceans.”

Damon diadema, a whip spider by Jun. Another personal favorite that shows the essence of the model species, from the presence of spines and sensory whips to the banded legs depicted here by belt straps.

I must admit that reply to my last question left me a little bitter. There is something about Jun’s work that makes me wish for more. For someone who is passionate about arthropods, it is pure eye candy. I would love to see it becoming something big, a collection perhaps. Hey, I even find myself fantasizing about a spinoff anime series or a manga following the arthropod girls’ adventures. For the time being, I will continue to enjoy whatever I can find on Jun’s twitter. But I can dream, right?