Ah, the joy of transforming beetles. The first Little Transformer that opened this series of posts was a beetle – a Ceratocanthinae pill scarab that transforms into a perfect sphere and drops off to escape predators. It is an impressive evolutionary achievement that merges a successful body design and anti-predator behavior. I should mention though that many beetle species from other families use this strategy to avoid predation, some more successfully than others. One such example is a genus of small beetles from the leaf beetle family (Chrysomelidae): Lamprosoma. 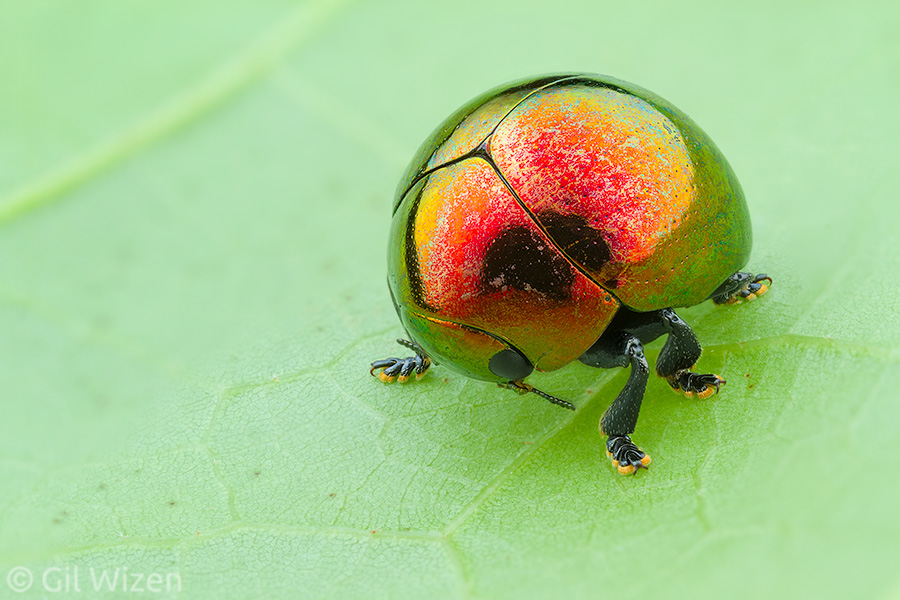 When I first encountered a Lamprosoma beetle I thought it was a piece of plastic that someone discarded in the rainforest. There is something almost artificial about their appearance, shiny metallic colors combined with a compact shape. Not all species are colorful, by the way. The genus contains about 130 species, all with a neotropical distribution, some of which are completely black in color. With a body length of less than 1cm they are easy to miss in the dense vegetation of the tropical forest. Nevertheless, over the years I have encountered them more and more frequently. Unfortunately for me, identifying these beetles to the species level requires an expertise that I do not have, because there are many similar-looking species, and possibly also new species that have not been described yet.

The beetles are dome-shaped, and have very short legs. I think “cute” is the best way to describe them. As mentioned above, Lamprosoma can transform into a ball when threatened. In contrast to Ceratocanthinae beetles that have dedicated grooves to hold the legs and head in place, members of genus Lamprosoma have no such features. The beetle tucks in its head and holds its legs tightly close to its body, making it a neat impenetrable package.

Shiny leaf beetle (Lamprosoma sp.), a ventral view showing how neatly they press their legs against the body when forming the ball 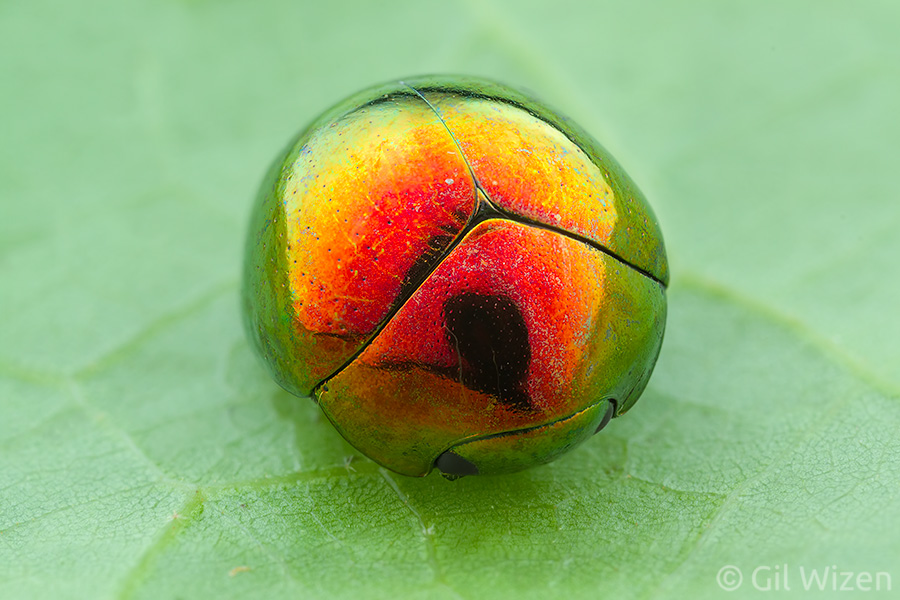 In species with shiny metallic colors it is hard not to see the resemblance to the glass balls used as Christmas ornaments (maybe an idea for a future product?). Once the danger is out of sight, the beetle loosens its legs and walks away.

Shiny leaf beetle (Lamprosoma sp.) transformation sequence from ball-mode to beetle-mode. How can you not fall in love with those stubby feet?

Lamprosoma are phytophagous beetles, meaning that they feed on plants. Both adults and larvae feed on leaves, and can be potential pests due to damage they can cause to foliage. The species shown here seem to be associated with cacao trees, and were found under leaves during the day. While the adults are very showy, the larvae are cryptic to avoid predators: they construct a case from frass and wood debris, and carry it around throughout their lifetime. The case is often shaped like a bent thorn, and blends perfectly with the branches the larvae live on. When threatened the larva retreat into the case and hold it firmly against the branch, preventing predators (such as ants and wasps) from accessing inside.