Out of all the different microhabitats plants provide for organisms, the living leaf is arguably the most underrated one. On the surface it seems that it pales in comparison to the rich leaf litter of the forest understory, or to the complex bark of trees that provide hiding and hunting spots for many animals. However, although the green leaf may look innocent, it in fact holds many stories of deception and survival. The upper surface of the leaf offers exposure to sunlight and water, as well as additional nutrients coming from above. It can serve as a solid base for the growth of ferns, mosses, lichens, and fungi. It can also be folded and glued to create a nest or shelter for an animal or its eggs. Not to mention that in many plants the entire leaf comprises of edible material available for herbivores. But there is another plane of existence, a much darker reality. It is located in a parallel dimension – an inverted copy of the leaf upper surface. This is the upside down world of the leaf underside. Many organisms live here; some only take shelter during the day and resume activity on the upside world at night, others prefer to feed under the leaf to avoid predators. But one of the most fascinating examples is a group of predators that learned to utilize the leafy upside down for ambushing prey. I have already written about two of those, and today I would like to present another member of this guild: Lyssomanes, the green jumping spider.

Green jumping spider (Lyssomanes sp.). The spider’s pale color helps it to blend in with the leaf it is sitting on.

At first glance Lyssomanes doesn’t look like a typical jumping spider. It has very long and slender legs, and prefers to move by running and using short leaps as opposed to the jumps that characterize most members of the salticid spider family. In addition, the spider is almost completely hairless, sporting a pale body color, usually (but not always) green, and occasionally semi-translucent. Unlike other jumping spiders, the only scales covering the body are clustered as a crown on its head. Those can be white, yellow, orange, red, or any combination of these colors, depending on the species and developmental stage. Sometimes dark banding is present on the legs, usually in adult males.

Green jumping spiders (Lyssomanes sp.) often have a glossy, semi-translucent body, with a crown of colorful scales on their head.

The genus Lyssomanes contains around 90 species, all distributed in the Americas. Many species have similar external appearance. The type species from which the genus was described is named Lyssomanes viridis (from Latin – green jumping spider), but if I want to be completely honest, almost every species I encounter looks ‘viridis’ to me. They are just so green! 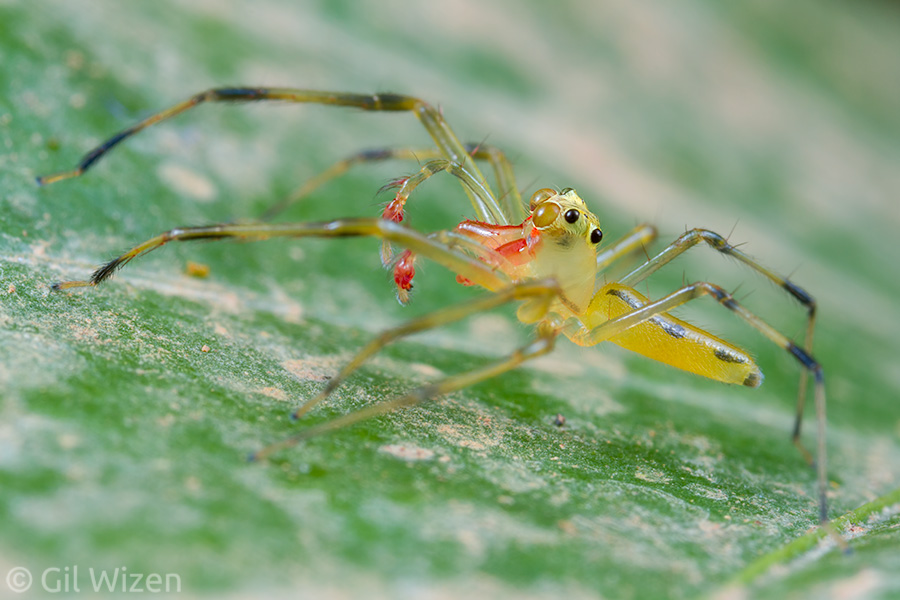 Not all Lyssomanes jumping spiders are green. Some are lemon yellow like this species from Belize.

One of the most noticeable features of Lyssomanes jumping spiders is their enormous anterior median eyes. Because of the spider’s pale color, it is also very easy to observe the internal retinal movements as the spider angles and focuses its field of view. The eyes may appear black at times, or pale green, crossed, or alternating (here’s a fantastic video showing this, and watch what happens when an ant passes by!).

Green jumping spider (Lyssomanes sp.) staring straight back with its huge eyes. If you don’t think it is cute you might want to check your pulse.

Female Lyssomanes are very modest in their appearance. Males on the other hand, are impressive beasts with long pedipalps and elaborate chelicerae, often armed with thick setae and teeth. The latter are used in male fights for mates. Males also have extremely long legs, which they use for pushing an opponent and waving to females as a part of the courtship process.

Male Lyssomanes spiders have long legs and pedipalps for signalling conspecifics, and often sport impressive chelicerae for fighting other males. 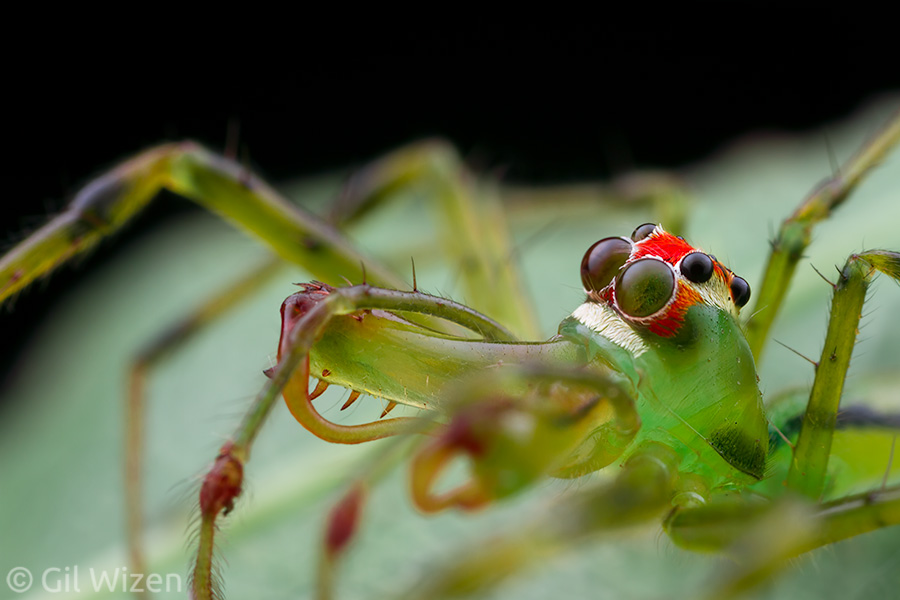 Closeup on a male Lyssomanes spider. Notice the teeth on the long chelicera.

Portrait of a male green jumping spider (Lyssomanes sp.) with his long chelicerae

Similarly to other predatory dwellers of the leafy upside down, Lyssomanes spiders deploy an ingenious hunting technique. The spider’s huge eyes are a good indication of its hunting method – it uses its excellent vision to locate prey. Lyssomanes jumping spiders are diurnal sit-and-wait predators of dipterans and other soft-bodied arthropods. They prefer to sit on leaves that are exposed to the sun, waiting in ambush for a visitor on the upper surface to cast a dark shadow. If the shadow is of the right size and shape the spider will shoot itself from the underside to the upper leaf surface and snatch the unsuspecting prey.

Male green jumping spider (Lyssomanes sp.) ambushing prey on the underside of a leaf backlit by the sun

Occasionally, if sunlight is obstructed, the spider will explore the leaf and actively search for passing insects. It does not, however, stay loyal to one leaf. Once spotted, the spider usually does not take any chances and relocates to a nearby leaf. 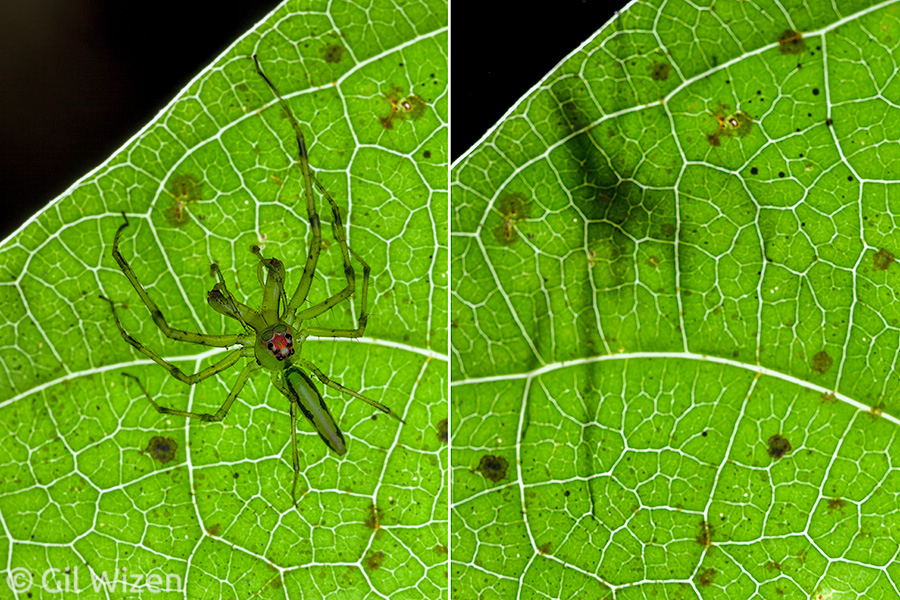 Snap! When startled, the green jumping spider (Lyssomanes sp.) swiftly moves to the other side of the leaf.

Although jumping spiders rarely use silk for hunting, most of them build a small silky sleeping bag inside a crevice or a folded leaf for resting at night and molting. Lyssomanes is unique in that it does not construct such a shelter. Instead, it lines the underside of the leaf with a thin carpet of silk, and rests on it completely exposed.

Green jumping spider (Lyssomanes sp.) spinning silk on the underside of a leaf

Gravid females construct a similar web for their eggs. Passing insects often trample the sheet, which triggers a predation response from the spider. 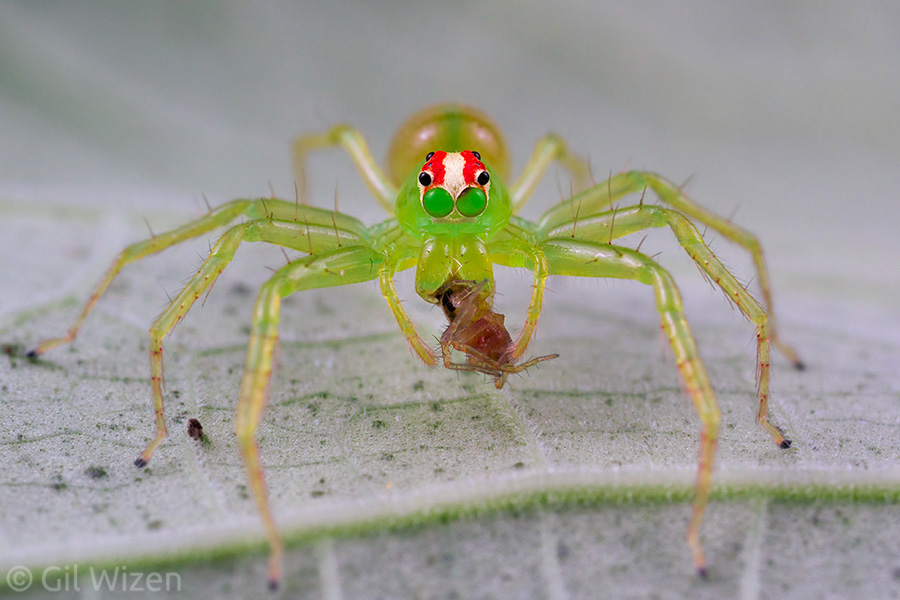 Cannibalism is common in salticids. Here, a green jumping spider (Lyssomanes sp.) is preying on a smaller spider that happened to walk on its leaf.

Unfortunately, this habit of Lyssomanes to sit exposed also means that they are sitting ducks for other predators, usually other species of jumping spiders. Remember – it is a harsh world out there and it’s not easy being green!

The grass is not always greener on the other side of the fence – a green jumping spider (Lyssomanes sp.) has fallen prey to another jumping spider!