I recently joined as a contributor to Meet Your Neighbours – a global photography project that sets out to connect communities with their local flora and fauna, and promotes nature conservation. The idea is to record all possible biodiversity against a clean white background using a simple field studio. By stripping the subjects off their natural surroundings they become the center of attention, provoking more interest. Another benefit from photographing against a white background using a standard protocol is that all subjects from different parts of the globe get the same level of appreciation, regardless of their location or taxonomic group. This can reveal interesting patterns: when comparing subjects from different origins it is difficult to say which is more exotic. In other cases, subjects that are physically very distant from each other share many similarities in appearance.

Ocellated Skink (Chalcides ocellatus) modeling for me on the white backdrop

I discovered Meet Your Neighbours in 2010 and was immediately hooked. I liked this style of photography, which reminded me of old natural history books featuring illustrations of plants and arthropods. At that time I was already trying to achieve similar results in my photography, only I was using white paper as background so the effect was a bit different. For this reason I was delighted and honored when Clay Bolt, one of MYN founders, contacted me in 2013 with the offer to join the project. For me this meant one main goal – presenting species from Israel, even though I am based in Canada and travel quite extensively to other countries.

Darkling beetle (Erodius gibbus). This is perhaps the most easily recognized beetle in Israel (after the overrated ladybug). Its small size, oval shape, and matte back color are unmistakable. This species also has a wide distribution range in sand dunes along the Israeli coast, and it can be found in the desert as well.

Israel is located at the bridge of three continents – Europe, Asia and Africa. Due to its geological history and a variety of ecological conditions, Israel is characterized by a climate gradient from north to south, and to some extent from west to east. This creates many habitat types throughout the country, which are home to an impressive diversity of animals and plants. Most species in Israel are typical to the Mediterranean region, but desert species can be found in south of the country, whereas species from colder origins like Europe and Asia are found in northern Israel. For the latter Israel is the southernmost point in their distribution. Some species of tropical origin can also be found in the oases along the Great Rift Valley.

I decided to start my contribution to MYN from the very base, the creatures I know well from the places I explored as a kid.

The semi-stabilized sand dunes of Israel are home to the beautiful ground beetle Graphipterus. A recent study revealed that instead of the single species G. serrator, there are actually three similarly-looking Graphipterus species in Israel, each with its own distribution. This beetle, from the Central Coastal Plain, seems to be a new species to science and is currently being described.

I grew up in a city in the Central Coastal Plain of Israel. I had the fortune of spending my childhood with a lot of nature around me. Wildflower fields, Citrus orchards, temporary ponds and sand dunes were at walking distance from my house. Every weekend I would go out in the morning and get lost somewhere in the wilderness, looking for interesting animals. And there was much to be discovered: tame snakes, skinks, beautiful insects like beetles and mantises, frogs and spiders. I used to rear butterflies in my room because I was fascinated with the transformation from a caterpillar to the adult butterfly. I am still fascinated by this metamorphosis even today, although I focus on other insect groups.

This spring, I took a short research trip to Israel, and used this opportunity to document some of my favorite animals. I hope that through these photographs people can learn more about the diversity of the country and maybe in time will even consider visiting!

Mediterranean banded centipede (Scolopendra cingulata), one of the most commonly encountered arthropods under stones in the Central Coastal Plain during the spring season

Compsobuthus schmiedeknechti, one of the smallest scorpion species in Israel. This adult female is only 3cm long, including the tail! 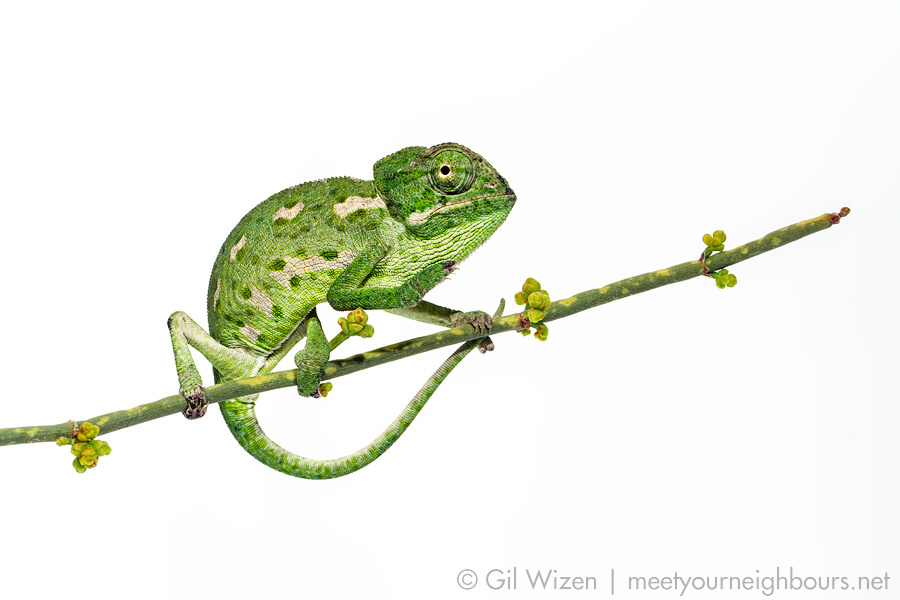 I was very fortunate to meet one of the most charming reptiles in Israel: the Mediterranean Chameleon (Chamaeleo chamaeleon rectricrista). Every encounter with a chameleon is always a splash of spectacular coloration and behavior. This individual was very cooperative and returned to its perch after the photo shoot.