It is intriguing that I do not post much about North American insects. In fact, ever since I moved to Canada I became more and more obsessed with animals found in my home country (Israel). Some might say this is a common case of “you don’t know what you’ve got till it’s gone”, but this does not mean that North American insects are not exciting or interesting. On the contrary, there are many insect species I hope to see in person. One of these insects rewarded us with its presence during a day trip to Hilton Falls Conservation Area in Ontario. I thought I should write about it and share a little bit of the process of photographing it.

Giant ichneumon wasps (genus Megarhyssa) are some of the biggest North American wasps thanks to the females’ long (10cm) ovipositor, which is longer than the wasp’s own body. These wasps might look fierce but they are actually shy and harmless insects. They are parasitoids: their larvae develop as parasites living inside the body of other insects. The female’s ovipositor is therefore not a stinger, but an organ used to inject eggs into the larva’s host.

During our trip we came across an egg-laying female of Megarhyssa macrurus. I only had a couple of small lenses with me and no dedicated macro equipment, but still, I did not want to miss an opportunity to photograph a Megarhyssa during oviposition. I tried to go for a simple wide-angle macro style first:

Very quickly I ran across one of the problems I mentioned in this post. The wasp is so thin and delicate and easily gets “lost” in the background, even when it is slightly out-of-focus. To get a better result, I started to cut broad leaves and placed them like tiles in the background. This photo was taken with the same, non-macro lens as above. Surprising result!

Megarhyssa wasps attack the larvae of another wasp, Pigeon horntail (Tremex columba), which bore into dead wood. The female can detect tiny vibrations coming from inside the wood by the feeding horntail larvae. She then proceeds to egg-laying: she bends her abdomen, exposing her ovipositor from its flexible sheath, and starts drilling. When she reaches a horntail larva, she sends an egg all the way down the ovipositor and injects it to the host. The parasitoid wasp larva feeds on the host and kills it, and then pupates inside the wood. The new generation of Megarhyssa wasps will emerge as adults in the following summer.

Back to the process of photographing – The next thing I wanted was to test the flexibility of the lens (I always recommend doing this), so I took a few more “creative” shots at different angles. What I like about this photo is that you can also see some of the previous holes this female drilled using her ovipositor.

The last goal was to get a dreamy background, showing some of the light entering through the canopy. This was a bit tricky, because the wasp was facing down towards the ground. Since I do not have special equipment (such as an angle-viewfinder or a tilt-screen), I had to be creative and improvise. Unknowingly, I had my photo taken while trying to compose the shot. I was completely unaware of my pose because I was too focused on photographing, and I guess some of the poses I tried might have been embarrassing for my trip partners… To tell the truth, I had no idea my body was even capable of getting into these positions. If you look closely, you can even see the wasp in this photo, it is very big!

Flexibility is important while photographing insects! Photo by Mio Konfedrat.

After much bending and neck-twisting I managed to get the shot that I wanted: 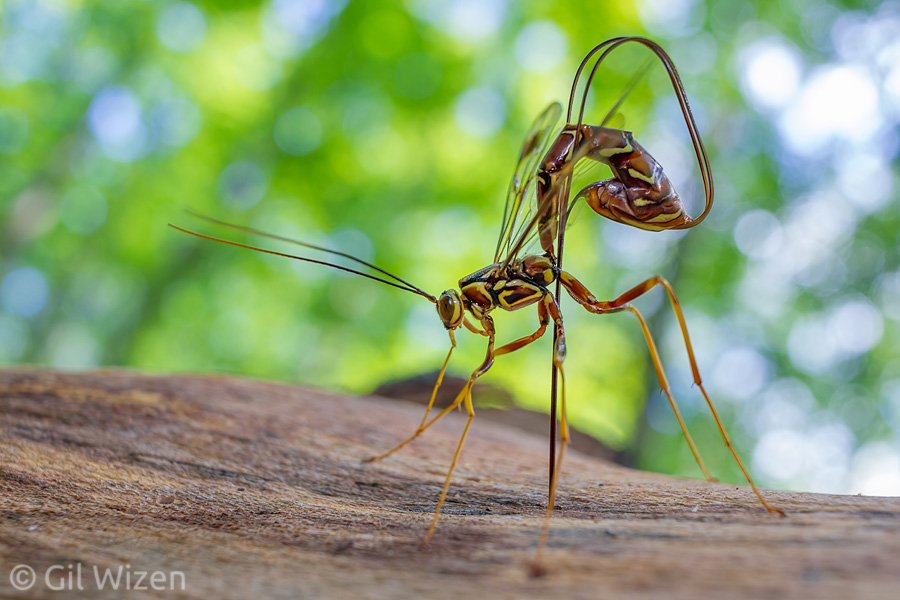 Nice to cross this incredible species off my “wanted” list.