Little Transformers is back! And this time our star is a small jumping spider that goes out of its way to masquerade as an ant.

I am often accused for not writing about topics related to Canada on this blog. While this is not entirely true, I could have without doubt posted more about local critters. It is a great time to do so now, as I will be taking the opportunity to address several events.
Firstly, it is now October, and we are getting closer and closer to Halloween (Oct 31st). Nine years ago, the Arachtober initiative was born: why wait till the end of the month to celebrate spiders? Let’s celebrate them and other arachnids throughout the entire month of October! And so, during the month of October we give arachnids more exposure in hopes to educate the general public about these magnificent and important creatures.
Secondly, a new initiative is slowly forming, International Jumping Spider Day, on October 10th. The idea is to use the easily adored jumping spiders as the gateway arachnid for changing the often-negative public perception of spiders. I wholeheartedly support this idea and hope to see it catching on.
Lastly, a shameless plug: You may have noticed that this blog is nominated for the 2017 People’s Choice Awards: Canada’s Favourite Science Online. It is a huge honor to be included with other excellent science blogs and sites on the same list. If you like the content and stories that I post, you can show your appreciation by voting following this link. I wish to thank those who already voted in support of this blog. While this nomination has nothing to do with spiders, I thought it is a great opportunity to write a blog post about an arthropod found in Canada. 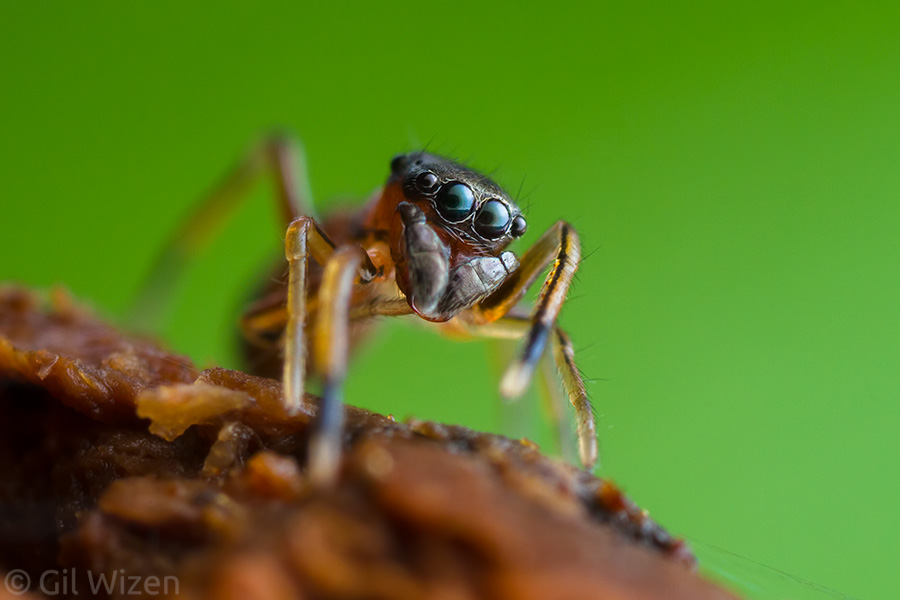 After this short introduction, it is time to present our first local Little Transformer, the ant-mimicking jumping spider Myrmarachne formicaria. It is one of the nicest looking spiders here in Ontario, and it is surprisingly abundant in its habitat. Alas, there is a small catch here. While this jumping spider is local, it is not native to Canada. This species was first detected in North America in 2001, and later established in Tommy Thompson Park in Toronto in 2015. It originates in the Palearctic region, more specifically Europe and Asia. Despite this, these spiders feel right at home in Toronto, as it seems that they are spreading away from the park containing the main population. This year, Sean McCann recorded Myrmarachne in Scarborough (east Toronto), and I found them in Mississauga (west of Toronto).

Myrmarachne formicaria is an elongated jumping spider that takes the appearance of a small ant, and here in Ontario it is associated with the European fire ant, Myrmica rubra, also an introduced species. Isn’t it interesting how these two non-native species managed to find each other on unfamiliar land? The spider has long and slender legs just like those of an ant, and the banded forelegs are slightly thicker to resemble antennae. The cephalothorax has a depression to echo the segmentation in ants separating head from thorax. The abdomen is long with a narrow connection to the cephalothorax, reminiscent of an ant’s petiole. Surprisingly, in this species the pedipalps (normally a distinguishing character between males and females) are swollen in females, a trait usually seen only in males. Males on the other hand have enormous toothed chelicerae that stick right out of their faces. I suspected this is a sexually selected trait used in fights for females, and this was later confirmed by Sean McCann (check out his amazing shots here). 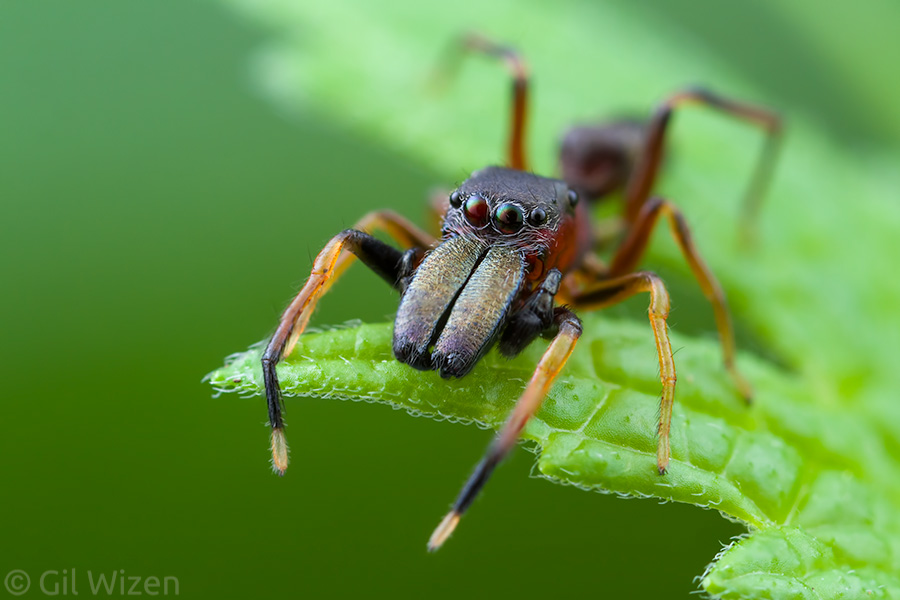 This begs the question, why do Myrmarachne spiders look like ants? Do the spiders use their appearance to fool the ants into thinking they are members of their own colony in order to sneak up on them and prey on ant workers or larvae? Not really. For starters, the ant species approached by Myrmarachne formicaria are usually not visual creatures. They rely more on their chemical communication, using volatile pheromones, for navigation and recognition. Moreover, the spiders seem to deliberately avoid any contact with the ant workers. They may walk among the ants, but they always keep their distance from them. In fact, when I experimented and isolated a few spiders within a group of ants, the spiders chose to stay still, and only when the path was clear they made a run for it. I also noticed that the ants display an aggressive response when encountering a spider. So the ants are not the target of this mimicry. Who is? Us. Or more precisely, predators. You see, the spider not only looks like an ant and spend its time close to the ants, it also moves like an ant. 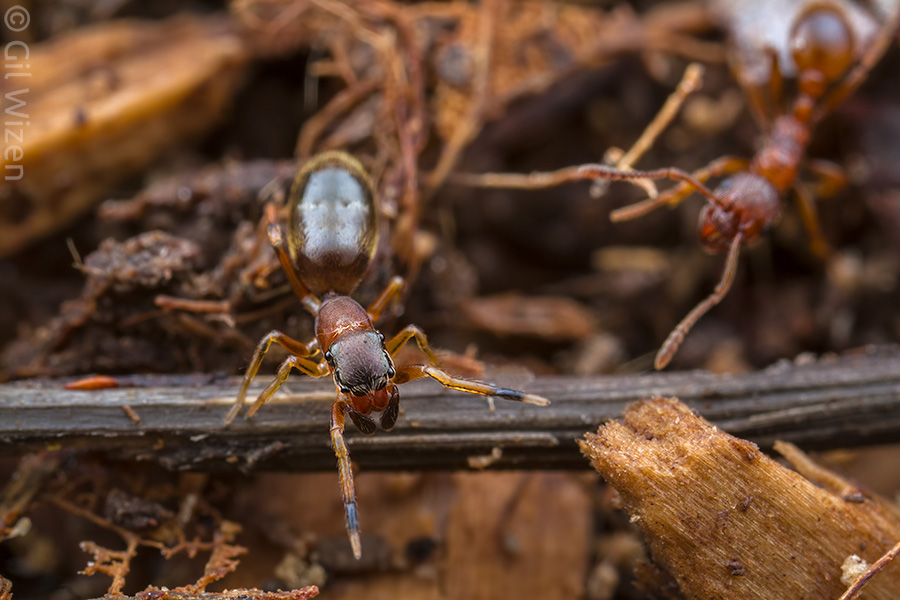 A recent study looked into the locomotion of Myrmarachne formicaria jumping spiders and found that they do not move like their peers. First of all, instead of jumping like most salticid spiders, they move forward in a series of short sprints. But they also move in a pattern that resembles the movement of ants following a pheromone trail, back and forth in a winding wave motion, instead of random strolling and stopping often we see in other spiders. If it looks like an ant and moves like an ant… it might be good enough to fool predators that it is an ant. And I can attest to this – it is extremely difficult to keep track of a Myrmarachne spider moving about in an area with ant activity. Look away, and you will need all the luck in the world to find it again. The spiders also benefit from being close to a colony of highly defensive ants. Myrmica rubra is easily alarmed and has its reputation when it comes to stinging intruders.

Some Myrmarachne formicaria feature a two-colored cephalothorax, to emphasize the part that mimics the ant’s head

If they do not hunt the ants, what do these spiders feed on? They seem to go after soft-bodied insects, and they are especially fond of dipterans: small flies, mosquitoes, midges etc’. 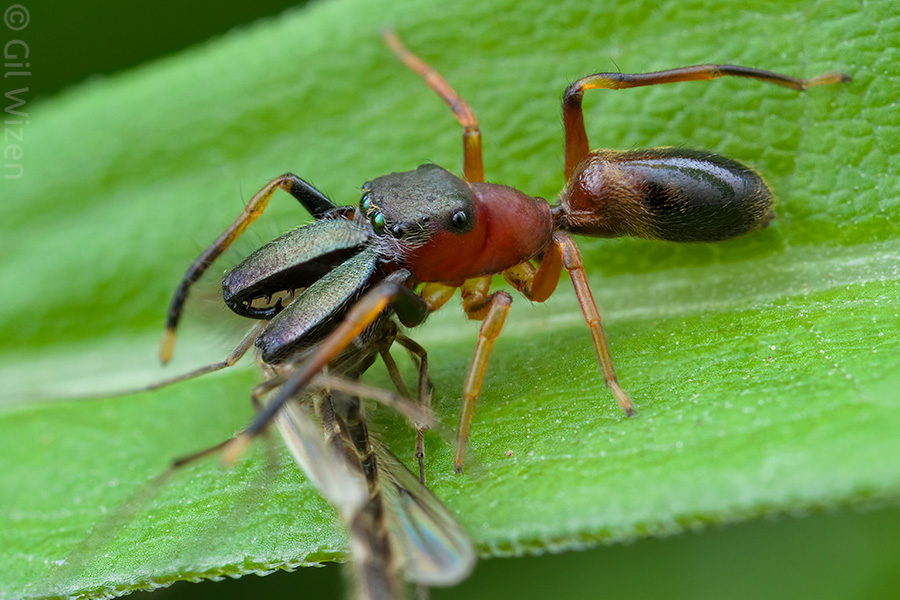 A closer look at the feeding Myrmarachne male reveals the weaponized chelicerae, used in fighting other males

At this point you might ask yourself why I included this jumping spider in my Little Transformers series. Sure, it mimics an ant, but that’s it. Or is it? In order to qualify as a Little Transformer the arthropod needs to change something in its appearance to transform into something different. So far we have seen that these spiders move in an atypical fashion to jumping spiders. But there is one more thing they do to conceal their salticid identity. What is the one, fail-safe characteristic of jumping spiders? Those huge front eyes! If only the spider could hide them, it would look like the perfect ant. And they do exactly that.

I look at this spider and I see an ant staring back at me.

Myrmarachne often wave their forelegs in the air to mimic the ants’ antennae, but the legs also hide their most recognizable feature, the bulging front eyes. Females seem to do a better job at this than males, transforming into ants right before our eyes.

Male ant-mimicking jumping spider (Myrmarachne formicaria). Even on a side-view I still see a weird duck…

What is most intriguing here is that the rear pair of eyes evolved to be very large, bearing a striking resemblance in their size and position to ant eyes.

Ant-mimicry is quite common among arthropds, and many species of jumping spiders deploy this strategy as an anti-predator defense or to assist in foraging. While some do not consider Myrmarachne formicaria as a case of perfect mimicry, it is a gorgeous spider with intriguing behavior. Besides, mimicry does not have to be perfect to satisfy our aesthetic desires. It only has to be good enough to benefit the spider’s survival.