This is the story about how a small blattodean taught me something I did not know about beetles.

While photographing frogs in the Ecuadorian Amazon this past October, I noticed a tiny insect running across the surface of a fallen leaf resting on the forest floor. It had bright colors and looked interesting, so I collected it in hopes to photograph it later. When I finally got to do it, I was struck by its deception. You see, when I initially spotted it I thought it was a beetle. The dome-shaped body and the bright coloration resembled those of some leaf beetle species (family Chrysomelidae), and this insect even moved and walked like a beetle. Nevertheless, a close inspection revealed that its whole body was segmented. This was no beetle. It was a blattodean nymph. 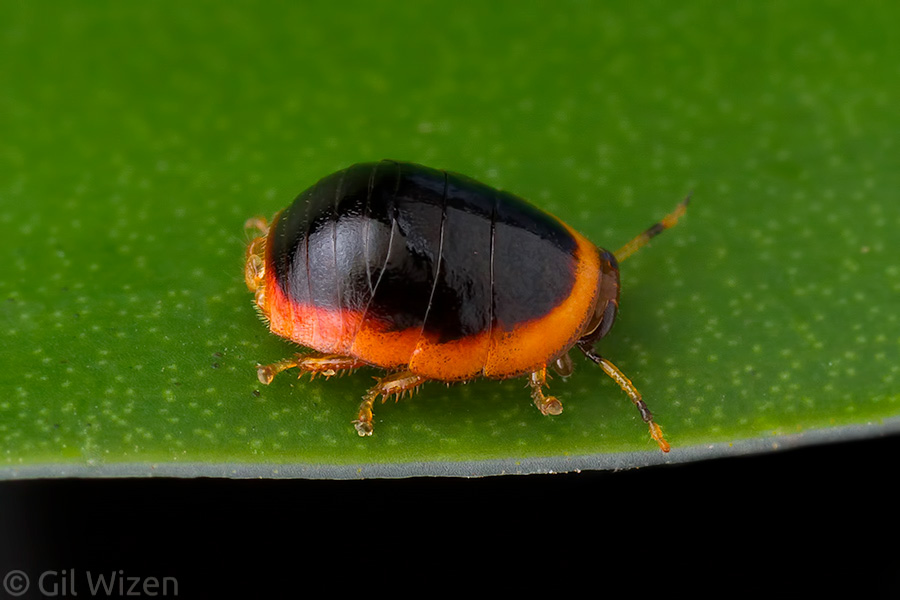 Beetle-mimicking cockroach nymph. What could be the model species?

Blattodeans exhibit some beautiful examples for mimicry, with some species resembling poisonous fireflies and venomous assassin bugs. It should come as no surprise that a blattodean might benefit from looking like a leaf beetle. While many leaf beetles are harmless, some species harbor chemical compounds that make them poisonous or distasteful to predators. Unfortunately, identifying a blattodean from its larval stage is very tricky and close to impossible. I was not able to locate anything that looked like the adult stage of this species. However, when I examined this cute blattodean I remembered that I have seen this color scheme on a leaf beetle before, and after digging in my old photo archive I was able to find the record.

Leaf beetle. Or is it?

I took this photo on one of my first visits to Ecuador, over a decade ago. I did not plan to do anything with the photo, but I thought it was a nice-looking leaf beetle and so I snapped a quick photo for my own records. Only I was completely off. This is not a leaf beetle.

Unlike most of its family members that are elongated and dull-colored, Nilio is a genus of darkling beetles (family Tenebrionidae) that bear a striking resemblance to leaf beetles and ladybugs. This resemblance can fool even experienced entomologists. Darkling beetles are well-known for their chemical defense, secreting odorous chemicals that will deter even the most enthusiastic field entomologist. This can explain the blattodean mimicry shown above.

This is not a leaf beetle but a darkling beetle (Nilio sp.)

After I realized these photos show a species of Nilio, I checked the rest of my photos from the very same trip, and started finding more photos of Nilio species.

Here is a group of larvae on a branch. Nilio larvae are gregarious (live in groups) and feed on epiphytic lichens. If you have ever seen the typical wire-worm larvae of darkling beetles you will understand why I labeled this photo as “chrysomelid larvae” in my archive.

In some species, not only the larvae, but also the adults, are gregarious. Here is a group of adults I found on a tree trunk close to their pupation spot. Like the larvae, these adults were feeding on lichens as well.

A closer look at the Nilio beetles aggregation

As you can see, not all Nilio species have bright coloration as the species shown above. However, even when they are closer to their “darkling roots” they still look more like to members of Chrysomelidae than Tenebrionidae. This all goes to show that even when you are confident about your knowledge of insect taxonomy or biodiversity, nature can still surprise you. I embrace these moments when I am caught unprepared; nothing like learning something new!