Inside a wooden cabin on the outskirts of the peaceful town Mindo, I am standing on my bed, arms spread sideways. My bright headlamp is on at full output, to overcome the cabin’s dim lights. In a few seconds Javier will step in through the door to pick me up for our night hike in the cloud forest. And he will probably want to know what the hell I am doing.
I am trying to find a 5mm-long fly.
Suddenly, I see it. That tiny spec of an insect. Hanging upside down from one of the ceiling boards. I am reaching out for my pocket to grab a vial. The sound of footsteps climbing up the stairs is getting louder and louder. “Gil, are you there?” Great timing. I must keep my focus or that fly will be gone the moment Javier walks in.
-“Don’t open the door!!!!”

Back in 2015 I contacted Paul Bertner regarding a fly that he photographed in Mindo. It was an antlered fly from the genus Richardia. Ever since I learned about these flies in the introduction course to entomology, I have always wanted to see them in the wild. Males have antler-like projections from their eyes, which are used for pushing an opponent during a combat over territory or a mate. The female Richardia lacks those projections, but is characterized by a telescopic ovipositor at the tip of her abdomen, used for injecting eggs into fruits and other plant tissue. Paul was very kind to share his observations with me, wishing me luck in finding them on my next trip to Ecuador. 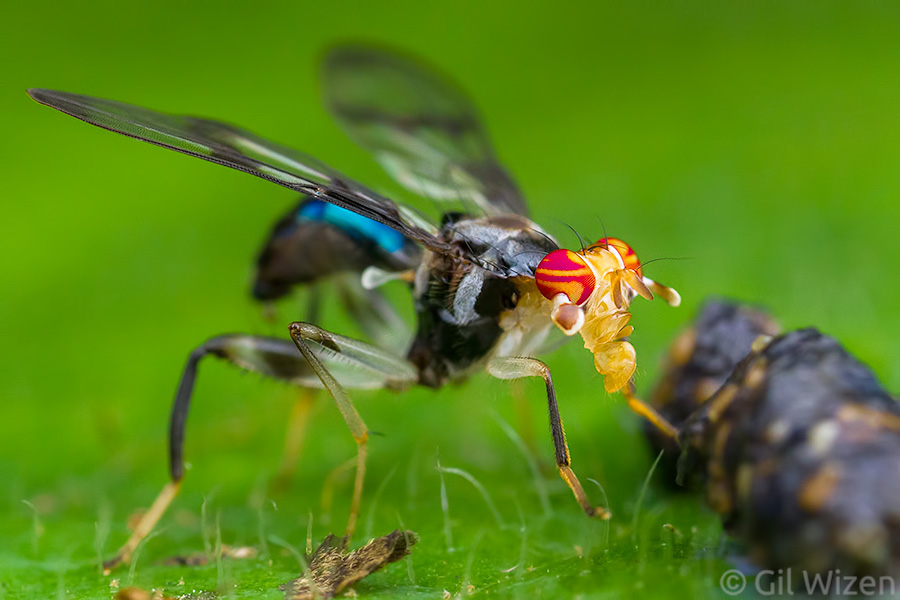 This small-antlered fly (Richardia sp.) is feeding on amphibian feces. Many of these flies are attracted to animals’ droppings, from which they obtain valuable nutrients.

It took time and determination, but I did manage to find the flies eventually. In the brief window that they were active I took some shots, but I was completely unsatisfied with them. It seems that with Richardia, practice makes perfect. Or should I say, masochism makes perfect. You see, these flies are not only active during a very specific time of the day, on the underside of leaves of specific plants, but they are also extremely skittish. Highly territorial, the antlered males respond to any movement in their surroundings, and that includes a person carrying a big black camera. They take off and vanish almost instantly. And then, in hiding, they wait. What for I am not sure, but only a handful of times the males actually returned to their perch under the leaf. Unfortunately, I had to leave the site before I could take any decent photos. So, the following year I came back to the exact spot again. And there they were in all their splendor! I tried again to photograph the flies in their habitat on the leaves, but since they usually sit on the underside it was tricky. I spent hours with them, only to come up with lousy shots. No, I had to be creative with these Richardia.

Richardia flies spend their nights sleeping hidden in folded leaves like this rolled bromeliad leaf. Inside they are protected from many nocturnal predators, such as mantids, ants and spiders.

And so after some thinking I came up with the idea of working at night. The flies are diurnal, in other words they will be less active when it is dark. Or at least that’s what I thought. It was still a very exhausting experience to photograph them (it reminded me of the time I was trying to photograph Sabethes mosquitoes). As I mentioned, Richardia are very responsive and will keep moving and exploring unless they stop to clean themselves up. Every time I had the fly framed and in focus, it would travel to the other side of the leaf. Several times it would escape and I would have to go look for it in the cabin. If you think locating a small flying insect in a messy wooden cabin is easy, think again. I found myself crawling on the furniture and slowly sliding my face against the walls and floors, and when I found the fly eventually I was shocked that I was able to see it at all. I nearly lost my mind trying to photograph it. Will I be defeated by a tiny fly?

After most of the evening time was lost due to the insect’s aforementioned escapes, I decided to come up with another method to control it during the shoot. It required another pair of hands, so I asked my friend Javier Aznar, who I just met in person a couple of days before, to assist. In fact, without Javier’s help I would probably not get any usable shots. I thank him for putting up with me and for keeping my sanity during those difficult hours. “Nothing is impossible”, he told me. He probably thought I was crazy for spending so much time photographing a single fly. Well, it is somewhat true, if you consider the fact that I came back to Mindo just for that purpose. This time, I am very happy with the photos. There will probably be other chances to photograph Richardia flies, but I got precisely what I came for. And it felt like a small victory. 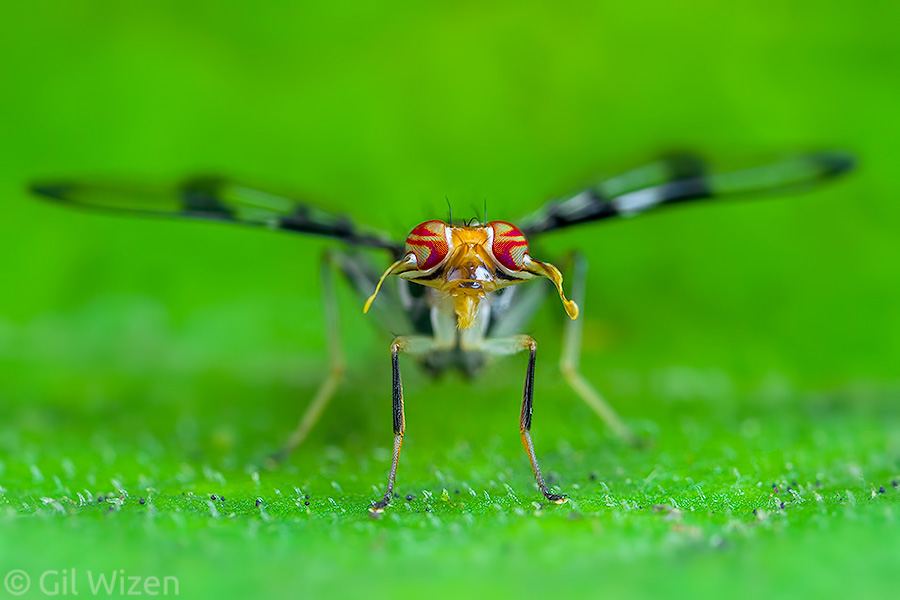 The antlers are thin projections coming out from below the fly’s eyes.

The head of a male antlered fly (Richardia sp.) in all its glory. This is the shot I had in mind!

Not all Richardia species have antlered males, by the way. Some species have no such ornamentation/weaponry at all, yet I still think they are stunning flies with their colorful eyes, decorated wings and shiny bodies. 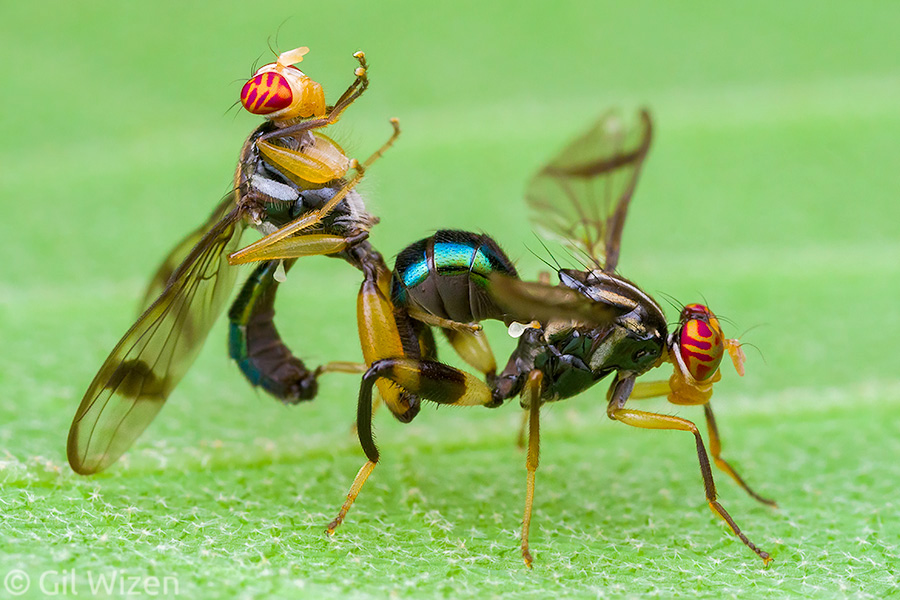 Mating richardid flies. This species is antler-less, but nevertheless they are very beautiful.

Another group of species have had the head morphology evolving in a completely different direction. Instead of having antler-like projections coming from below their eyes, males evolved wide heads. These flies are sometimes called hammerheads, due to their striking resemblance to hammerhead sharks. They are also often mistaken for stalk-eyes flies, however the latter belong to a separate family of flies (Diopsidae, not Richardidae) distributed mainly in tropical regions of Asia and Africa. The hammerhead Richardia can sometimes be seen on the underside of broad leaves such as those of banana and heliconia plants. Males engage in head-pushing tournaments while a single female usually stands by watching and waiting for the winner to approach. He will then display a short dance, running in circles and waving his decorated wings, before mating with her.

Male hammerhead fly (Richardia sp.). This one was scouting out a female on a nearby leaf. 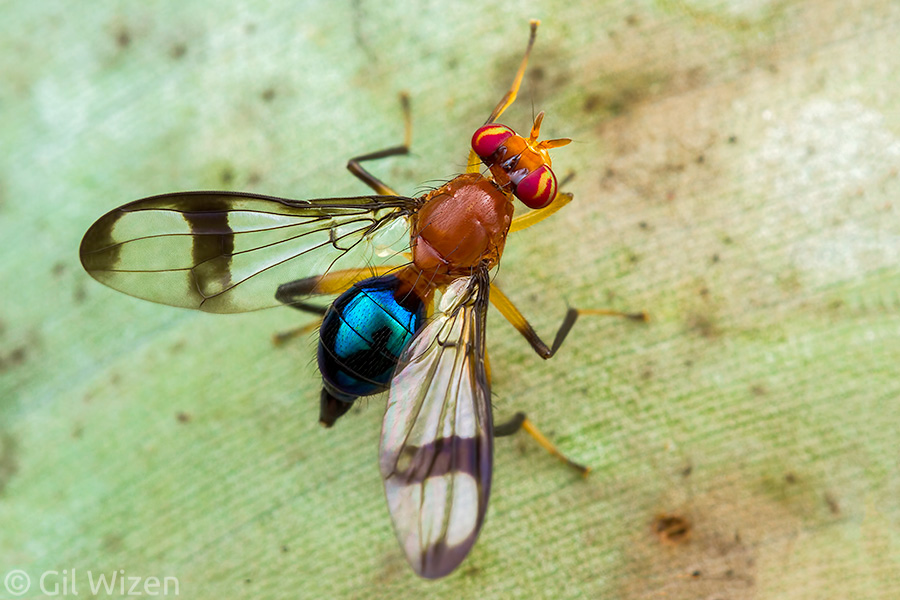 The female hammerhead Richardia has a less pronounced head

If you remember my previous post, Richardia flies are not immune to infections, and they are occasionally found “glued” to the underside of leaves after being killed by an entomophagic parasitic fungus (Ophiocordyceps).

I should mention another fly species, an extreme case of a hammerhead fly. Unlike Richardia, this one belongs to another family, Ulidiidae. Plagiocephalus latifrons is probably the closest neotropical equivalent to the old-world stalk-eyed flies, with a head so wide and so disproportional to the rest of the body that it looks more like someone’s prank than a real living animal. 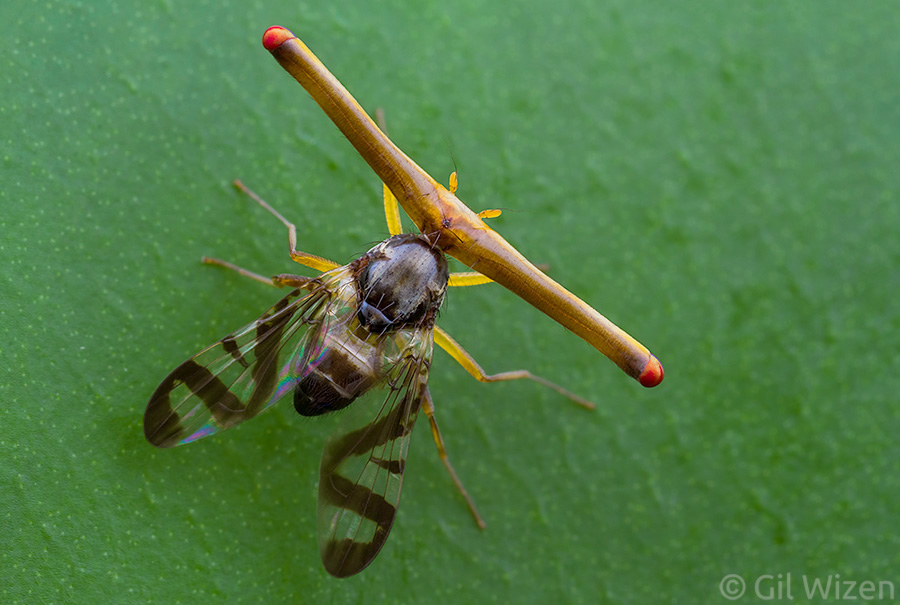 Male hammerhead fly (Plagiocephalus latifrons), dorsal view. One of the most amazing fly species out there in my opinion!

Male hammerhead fly (Plagiocephalus latifrons), frontal view. I cannot imagine this head being very aerodynamic, but you’d be surprised to hear that they are excellent fliers

The eyes are so wide apart on the tips of the head, that it makes me wonder what these flies see. I am also curious as to how these flies look like at the exact moment when they emerge as adults from their puparium. Surely this whole elongated head cannot fit inside the compact oval puparium within the last larval skin, so it must get pumped up and expanded right after the fly’s eclosion (the BBC has a nice video showing this in a stalk-eyed fly). I would love to see this process in person one day – there is still so much to discover!

4 thoughts on “Photographing Richardia – a long way to victory”