What if I told you that right under your nose there is an entire group of arachnids that hardly ever receives any attention? It contains many species and has a worldwide distribution, but you will not hear about them in the news or see them presented on mainstream media. A couple of months ago I gave a talk about minor arachnid orders (any arachnid that is not a spider, scorpion, mite or tick) at Nerd Nite Toronto, and while doing so it suddenly occurred to me that I have never written about shorttailed whip scorpions, or schizomids, on this blog. This is surprising, because it has been six years since I have encountered them in Belize, and I have been keeping a live captive colony of them all this time.

Members of order Schizomida are tiny soft-bodied arachnids that inhabit the top layer of soil in caves and under rocks. Some of them also live inside decomposing wood, and several species are myrmecophile, living in ant nests. In these humid habitats they actively search for their prey – tinier invertebrates. In fact we are not really sure what schizomids feed on in the wild, but records show that they will gladly take down Isopods, springtails, mites and other small arthropods. At first glance they look like a sac spider crawling on the ground. However, a closer inspection reveals that their body proportions are different from those of spiders.

Shorttailed whip scorpion (Belicenochrus pentalatus), a representative of the small arachnid order Schizomida. This species is found in rainforest habitat.

Their name comes from the structure of the cephalothorax, which is split into several plates unlike in any other arachnid. Schizomids also have no eyes, which means their perception of the world is mostly tactile- and chemical-based. Their front pair of legs evolved into a sensory organ that can smell and taste as well as provide information on what is lying in front of the arachnid. These legs are called antenniform legs and they are very similar to those found in other arachnids, like whip spiders, vinegaroons, palpigrades, and even some mites, all of which walk on six legs only. The schizomid pedipalps are sturdy and built for grabbing, assisting in prey capture. Interestingly, their hind legs are modified and look very similar to those of crickets, and indeed it is reported that some species can jump to safety when threatened.

Schizomids look like a strange spider with grabby hands and cricket legs!

The thick setae on the schizomid pedipalps are used for sensing as well as a catching basket for prey.

The schizomid fang-like mouthparts (chelicerae) are found under the pedipalps

Another important character of schizomids is their short tail or flagellum (as opposed to the long flagellum in other tailed arachnids like vinegaroons and palpigrades). The tail is used for sensing but in males it has a unique structure, and it is possible that it plays a role in courtship or mating. In fact male tails are so different from species to species, that they are often used as an identification character in taxonomy.

The Schizomida order contains about 350 species globally, with new species still being discovered. There are two existing families; Most of the known species belong to Hubbardiidae, while some Southern North American species comprise the smaller family Protoschizomidae. As a group they are closely related to the vinegaroons (or whip scorpions), and might even share some of their chemical defense against predators – there are reports of at least two species secreting odorous compounds when disturbed.

I encountered schizomids during Bugshot Belize in 2013. Piotr Naskrecki noted that the caves in the area are home to a species of ricinulei (another fascinating group of arachnids that are on my bucket list) and we should keep our eyes open. So I did. Already in the first few meters into the Footprint Cave I found a new species of whip spider, that I would later describe and name Charinus reddelli. But I also found a small arachnid that I have never seen before. Since I have seen very few ricinulei in my life I asked Piotr if this was one. “No” he replied, “but this is something just as good”. It was Belicenochrus peckorum, one of two species of schizomids found in Belize. Later, while dissecting a decomposing log, I found the other species B. pentalatus, which is a little smaller. The latter is the species I am currently keeping in captivity, and it has been fascinating to observe and learn from.

One of the surprising things about schizomids is their reproduction. When conditions are favorable, they reproduce sexually like most animals. However, in times of stress and when males are scarce, females can switch on an asexual reproductive mode and lay fertilized eggs that will hatch into clones of the mother. This is very similar to other arthropods like stick insects and aphids, but quite unusual for arachnids. This type of reproduction is called facultative parthenogenesis. In the Belizean species I have been keeping, males were never present. In fact I remember coming home with only one live female, and this female give birth to the entire colony.

Shorttailed whip scorpion (Belicenochrus pentalatus), possibly a gravid female. Being small does not make them immune to parasites – this one is carrying a few mites.

Similarly to whip spiders and vinegaroons, the females lay their eggs in a sac that they carry until the babies hatch. In small species like B. pentalatus the sac contains only 5-6 eggs, but the eggs are relatively large, which means the hatching babies are born at a size that allows them to hunt small arthropods. Once hatched, the babies climb on the mother’s back and stay there for two weeks before dropping off and starting their independent lives. Brooding females are very skittish; they will drop the babies at any disturbance. 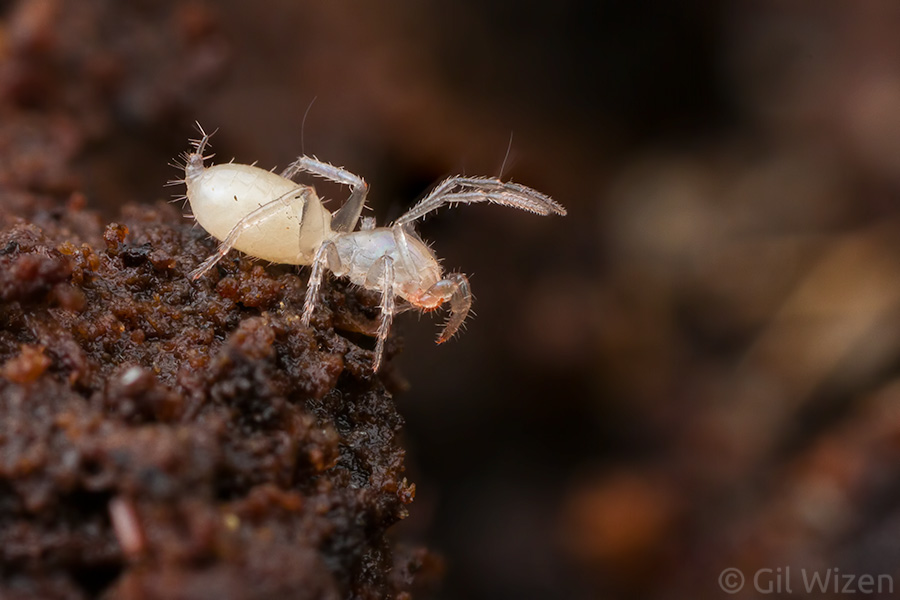 A baby shorttailed whip scorpion (Belicenochrus pentalatus). Believe it or not, this animal is only 1mm long.

A juvenile shorttailed whip scorpion (Belicenochrus pentalatus) fresh after molting. The green abdomen is only temporary; it takes a few hours for the yellow-brown pigments to set in.

One of my memories from the encounter with B. peckorum in Belize was a photo session in which Piotr and I were taking turns trying to photograph one of the males. After a good 30mins of chasing the animal at a close distance with the lens, Piotr looked at me frustrated and said it’s impossible. If you follow my posts here then you know that nothing is really impossible when it comes to photography if you are willing to invest the time in it, but I understood him completely. Schizomids are some of the most active arachnids out there, especially if they are exposed (as would be the case when photographing them). Very rarely have I seen them stop to rest. Add their minute size to this equation, and it becomes clear why photographing them can be extremely unrewarding. However with patience and perseverance, you can come up with some decent shots. I hope to encounter more species of schizomids in the future, with their wide distribution there is so much to discover.

One thought on “Schizomids, the unstoppable arachnids”