I usually don’t keep lists of “must-see” things when going on trips overseas, because past experiences have taught me that the best discoveries come when you least expect them. However, I must confess that I broke my rule before I taking the flight to New Zealand, and I decided that there are three NZ native animals I would like to see in the wild. The first one was undoubtedly the tusked weta.

Tusked weta belong to family Anostostomatidae. These creatures look like they were designed by Hollywood film industry (and yes, I can’t believe I am saying this about an insect): Males posses curved elephant-like tusks that extend forward from their mandibles. The tusks are used to push a male opponent during fighting over females or territories. The females have standard mandibles and do no have protruding tusks.

There are three species of tusked weta in New Zealand:

The Mercury Island tusked weta, Motuweta isolata, is the biggest species of the tusked weta group, with a body length of 80-100mm and a weight of up to 28g. They are extremely rare and have a limited distribution in Middle Island in the Mercury Islands group. Like other native NZ invertebrates, human-introduced rodents are the greatest threat to these insects. The Mercury Island tusked weta is a protected species and a captive breeding and reintroduction program was developed by Department of Conservation in order to introduce this species into other islands in the Mercury group. The Northland tusked weta, Anisoura nicobarica, was once considered a species of ground weta because of its small size (up to 20mm long). It is relatively common throught its distribution range in the far north of New Zealand North Island, occupying cavities in trees similarly to tree weta.

The third species and the one I was after is the Raukumara tusked weta, Motuweta riparia, a moderate-sized weta in comparison to the other two species, with a body length of 30-40mm. It was the most recent one to be discovered, only in 1996. It is found along the banks of forested, slow-flowing streams in Raukumara Range, East Cape of the North Island.

Tusked weta are nocturnal. During the day they hide under stones in a wide chamber made from silt. The juvenile weta are very common in the habitat and can be easily found even during the day while resting in their burrows. However, the tusks are fully developed only in adult weta, and they are much harder to find by day (although not impossible). They appear to prefer to come out on dark moonless nights when conditions are moist and humid, and climb on the vegetation. Because of their small body size and lack of tusks, the juvenile tusked weta can easily be mistaken for ground weta. However, small morphological differences give them away – mainly the number of spines on the legs but a more useful character is the presence of tympani (the insect equivalent of ears) on the forelegs. These “ears” are missing on the forelegs of ground weta. 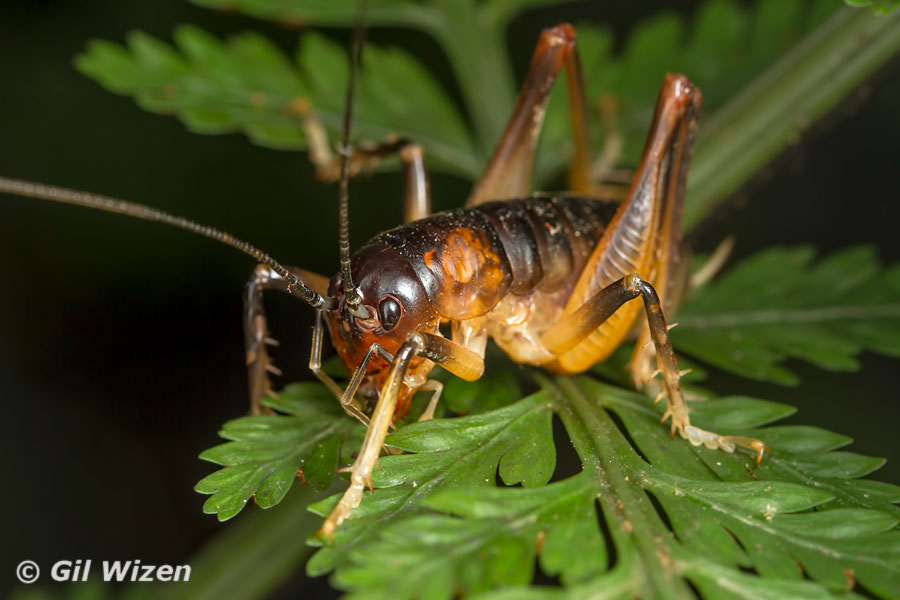 The adults seem to spend more time on branches and on the ground than on leaves in comparison to the juveniles. Interestingly, there is variation in the length of tusks in males, and “minor” adult males can also be found. These weta are mainly carnivorous, feeding on worms and insects. They are long lived, completing their development from juvenile to adult in two-three years. When disturbed, they immediately jump into the water and after swimming a short distance they press their body against the rocky bottom of the stream. Under running water, they are practically invisible for predators. The weta can stay in this state, completely submerged, for several minutes, after which they poke their heads and first thoracic segment out of the water, trying to assess if the danger has passed. I loved watching them swimming in the water, however it is not the safest place for escaping predators: one of the females I photographed decided to walk towards a small waterfall and vanished between the rocks. After a split second I heard a slurping sound and saw her crawling back up. An eel was lurking in the water below and tried to grab the weta!

Photographically speaking, the tusked weta are insects that you love to hate. At night, they usually stand in the most awkward angles and will not move (unless you want to try to make them move and risk the diving of your beautiful weta). By day, they just never stop running, and their dark shaded habitat makes it unusually challenging to capture a crisp photo. I was lucky to have a piece of white paper lying around to use as a background. All in all, I am very glad I saw these marvelous insects, shaped by years of natural and sexual selection. They truly are a wonder of nature.