One of the creatures I wanted to find during my visits to Israel is a big crustacean, found only in temporary ponds during a specific time of the year. In previous years I was unlucky to find it – I visited in the late spring and early summer, and most of the rain-pools were already gone or in the process of drying out.

But this year I planned my trip way ahead, making sure to save some time for searching these animals.

Tadpole shrimps belong to the small order Notostraca, which contains a single family, Triopsidae, with only two genera: Triops and Lepidurus. These animals are considered living fossils, having not changed significantly in appearance since the Triassic period, about 200 million years ago. They also bear a strong resemblance to horseshoe crabs, characterized by a broad, shield-like carapace, which conceals the head and bears three eyes, a pair of compound eyes and a nauplius eye between them. The abdomen is long, and ends in two caudal filaments. But in my opinion, the real wonder about tadpole shrimps is their large size. Some species can reach a whopping length of 10cm, larger than most insects and amphibian tadpoles co-habiting in the same pond. And indeed, many people I met while surveying rain-pools could not believe that this was a crustacean until I pulled one out of the water.

Temporary ponds like this one are home to various aquatic invertebrates such as the tadpole shrimps. Unfortunately, these habitat are threatened with destruction in Israel. Here a low wooden fence is the only physical barrier between this small nature reserve and a sand quarry found behind the pond.

There are two species of tadpole shrimps in Israel. The bigger one, Lepidurus apus, is relatively common and can be found in many ponds along the coastal plain from winter to the early spring. It is easy to recognize – not only is it big and brightly colored with red and olive-green, but it also sports a wide transparent scale at the end of its body, between the two caudal filaments.

The second, smaller species, Triops cancriformis, is much more scarce, and in fact is known only from a handful of ponds. This species is critically endangered in Israel due to habitat destruction, however it was recently recorded from a new location, a water reservoir in the Arava desert, the southernmost point in its distribution to date. A little less colorful than its close relative, it is mottled with green and grey splotches that assist in blending in with its surroundings.

Tadpole shrimp (Triops cancriformis) digging in the sediment. The green and grey splotches make excellent camouflage for concealing it from predators striking from above, such as water birds.

A side view of a tadpole shrimp (Triops cancriformis) revealing eleven pairs of legs. The first pair is long and modified to function as a sensory organ.

Both species are omnivores, living on the bottom of the pond while relentlessly digging in the sediment searching for food. Occasionally they are seen swimming close to the water surface, especially in shallow parts of the pond, where they are usually mistaken for amphibian tadpoles, hence their common name.
But the most fascinating fact about the life cycle of tadpole shrimps is that similarly to other aquatic invertebrates they too must face the inevitable faith of the temporary pond: drying out. For them, it is a race against time; they must grow fast, mate and lay their eggs before the pond disappears completely, killing every one of them in the process. Once the pond fills up in the winter, the tadpole shrimps hatch from their eggs, and grow at an impressive pace, reaching their adult stage in just a few weeks. Then, they reproduce, but the context of reproduction depends on the population. In some ponds tadpole shrimps reproduce sexually, but in many populations the males are absent, and the females reproduce asexually, in a process called parthenogenesis. They release unique, long-lasting eggs that can stay dormant for many years, buried in the dry soil. This way, they can “skip” several years of drought, during which ponds have tendency of evaporating too fast. When there is sufficient precipitation and the pond fills again with rainwater, some of these eggs hatch (others stay in further dormancy for the following years), and the cycle starts again.
I was very happy to find these lively creatures in my last visit to Israel and could not resist taking some photos of them for Meet Your Neighbours project. 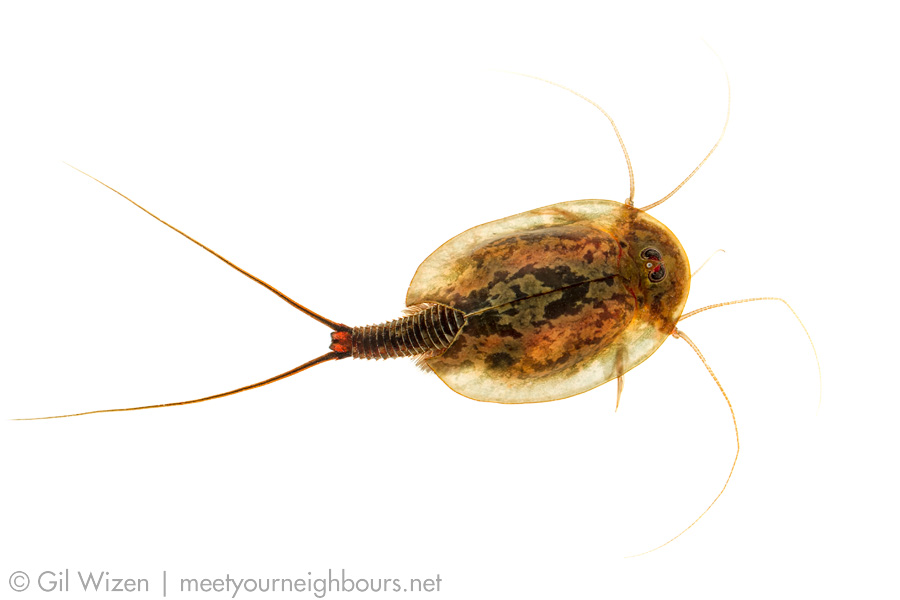 Tadpole shrimp (Triops cancriformis) from central Israel. The shield-like carapace gives it the appearance of a small horseshoe crab.

4 thoughts on “The incredible tadpole shrimps”