Last week I posted about Dielocroce hebraea, a species of threadwing antlion found in Israel. The article got a huge positive response and I am more than grateful for that, but I wouldn’t do these mystical insects justice without mentioning the second subfamily of Nemopteridae – the spoonwings (Nemopterinae).

Spoonwings share a close resemblance to threadwing antlions in appearance. They too have extremely long hindwings, but in their case the base of wings is narrow and as these extend further away from the insect’s body they become wider, sometimes bearing several lobes marked in black and white. Some species (members of genus Nemoptera) have similarly decorated forewings, and overall the wings are somewhat iridescent.

Contrary to the cryptic threadwing antlions, the spoonwing adults occur in open sunny places, such as grasslands and meadows. These are showy insects that fly by day, visiting flowers in search for their food – nectar and pollen. They are very fond of Apiaceae flowers, and occasionally several adults can be seen crowding and feeding on the same inflorescence. When they do take off they fly clumsily, slowly bouncing up and down in the air. It is quite difficult to tell which insect they are while in mid-air, but once they land it becomes very clear.

Surprisingly, larvae of Nemopterinae are poorly known. Sightings of live larvae are unheard of and most likely there are zero photographs of them out there. We know close to nothing about the life history of these majestic insects. Their eggs are laid on the ground surface, and the hatching larvae quickly burrow into the soil. Unlike the giraffe-larvae of threadwing antlions, they are robust and do not have a long neck. There are several speculations as to where they continue their development and what they feed on. In a paper published in 1995, Monserrat and Martinez described how ants harvest the eggs and young larvae, suggesting that the larvae are myrmecophilous (associated with and living inside ant nests). A few years later Popov (2002) showed that the larvae reject a large variety of arthropod prey, supporting the hypothesis that they are specialists in their diet.

Israel is home to three beautiful species of spoonwings. The most common one is Nemoptera aegyptiaca, which can be observed in activity in late spring. Like most species in the genus Nemoptera, adults can be easily recognized by their decorated forewings. It is hard to describe what it is like seeing them in real life. Cute. I think this is the right word.

Something interesting I noticed about adult spoonwings is that the hindwings are sometimes twisted like corkscrews. I believe this is an artifact caused when they are spreading the wings after emergence from the cocoon. It gives these insects character.

For years I accepted the fact that I may never get to see the other spoonwing species in Israel. I just believed that a lot of luck is involved in finding them, something like being in the right place at the right time. And this is partially true, as I learned a couple of years ago. I visited a site in the Golan Heights (northern Israel), looking for predatory katydids. I arrived very early in the morning, because it is easier to photograph insects during these hours. As the sun came up across the pink sky, I suddenly realized that I am witnessing a mass emergence event of spoonwings. However they were not N. aegyptiaca but Lertha palmonii, a much more delicate and obscure species. Adults were climbing on the dry grasses in dozens, some of them were still in the process of spreading their curled wings. Within minutes they took to the air, flapping their tiny wings and bouncing around me like small birds of paradise. It truly was a magical moment. 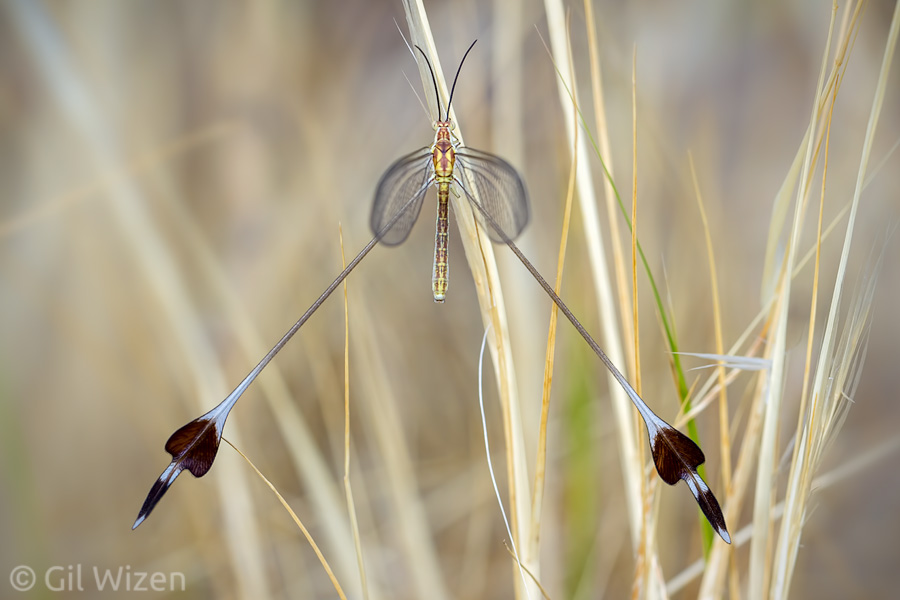 The third Israeli species, which goes by the poetic name of Halter halteratus, seems to be very rare in Israel and more common in North Africa. In fact, the majority of spoonwing species occur in Africa, where some impressively large species can be found.

Still not impressed? Check out this Australian species, Chasmoptera huttii, which I nickname “the dragon spoonwing”. If you do not think this insect looks amazing then I have absolutely no idea what you are doing on this website…

This photo gives a nice sense of scale:

You can see more nice photos of this species here, here and here. These photographs were taken by Jean and Fred Hort in Western Australia, who were kind enough to let me post them here. Their gallery is an impressive collection of flora and fauna from that region, and they have a very keen eye for unique arthropods. I found myself drooling over their beautiful photographs and strongly recommend checking out their flickr photostream.

UPDATE (10 Dec, 2015): Handré Basson photographed another amazing species of spoonwing in South Africa – Palmipenna aeoleoptera. He is a naturalist with a very good eye for finding interesting arthropods, and he shares his beautiful photographs on his Facebook page. I thank him for giving me permission to show his photos.

UPDATE (2 May, 2018): Torsten Dikow brought to my attention that the unique hindwings might have a role in avoiding predators. A study conducted on the species above (Palmipenna aeoleoptera) showed that intact hindwings deterred attacks from small robber fly species, possibly by making the spoonwing appear larger.

One of the first things I did right after launching my “Meet Your Neighbours” gallery was to ask people which photo draws their attention the most while scrolling down the page. Responses varied, but one in particular was quite dominant: “violin larva”.
The name “violin larva” is not official, but it does great service to describe the insect in question – larva of the threadwing antlion (Dielocroce hebraea). Ever since I read Piotr Naskrecki’s post about these insects I knew I was going to write a post about their larvae. I feel like this is a classic insect one get to see when taking an Entomology course in Israel, but outside the Middle East and Africa not too many people are familiar with them.

Threadwing antlions are interesting animals. They belong to family Nemopteridae, and they are unmistakable in appearance – adults have extremely long hindwings, like thin threads or ribbons, giving the insect its name and the appearance of a delicate fairy when it is in mid-flight. Their larvae are also quite unique for having an extended prothorax (long neck), unlike the bulky larva characterizing the other neuropteran families. Nemopteridae contains two subfamilies: Nemopterinae (spoonwings), in which the day-active adults have wide, ribbon-like hindwings, and the strictly-nocturnal Crocinae (threadwings), containing adults with narrow, thread-like hindwings.

Members of subfamily Crocinae have a narrow habitat preference. They are found in arid desert zones and prefer caves or rock shelves sheltering thick dust patches of fine clay. The larvae are ground dwellers, taking advantage of the fine clay for camouflage. They are voracious predators, using their sickle-shape mouthparts to inject venom into their prey in order to paralyze it. They are characterized by a relatively long neck, almost a half of their total body length. The neck may look like a strange adaptation for life on the cave’s floor, but has several functions.

These giraffe-like larvae are sit and wait predators that hide under the fine sand in ambush for passing insects. Here is a video showing the predation of a silverfish by the threadwing larva. See if you can spot where the larva is located before it pounces on its prey:

After watching the video it becomes clear that the long neck may assist in protection from a struggling prey that can damage the larva’s soft abdomen. The variety of arthropods that these larvae feed on include venomous assassin bugs and spiders. But how do the larvae hide themselves so well in the sand? Watch a short timelapse of the process:

The neck also comes in handy when the larva buries itself in the soil. Notice how the larva first checks the area with its head to make sure it is not taken by another already-hidden larva. If the larva’s abdomen is bitten during burrowing by another larva, this can be fatal. The sight of larvae fighting over a spot for burrowing is common, suggesting that they are somewhat territorial, therefore they try to avoid conflict by examining the area before burrowing.

Development of the threadwing larvae is slow, and larvae can spend up to two years living in the fine sand of the cave. Once they complete their development they construct a tiny spherical cocoon from sand grains glued with silk, in which they pupate.

The curled hindwings of the pupa somehow remind me of a butterfly’s proboscis (only there are two, and they are curled backwards). The head bares two “horns” that assist in puncturing a hole in the cocoon, allowing the adult to emerge to the outside world.

Threadwing antlion (Dielocroce hebraea) emerging from its cocoon. The erected “horns” in the mouthparts area are used to burst through the cocoon.

Adult threadwings have elongated heads, with the ventral part extended backwards giving it the appearance of a duck’s bill (some people refer to them as duck-faced antlions, I suggest the name duck-faced fairies though). They rarely feed as adults, although they are sometimes seen drinking dew. Threadwing antlions often rest on spider web found on the cave’s ceiling. It is unclear how they avoid getting tangled by the web. They are so lightweight that they do not apply too much pressure on the silk and thus can rest even on loose strands.

Finding threadwings in the wild is not an easy task. You must first find the right type of habitat, and even then nothing guarantees their presence. While I cannot say these insects are common, it is always a treat to stumble upon them. To me they are the closest thing to legendary fairies, hiding a dark secret of their early life as little giraffe monsters.