When people talk about nasty frog secretions the conversation usually shifts very quickly to poison arrow frogs and their toxins. And it is not surprising – these tiny frogs host some of the deadliest compounds in the natural world, some so toxic that they are even lethal to the touch. But the truth is many amphibians have skin secretions, and not all of them are meant to be deadly. One group of treefrogs in particular made a name for itself due to their skin secretions – the milk frogs (genus Trachycephalus).

I encountered one of these treefrogs earlier this year when I returned from a night hike in the Amazon rainforest of Ecuador. Walking and climbing for hours made me exhausted, and the only thing I could think of was crashing into the bed and getting a few hours of sleep. Suddenly I heard Andy, one of the staff members from the reserve, calling from the shower. I remember thinking to myself ‘It is 2am, what on earth is he doing in the shower?’
I got up and clumsily walked towards the shower where I found Andy pointing at a big blob completely covering the showerhead. He did say “rana” which means frog in Spanish, so I reached out my hand to grab it. Big mistake.

At that time I knew about milk frogs only from the pet trade. The species Trachycephalus resinifictrix is a very popular pet because of its colors and docile temper. I had no idea why members of this genus are called milk frogs, or how they behave in the wild. And so I learned the hard way, that milk frogs are named after their thick, sticky skin secretion. Within seconds of grabbing this giant amphibian my hands were tangled in a gooey mess of what looked and felt like carpenter’s glue. This defensive secretion has very interesting properties – it sticks to anything touching the frog, but in contact with the amphibian’s skin it becomes extremely slimy and slippery, allowing the frog to escape from its captor. Trying to wash it off with water only makes things worse (i.e. thicker and stickier), as it is not water-soluble. I looked for information about the chemical attributes of this substance, but came up with nothing. The only description I found for it was “caustic” (alkaline), and that it seems to be poisonous too.

I know what some of you are thinking – where are the photos of the frog in your messy hands? Trust me when I say this, it is impossible to do anything while dealing with this gluey secretion, let alone operating a camera. I spent an hour and half in the bathroom sink obsessively trying to get rid of the stuff. Unless you have something to scrape your hands with, this is not a simple task. Eventually, I managed to somewhat clean my hands, and decided to keep the frog for a short photography session.

“Now be a good girl and behave.”

The species I found was the common milk frog (Trachycephalus venulosus), and it is massive. When we think of treefrogs we tend to fixate on those small or medium sized species, usually green or yellowish in color, often delicate in their appearance to allow swift movement in the forest canopy. However, some species are impressively robust, so much that when they leap and land on a branch they sometimes break it under their body weight. This is the case for the milk frog, I could not believe my eyes how big it was. Females can reach a length of over 10cm and have a body mass of over 90gr. They are indeed heavy jumpers, and they deploy an interesting strategy during landing to better support their body weight: the frog either lands on its abdomen or performs a cartwheel around the branch, while only attached by their adhesive toe pads. Trachycephalus venulosus is an explosive breeder, coming down the canopy to breed after heavy rains. Males congregate around water ponds and wrestle for females. It is often a violent event, after which males and females move together in amplexus (males “piggyback riding” the females) to lay eggs on the water surface. 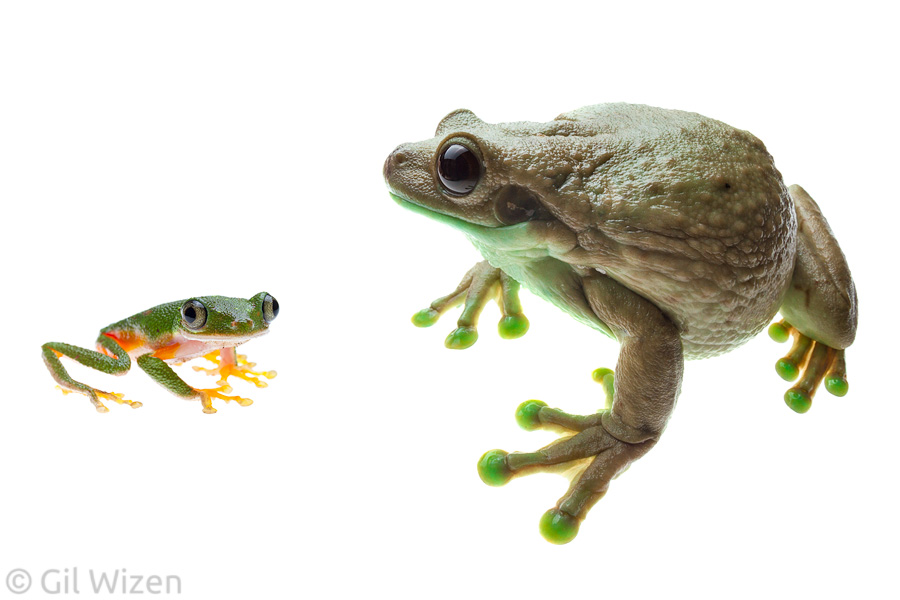 After I got the frog’s sticky glue off my hands along with some of my own skin, I went back to bed. The frog was chilling out in a bucket beside me. In the following morning, I decided to photograph it in “Meet Your Neighbours” style before letting it go. I soon found out that if one is careful, the milk frog can be handled without triggering the defense response. When calm this frog is rather sweet actually, I think I can even see a smile in some of those photos ha ha. I released it back into the forest, putting it on a low tree branch. To my surprise it did not escape immediately. Only when I turned around and started walking away I heard a cracking sound followed by something crashing into leaves. Yup, that’s one heavy treefrog.

3 thoughts on “Trachycephalus – that treefrog you shouldn’t touch”