One of the things I intend to write about every once in a while is the use of insects in art or popular culture. I am still not sure if these will be independent posts or inserts within other posts. I thought I would start by talking about keeping insects as pets or insects drawn in Japanese manga and anime, but this week while walking atop one of the hills at Otago Peninsula, New Zealand, I was inspired to write about something more personal.

When I was 10, I used to collect stamps. This hobby was largely encouraged by my grandfather, who was a serious stamp collector. I remember how just by looking in his albums at stamps from all over the world I sometimes imagined myself drifting away to a far away places. I could stare at them forever, and I also enjoyed the smell of old paper. Despite my grandfather attempts to infect me with his obsession, collecting any stamp from just about anywhere in the world was not very interesting for me. I decided to collect stamps of animals and plants only, but my favorite ones were insect-themed stamps, and I had many of them.
Among the first stamps I got were two that I found especially peculiar. They depicted butterflies and came from New Zealand. I remember them very well – they were probably very common because I had dozens of them. But the reason I was intrigued by them is because something about the butterflies looked a bit off. I knew that one of them looked like Vanessa atalanta in a way (I was able to read English at the time, but I did not know what a red admiral is), the wing pattern seemed wrong though, especially for the hind wings. And the art looked, well, a bit like cubism.

This week, over 20 years later, I got my answer.
While I was starting to make my way down hill, I caught a glimpse of some bright red color from a nearby gorse bush. I went closer, and the butterfly took off. Still, it did look like a red admiral during flight, and knowing the territorial nature of this species, I decided to wait. And lo and behold, a few seconds later the butterfly returned to the exact same spot, only this time it landed on a rock.

Now I could take a good look at it. Yes, definitely the same butterfly from the stamp, and the wing pattern fits perfectly. New Zealand red admiral, Vanessa gonerilla. Obviously this is a different species from V. atalanta that occurs in Europe and North America, but the similarity between the two species is striking, both in upper and lower sides of the wings.

While the upper side has the same type of contrasty combination of aposematic coloration – black, white and red (probably to deter predators), the lower side is an explosion of colors (especially in V. gonerilla), and is used mainly for camouflage.

Vanessa gonerilla, detail of lower side. Click for full size.

The red admirals belong to the butterfly family Nymphalidae, and it is a good opportunity to mention that members of this family look like they have four legs only (instead of six legs like all other insects. See photos above). But a close inspection reveals that the adult butterflies do have six legs. The forelegs are shortened and hairy, and held close to the body. They are used for cleaning the butterfly’s antennae from pollen and sometimes even for tasting nectar. 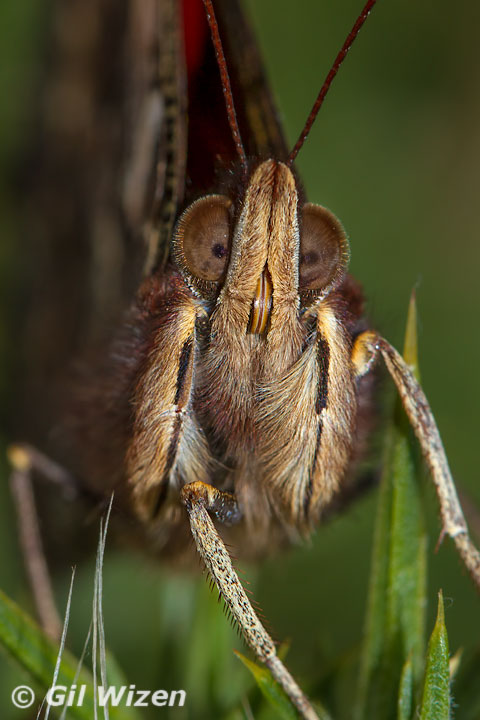 Portrait of Vanessa gonerilla, showing the specialized forelegs for cleaning antennae. They also have hairy eyes, how cute!

By the way, similarly to the European and North American red admiral, the caterpillars of the New Zealand red admiral feed on nettle. The endemic nettle, Urtica ferox, also known as ongaonga, is a large stiff bush (can reach a few meters in height), covered with large stinging spines that remind me of the NYC skyline. I hear these plants are something you want to avoid at all cost, and they sound as bad as the nasty Urtica pilulifera I know from Israel. There was even one case of death caused by this plant (a similar event is reported here).

Urtica ferox (ongaonga). Insert: I see a row of Chrysler Buildings, I don’t know about you.

By the way, I also got to see the tussock butterfly depicted in the second stamp during my first visit to Otago Peninsula a month ago. They were very abundant, flying slowly between the grasses. Unfortunately, by the time I arrived to the site the second time, they were all gone. It was nice to revive a piece of my childhood while visiting a foreign country many years later. Sometimes you have to go halfway around the world to come full circle.