Several articles about Epomis that have been published over the last few months triggered an increase in public interest and the beetles’ popularity, followed by an avalanche of requests for image use from magazines and news agencies. I should be happy about this, if not for the small fact that most of these requests are for free or discounted images. I avoid mentioning anything about pricing for my photos here on the website. It is not that they are not for sale, on the contrary. My pricing is pretty standard for a wildlife photographer these days, and I even dare say it is competitive compared to stock agencies and other photographers’ rates. At this moment, I prefer to handle licensing requests on a case-to-case basis. I know that at some point, maybe when more people show interest, I will set up an e-commerce website offering prints.

That being said, I take the aspect of rarity into account when calculating my pricing. If my photograph shows a rare event, an unusual phenomenon or something other photographers are less likely to capture, I charge a higher rate. I admit that as of now I only have a handful of such photos, and as you might expect, some photos of Epomis beetles fall under this category. Case in point: 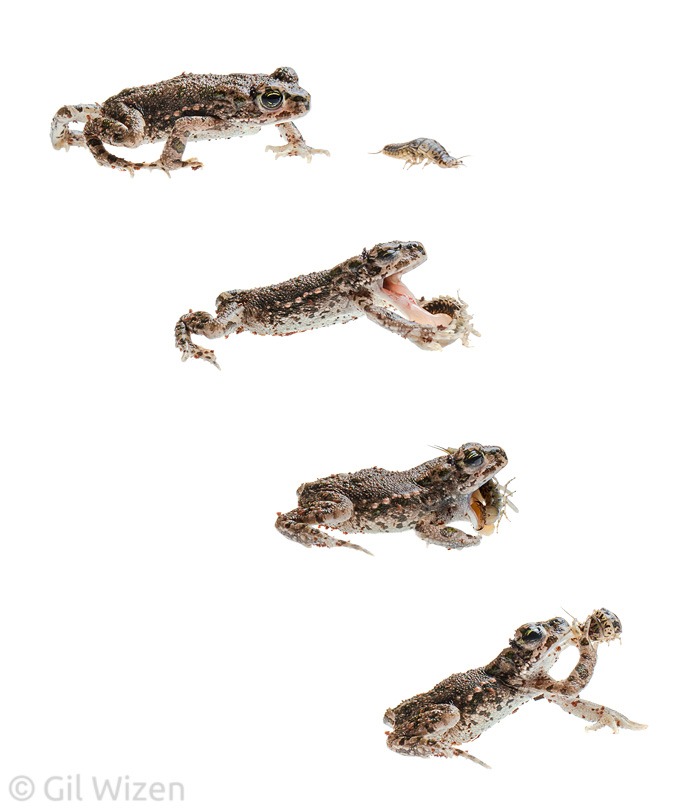 European green toad (Pseudepidalea viridis) being lured to hunt and getting attacked by a larva of Epomis dejeani. Several news agencies, while completely ignoring my pricing, requested to license this photo for what I can only call – pennies.

Why do I rate these photos differently from the rest of my portfolio? Wouldn’t it be wiser to charge the same rate for each image? Pricing photographs is a bit of a controversial topic. While I will not go into pricing standards, many pro photographers agree that there is nothing more insulting than receiving requests from commercial entities for free images. Some of us already have our photos spreading through the internet after being stolen (Click here for an example. Unfortunately for me I was too late to stop this one from spreading). On the other end of the spectrum there are photographers who are happy to give photos away for a simple credit mention. I try not to judge, but I honestly cannot understand this approach. There is a lot involved financially when one decides to pursue professional photography. I love this analysis by John Mueller:

OK, maybe this is a little too extreme. If I took this approach to calculate the rate for my Epomis photo, including gear and traveling costs (this photo was taken in Israel after my relocation to Canada, so there was quite a bit of traveling involved) it would easily reach over $10K. Instead, let’s keep it simple, and I will include just one aspect that is frequently missed when reviewing photographs – time.

To most people, a photo is merely a click of a button. A perfect moment captured in time. However, I hold a slightly different opinion, which I expressed briefly in this post. You see, it took me two years to take the above photo. And I am saying this while omitting the +5 years I have been studying Epomis beetles, which gave me excellent insights on where and when to find them in the field. Knowing your subject is the key to getting good shots in the wildlife photography genre, yet it still took me another two years to get the shot. Why? This is where photographic technique comes into play. I planned this shot in my mind way before I traveled back to Israel to search for my subjects. I had to know exactly where to position and how to diffuse my lights, which moment to press the shutter, and for months I perfected my technique so that when I get to that decisive moment, in which I have only a split second to record the predation interaction, it would go as smooth as possible. And you know what? Even after all this planning it still took a few attempts to get the sequence the way I wanted it.

To summarize this rant, my hard-earned knowledge and level of expertise are not up for grabs. Definitely not at a discounted rate. Oh yes, this particular photo also consists of four different exposures. Maybe I should have mentioned this as well.

UPDATE (11 Mar, 2016): In the last 24 hours this post received a lot of attention, sparking an interesting discussion on FaceBook. After reading some of the comments, I want to clarify a few things:

* The pricing calculation that appears in quotes is NOT my pricing. I only brought it as an example to show the level of financial investment for the professional photographer. If you read on, you learn that I am more realistic and do not price my photos this way.

* I know I made it sound like I never allow to use my photos free of charge but I assure you this is not the case. For most personal use, in-class educational use and scientific presentations I do not charge a fee. Other non-profit use is evaluated on a case-to-case basis, but I am very flexible in my terms. If I supply high quality photos I expect to receive something equal in return, it does not have to be currency; in the past I received books, gift cards, bits of gear, accommodation and even research support in exchange for my photos.

* Also, it is OK if you disagree with my opinion. If you want to give your photos away for free, go ahead. I do not like it because it causes depreciation of other photographers’ work, but I cannot stop you. However, if one day you choose to start viewing your creations as valuable and decide to charge a fee for their use, making that transition from charging nothing will be hard for you, take it from someone who has been in that stage.

One thought on “You cannot afford to buy this image”