In my earlier post I mentioned that New Zealand is often referred to as the “land of birds”. I can understand the reasons behind this, but I cannot say I agree.
In the three months I have been traveling around New Zealand I got to explore many nature reserves as well as some disturbed habitats and I have to say that while birds seem to be very common and very diverse, they do not appear to be (at least in my opinion) the dominant animal. If I had to choose one living organism that thrives in almost any spot on these islands, it would be amphipods.

An amphipod climbing a leaf in search for food (Dunedin, South Island)

Amphipods are small crustaceans (usually less than 10mm) that occupy both aquatic and terrestrial habitats. I do not know much about aquatic amphipods, but when I studied amphibians in the past I have seen amphipods roaming the muddy banks of ponds and scavenging in urban gardens. As crustaceans, they breathe through gills and as a consequence they are restricted to very humid niches, such as leaf litter on the forest floor, or under stones. 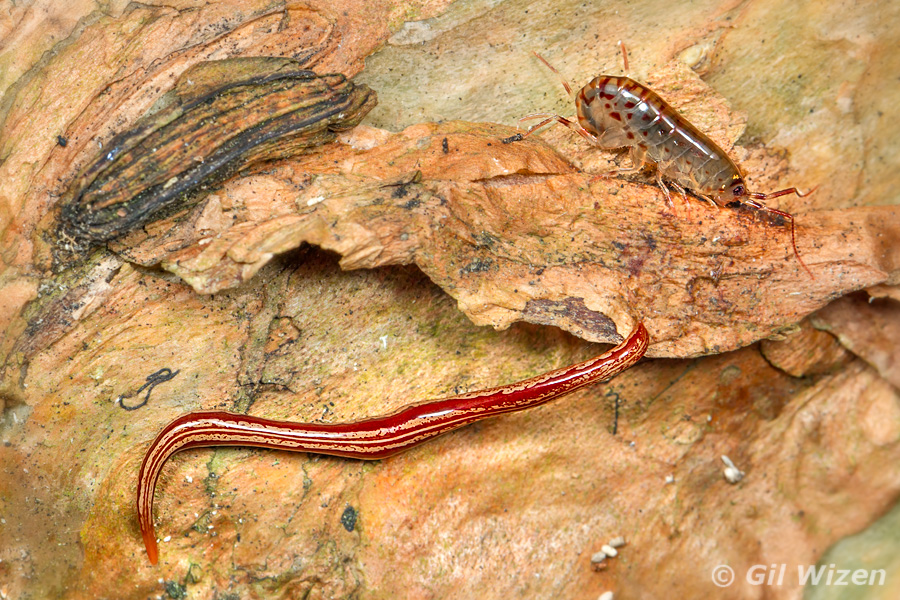 Amphipods share the habitat with many invertebrate predators, such as flatworms. If the two meet, even the fast-moving amphipod does not stand a chance against the tight grip of the worm (Otago Peninsula, South Island)

In New Zealand, it seems that amphipods have a significant role in the ecosystem, as either detritivores or herbivores. The high humidity and frequent rainfall in New Zealand allow them to exist in many types of habitat. They are abundant in extremely high numbers, and in addition to their effect on the vegetation and soil composition they serve as food for many predators. I remember several times when I was out on night surveys and heard a continuous crunching noise in the background. When I shone a light on the ground I saw hundreds of amphipods chewing on plants’ leaves. They were just everywhere. Some NZ species are “giants” among the terrestrial amphipods and their bodies reach the whopping length of 14mm!

One can definitely get an amphipod “fix” just by being exposed to so many species in one place in such a short time. After this trip, I will never look at NZ as a haven for birds. In my opinion, it should definitely be called “the land of amphipods”.

2 thoughts on “The land of amphipods”