You know, every once in a while I come across something original and unique that makes me fall in love with the art of adapting a reference to another medium. A great example for this is the world of fashion where designers draw their inspiration from just about anything you can (and cannot) imagine. Without doubt the natural world is used frequently as inspiration for flamboyant styles as well. However, occasionally I come across the reverse – attempts to pair current fashion trends or designs with unrelated existing subjects. Take the legendary Bowiebranchia for example, a webpage dedicated to matching outfits worn by the late David Bowie with their respective nudibranch and sea slug counterparts. Ever since this page went viral, I have seen many similar posts featuring other celebrities compared in their fashion style to different animals and plants, even everyday objects. And there are new webpages doing the same with random fashion designs matched with nearly identical examples from the natural world (like @fashion.biologique on Instagram). It goes well beyond clothes, by the way – my friends on twitter did something similar with spider-themed nail polish.

A couple of weeks ago I got a notification on my Instagram account that I was tagged in a photo. I thought that was a little strange, because I am barely active on social media these days, and I hardly ever go into Instagram. When I checked it out, I saw that the tag was from a person who used my photo of Euglossa hansoni orchid bee as a reference for their work. The bee photo is quite popular; it seems many people love the color combination on this species. However, this particular artwork was a bit different from the ones I am used to. It showcased makeup.

To be honest, I wasn’t sure if I liked the result, so to get a better idea I navigated to the account’s homepage and oh boy I am sure glad I did. Before me were dozens of striking makeup interpretations of arthropods and other invertebrates. All of them looked highly professional. Each and every one unique in its own way. Eye candy (pun intended). 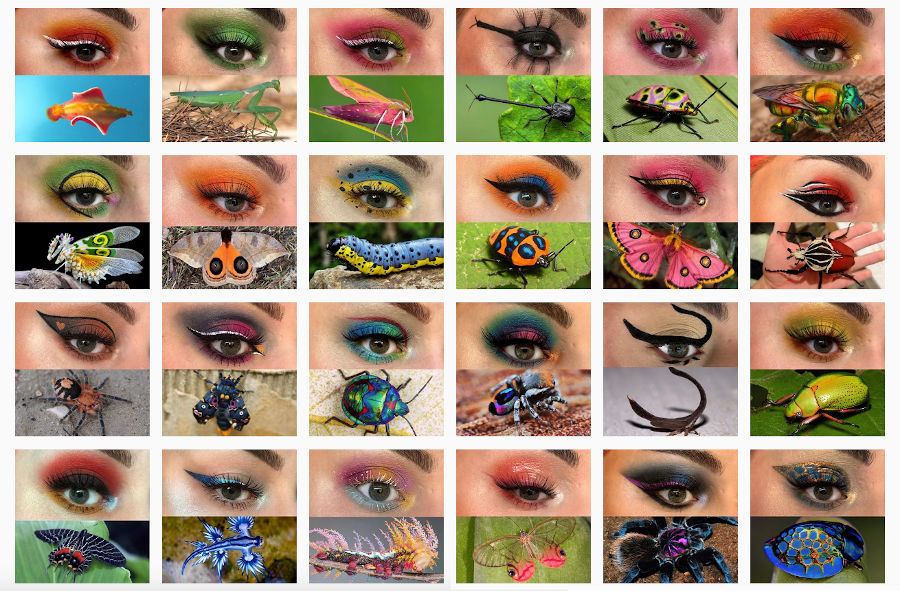 entomakeup Instagram page. This is just a tiny snapshot, go to the original page to see many more makeup looks.

The artist is Duran Jay, aka entomakeup, a UK-based arthropod enthusiast with an amazing talent for translating different color palettes and textures into eye makeup looks. I know close to nothing about makeup, so I was delighted when she agreed to tell me a little about her project and work process. All artwork shown here is courtesy of Duran Jay and posted with her permission.

How did this idea of creating arthropod-inspired eye makeup start?
Duran: “…It actually started with nudibranchs! I’m that one pal everyone has who always takes the joke a little bit too far, so when me and my friend daydreamed about setting up our own makeup line inspired by the bright colours and patterns of nudibranchs during a revision session a couple years ago I suppose it was only a matter of time. The COVID-19 lockdown afforded me the time and lack of anything else to do in order for that conversation to pop back into my head while I was sat in front of the mirror one day, and the unrelenting desire I have to push my love for entomology onto the people in my life meant that it naturally progressed to encompass my favourite bugs as well.”

Titan grasshopper (Titanacris picticrus) inspired look by Duran Jay. A faithful representation of the species, and the soft colors really compliment her eye.

“I posted my first entomakeup look in mid-May 2020 and committed to posting daily looks for the first few weeks so although it’s still a fairly new project, it has been quite intense. I’ve experimented with makeup for around 10 or so years now with varying levels of success, but certainly not on any kind of professional level. I don’t have a huge collection of makeup, I don’t use high end products and I won’t buy anything that isn’t cruelty-free. In fact, I only really use the same two eyeshadow palettes for all of the looks I post so it forces me to really get creative sometimes. Like most hobbies, practice and a good lineup of YouTube tutorials can go a long way!”

Goliath beetle (Goliathus goliathus) inspired look by Duran Jay. I feel like there should be a “Kapow!” on the next page in the entomakeup manga

As a side note, some of Duran’s creations may look like they were taken straight out of a comic book or a manga (and I mean this in the most flattering way possible). Her Goliath beetle look, seen above, is simply stunning in my opinion. It is punchy, full of character, and I admit that I’d love to see how it looks on both eyes. I’ll also add that I’m a bit of sucker for Fuchs’ crypts in eyes… and Duran’s are so beautiful.

How do you choose which arthropod species to use as the model?
Duran: “I have a pretty big list of species names and photographs on my phone that I‘ll add to when I’m fortunate to stumble across a particularly striking species. I also get quite a few messages from friends and followers requesting me to recreate their favourite species, which is always quite interesting for me because they might suggest something I’d never really considered before (like the silverfish look I posted in June). I try to make sure that I mix the colour palettes up and don’t post looks from the same order or class across consecutive days, which can be a bit of a challenge sometimes (especially when there’s a species I’m really eager to try) but I’m lucky in the sense there are millions of arthropod species out there to choose from so I suppose I’m never short on options!” 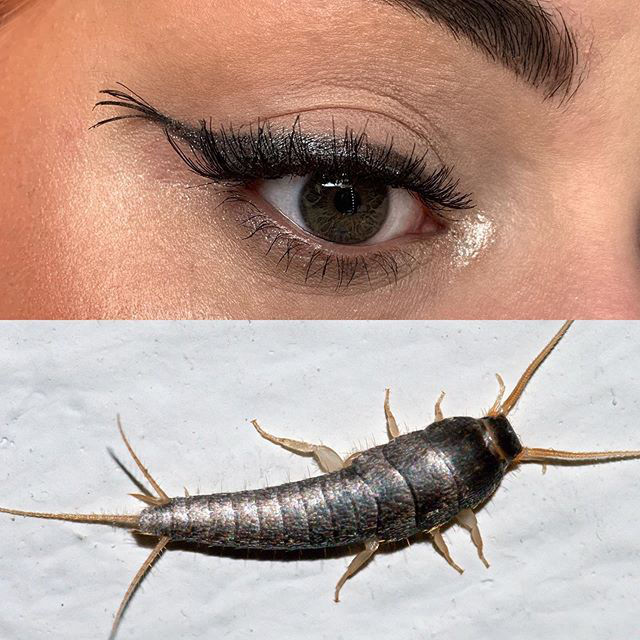 The aforementioned silverfish look is one of my favorites. It is so simple and yet contains enough detail to hint about the animal with the added “tail”. In my opinion, this look is also very close to traditional makeup, so much that it can become mainstream. Make it happen, people.

How long does it take to complete each work, from conception to a finished makeup artwork?
Duran: “It can take anywhere between 10 minutes to an hour. I’ve had a few instances where it didn’t quite work out the way it looked in my mind beforehand, so I’ve had to revisit my options and figure out what I can do differently to achieve what I want to do. I suppose that’s part of the fun for me.”

10 minutes to an hour??? That is impressive. To me some of these creations look like they can take several hours to pull off right. The more minimalist entomakeup looks are not too shabby either; the one seen above could easily be considered as everyday makeup, if not for the fact that Duran’s eye represents the actual eyespot on a butterfly’s hindwings! I have never seen anyone use a lepidopteran reference for makeup in this manner. A few other examples for this concept can be seen here and here.

Have you ever taken any of the entomakeup creations outside, and what was people’s reaction when they saw it?
Duran: “Occasionally! I distinctly remember getting some strange looks when I wore my somewhat dramatic Bolivian dwarf beauty tarantula (Cyriocosmus perezmilesi) look to pop out for a pint of milk, but generally people are really nice. I have brightly-coloured hair and dress in obnoxiously colourful clothes a lot of the time anyway, so people probably assume the outlandish makeup is just part of my everyday look. I do sometimes wonder if I’d have as many ‘likes’ on my Facebook profile picture if my friends knew I was wearing makeup inspired by a parasitic cuckoo wasp in it, however.” 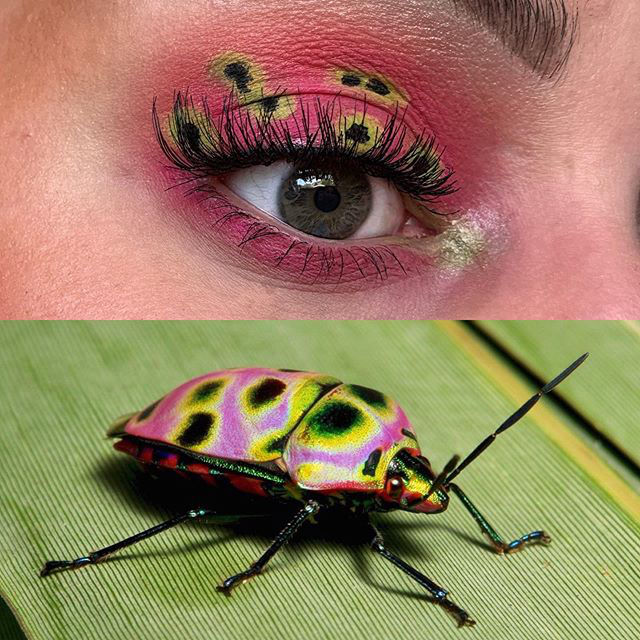 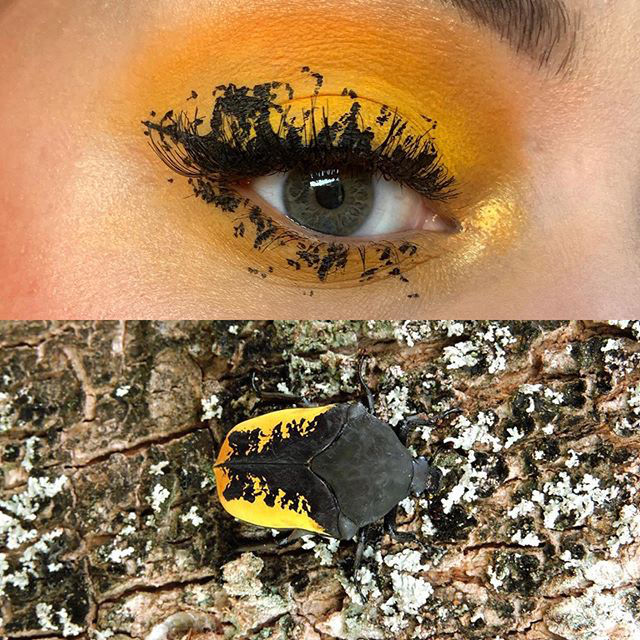 Duran is also very good at adapting natural color patterns and textures into her makeup looks. In the case of the shield bug Poecilocoris rufigenis, the spot pattern is unappetizing for birds, but she managed to make it look natural on the eyelid and quite attractive. And in the case of the Gymnetis flower beetle, this has got to be one of the best interpretations I’ve seen for the velvety black color transitioning into yellow on the beetle’s elytra. It is another one of those comic book looks that I’d love to see on both eyes together. Another great example of good interpretation of pattern and texture is this South American caterpillar look.

How many makeup looks do you plan to make?
Duran: “This is difficult to answer, because I never really had a ‘plan’ to begin with. I started the Instagram page really just as a way of documenting a fun little quarantine project whilst relieving my friends who didn’t constantly want to see bugs and makeup popping up on my personal profile. I certainly never dreamt I’d receive so many messages from strangers across the world saying they love what I do! I think if it ever started feeling like a chore or an obligatory task, I’d stop. I don’t ever really want to lose the fun of it.”

Orchid mantis (Hymenopus coronatus) inspired look by Duran Jay. Who says eyelashes have to be dark? entomakeup will change the way you think about eye makeup.

I mentioned that the artist is also an arthropod enthusiast, and she keeps pet mantids. When creating an eye makeup look based on the orchid mantis Hymenopus coronatus, she was not afraid to go beyond what is necessary to complete an accurate representation of the mantis, along with the actual insect itself. That is bold.

Duran’s entomakeup work screams professionalism to me, yet she is very humble about her success and sees it more like a hobby. I asked her if she has any future plans for this project, either publishing or using it for landing commercial work.
“The idea of a book or even an exhibition seems utterly insane to me… My original dream was to create a makeup line, so if I could create an arthropod-inspired eyeshadow palette one day I would be absolutely ecstatic!”

Being an arthropod lover myself, I hope this wish comes true one day. In the meantime, I’ll continue to enjoy her daily posts. You can catch up with Duran’s brilliant work on her Instagram page.