Whenever I visit Latin America I make sure to leave some time for observing orchid bees in activity. This means my morning routine is usually very brief: a quick breakfast, some reorganization of gear from the previous night hike, and heading out. The bees are usually active between 7:30-11am, so it is a race against the clock to locate them in the rainforest.

A month ago I posted a photo on my social media accounts showing a group of Euglossa bees collecting fungus threads from tree bark in Costa Rica. Since then, this photo has become very popular and has been shared and retweeted thousands of times (unfortunately, a big chunk of these shares is by people who uploaded the photo to their pages without my permission). This is currently my most shared photo to date. Even as of writing this post, one month after posting the photo, it still generates new likes, shares, and comments. In fact, the title of this post, “Teenage Mutant Ninja Orchid Bees”, is taken directly from the comments, as some people noted the photo reminded them of Teenage Mutant Ninja Turtles. 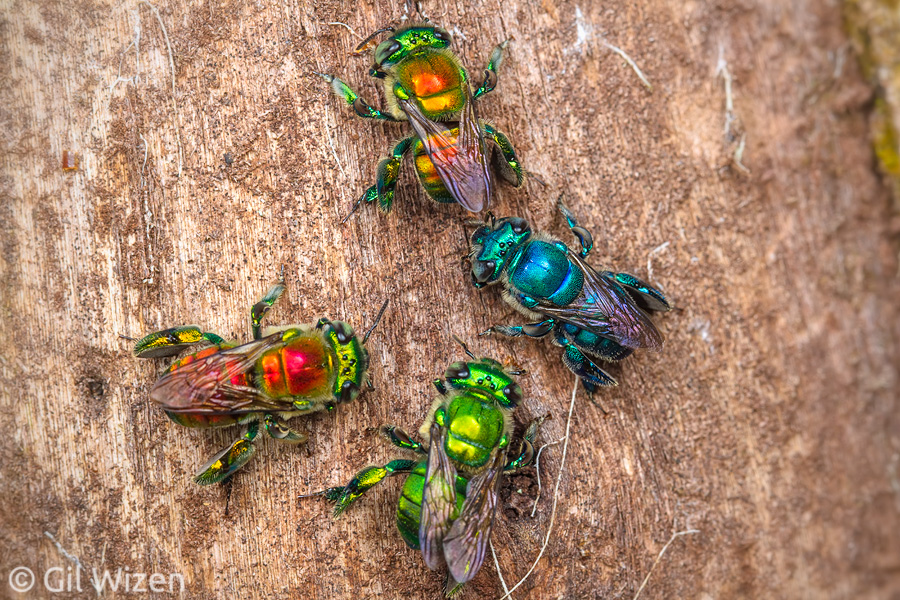 While I will argue that in order to truly appreciate the beauty of orchid bees one must observe them from a close distance, this photo does represent well their diversity (showing three distinct Euglossa species) and variation (the “red” and “orange” bees belong to the same species). Soon after the photo spread through the internet I was flooded with questions about orchid bees, so I thought it would make a nice opportunity to write a post about them and address some of the inquiries.

That orange bee (Euglossa hansoni) from the group photo above? This is what it looks like when viewed from up close. Words cannot describe this beauty.

Are you sure these are not flies? Despite bearing a strong resemblance to bottle flies, these insects are indeed bees: orchid bees are members of tribe Euglossini which contains five genera: Euglossa, Eulaema, Eufriesea, Exaerete and Aglae. They are somewhat closely related to the eusocial honey bees and bumblebees, however most orchid bees lead a solitary lifestyle. The genera Exaerete and Aglae are cleptoparasites, developing in the nests of other orchid bees. There are about 200 species of orchid bees, distributed only in the Americas, mostly in Central and South America. Only one species occurs in the United States. Like many other bees, orchid bees collect nectar, pollen and resin from plants. They can be distinguished from other bees by their shiny metallic coloration and their extremely long tongues, which can be twice the length of the body. Most of the time the tongue is folded underneath the body and extends behind the abdomen. 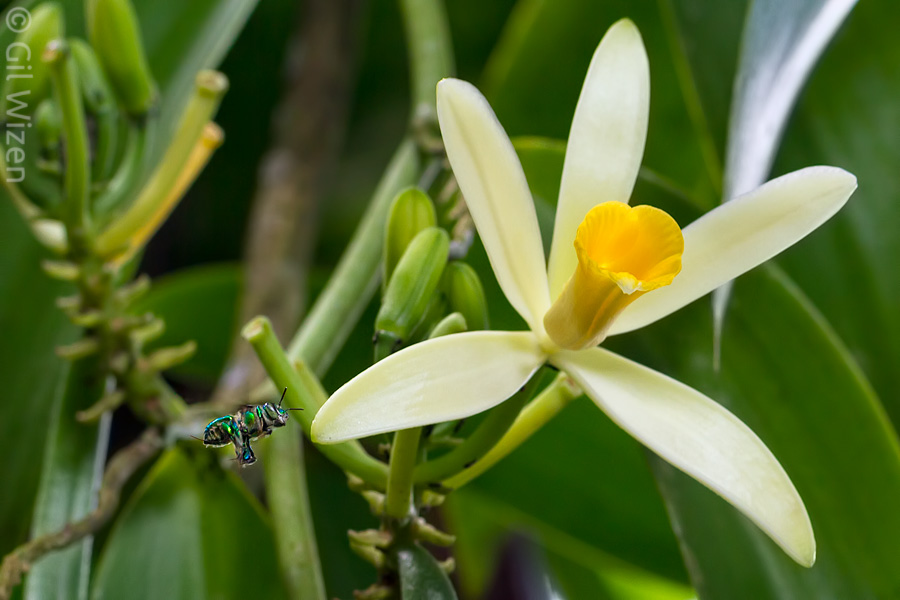 Orchid bees can be easily found near fragrant orchids. This male was spotted hovering near a vanilla flower. Photographed in Caves Branch, Cayo District, Belize

Are they dangerous? Can they sting? Orchid bees are far less dangerous than honey bees. Being solitary (excluding a few species that are communal), orchid bees have no colony or a queen to defend. That being said, female orchid bees do possess a stinger, which they will not hesitate to use when threatened. Interestingly, the females are very rarely encountered. I have encountered them only near stream banks, collecting clay mud for construction of their nest. Most of the bees observed in the rainforest are males. Although their folded tongue sticking behind the abdomen may look like a stinger, males have no stinger and pose no danger to anyone.

Male orchid bee (Euglossa sp.) in mid-flight, showing its long tonguefolded underneath the body. This is not a stinger! Photographed in the Amazon Basin, Ecuador

Why are they called orchid bees? Male orchid bees exhibit an interesting and unique behavior – fragrance collection. They collect and store different volatile compounds, some of which are found in orchid flowers. To get the right mixture of chemicals, they sometimes travel long distances in flight. Being able to detect the tiniest amount of a desired compound in the air, the bees home-in on the scent column and navigate to it with impressive accuracy. Once landed at the site, the males scrape the odorous compounds using modified brushes on their forelegs, and then while in mid-air transfer and press them into special storage chambers in their hind legs. The process is repeated until the bee has collected enough of the chemical. The purpose of collecting the fragrant compounds is not entirely clear, but it is strongly believed that they play an important role in mate choice by the females, just as perfume is used to attract a mate in humans.

Male orchid bee (Euglossa intersecta) collecting fragrant compounds from tree bark. Note the long hairs on the forelegs that assist in scraping the chemicals. Photographed in the Amazon Basin, Ecuador

To collect a variety of scents, the bees visit primarily orchids flowers, but also other flowers, tree wounds, fungi and even corpses. One species was even recorded collecting the insecticide DDT without suffering any damage from the chemical.
The fragrance collection behavior allows the attraction of males using different baits containing essential oils, and can be useful for biologists to learn about their seasonal abundance and diversity. 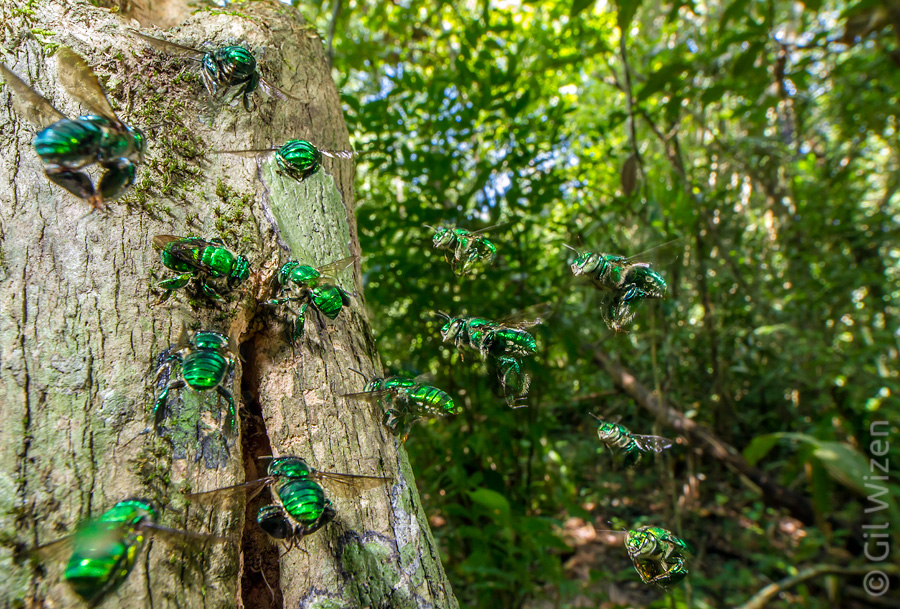 A carefully selected site for bating orchid bees can attract a few dozens of males, as seen here. Photographed in Cayo District, Belize

Some fragrant orchids have evolved different adaptations to take advantage of this perfume-seeking behavior, which involve the male bees pushing or crawling into the flowers, triggering a mechanism that glues a pair of pollen packets (called pollinia or pollinaria, depending on the type of plant tissue involved) on the bee’s head or thorax. These pollen packets will travel with the male bee to the next flower to complete the pollination process.

Why are orchid bees so colorful? This question is a hard one to answer. The metallic color does not seem to have a clear function. However, it is important to note that not all orchid bees are colorful. While members of genera Euglossa, Exaerete and Aglae are flashy with colors ranging from gold, red and green to blue and violet, members of Eulaema and Eufriesea are less showy and sport dark colors and a thick coat of hairs, which make them look like fuzzy bumblebees.

Orchid bees are fascinating insects that can be observed safely without the need for special equipment or prior preparation. I would like to share with you something I like to do when I find a group of male bees in activity: I approach slowly and place my head close to their gathering spot. The bees are so busy closing in on the scent cone that they are not bothered by my presence. Then I close my eyes. The loud buzzing sounds piercing through the air make me feel like I am standing right in the middle of an insectopian highway. It is quite a unique sensation. Try it. You won’t regret.