Earlier this summer I spent a couple of weeks in Israel. I like these home visits – regardless of the joy of seeing my family and friends and catching up, there is something rewarding about coming to Israel as a tourist. Sure, it will always be my home country, but since things around are constantly changing, I feel that in many aspects Israel is a home far from being a home. And I love it. It is all mine to re-explore every single time!

In one of my free evenings I planned a herping trip to the dunes in the Western Negev region. I was hoping to find one of the country’s most elusive venomous snakes: the horned desert viper (Cerastes cerastes). But what I found was way better.

I arrived to the site two hours before sunset. It was disturbingly quiet, as if the desert was teasing you to reveal all the treasures hidden within it. I did what I always do before a night survey – I went for a walk. There were many footprints decorating the sand, a sign for busy activity of lizards, ants and darkling beetles. The few green plants around were crawling with insects, juvenile locusts to be more exact (this is a topic of a future post). At the top of one of the sand dunes I found a baby desert tortoise (Testudo werneri). This reptile is considered critically endangered according to the IUCN Red List of Threatened Species, so you can imagine how happy I was to find evidence for successful breeding of this species!

When I reached down to check an Artemisia monosperma, I noticed movements in the sand at the base of the bush. With a small spade I managed to “fish” out the reptile, it was a cute Wedge-snouted Skink (Sphenops sepsoides). This elongated skink almost never shows up on the sand surface. It has very short legs, and prefers to “swim” inside the sand in snake-like movements, like a terrestrial eel. 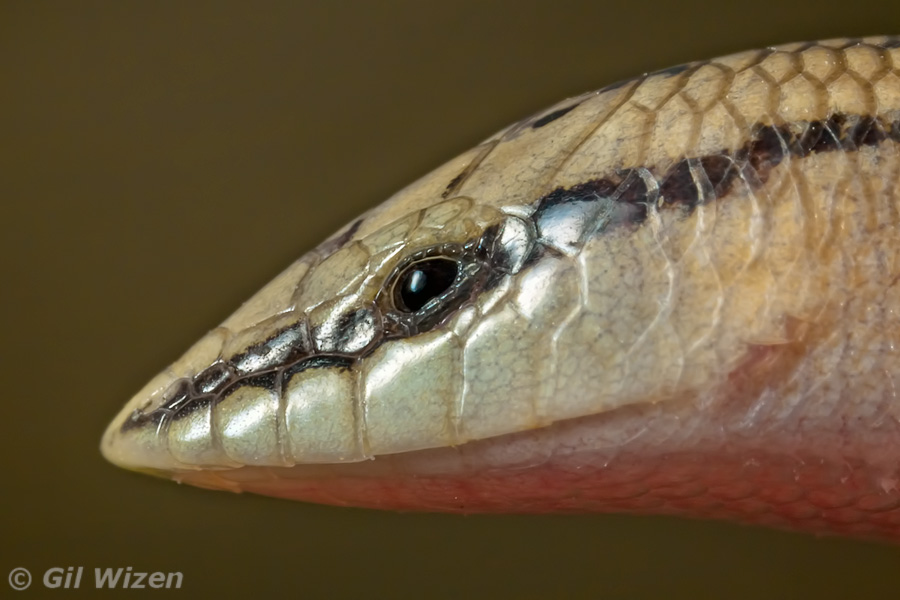 Sunset over the Western Negev desert. Soon the fun begins!

The sun started disappearing behind one of the dunes. I armed myself with LED flashlights and tweezers and set out looking for trouble.
And trouble found me alright. At the loess grounds leading to the dunes I stumbled upon a painted saw-scaled viper (Echis coloratus). This is a venomous snake I do not like to meet up close, because of its typical aggressive behavior. It was hiding in a deserted rodent burrow, and did not pose a serious threat though. A few hundred meters away I found a second snake of the same species, juvenile. I always feel like I am safer with smaller snakes even if they are venomous, but this is just an illusion. The juvenile snakes are as unpredictable and dangerous as the adults ones, and I would not want to find myself in a situation where I am getting bitten. Fortunately for me, this snake was just not in activity yet, so it was slow and sluggish. I could carefully examine it from a close distance.

Short-fingered geckos (Stenodactylus sthenodactylus and Stenodactylus petrii) were out and about in search for small prey insects. Their color blends so well with the sand that I had to be carful not to step on them while walking. These are some of my favorite geckos, with their wide heads and big colorful eyes they look like animated plush toys.

It was getting late and even though I saw many interesting reptiles and arthropods, I failed to find the snake I was looking for. I decided to walk even further, to another area with tall dunes. It was not there, too. I reached down to photograph a fat-tailed scorpion (Androctonus bicolor) when I suddenly heard the alarming sound of heavy breathing behind me.

Fat-tailed scorpion (Androctonus bicolor) – one of my favorite scorpion species in Israel. Now while watching this, imagine someone breathing heavily behind you.

I quickly snapped a single photo and stood up. The breathing sound became louder. This is not the best scenario one would like to find himself in – alone, in the dark, in the middle of the desert and far from any human settlement. That breathing sounded so heavy, that I blindly assumed I was being watched by a large mammal. My guess was that there is a striped hyena standing behind me. Another one of those animals I do not want to meet up close and personal.

I turned around, but there was nothing there. Suddenly I heard the breathing again, from a few meters away. I aimed my flashlight, and saw this guy:

The desert monitor (Varanus griseus) is a lizard one really does not see very often in Israel. I consider myself extremely lucky, because I have seen it on several occasions (thanks to my military service which I spent in one of the country’s best locations for observing Varanus) but it is unbelievably impressive every single time. This individual was about a meter in length including its tail, and I presume it is not even an adult. The monitors feed on invertebrates and small vertebrates such as rodents and ground-dwelling birds. They spend most of their life in a large underground burrow, only coming out to feed and reproduce. In fact, the reason this individual was so upset (hence the defensive breathing/hissing) was that I was standing right above its burrow entrance. Once I moved away following the lizard, it took advantage of the situation and quickly rushed inside.

The desert monitor was my prize for the night. I had already forgotten what else I was looking for. On my way back to the car, while feeling exhausted and ready to call it a night, I suddenly saw it. Hiding between two small Artemisia bushes, trying to blend in.
The horned desert viper (Cerastes cerastes).

It was a small male, but it was beautiful nevertheless. Tiny azure scales decorated his back, and two devilish horns extended above his cat-like eyes. It flattened its body and started rubbing its scales together, producing a loud Velcro sound. G-o-r-g-e-o-u-s snake. This is Israel’s most beautiful snake in my opinion, and can easily make a fine candidate for one of the most beautiful snakes in the world. I will definitely come back to find it again sometime in the future.

** I bet you are asking yourself – why does someone who present himself as an Entomologist spend so much time posting stories just about anything but insects?? Well, the truth is I have plenty of stories to tell about insects too, but I do not limit myself to six-legged creatures only. I like to appreciate all nature wonders, especially the small and cryptic organisms we tend to ignore/miss. I hope you would do the same.

In two days I will be joining BugShot, a macrophotography workshop in Belize led by some of the world’s finest macrophotographers. I hope to return not only with more photographs and stories but also with better skills, both as an Entomologist and a photographer.

2 thoughts on “An unexpected encounter”