Isn’t being outdoors the greatest thing in the world? Surrounded by the soothing beauty of nature, while observing species living together in harmony? It is easy to lose sense of reality sometimes. But things are not always what they seem, and this serenity is often deceiving. We do not like to think about it, but nature is a harsh environment. There is a constant struggle for survival, many animal and plant species compete with each other over resources and breeding space. In fact, many of the animals we humans encounter in the wild are already on their way out of the game, either due to senescence, diseases, pathogens or parasites. I always try to remind myself that if I stumble upon an elusive animal active beyond its normal activity time, and it is not startled by my presence, then something fishy is going on here.

That being said, I admit that many times my sound judgment is clouded by the sheer excitement of finding something I have never seen before. Case in point: During one of my visits to Mindo cloud forest in Ecuador, I came across a beautiful specimen of earwig.

In general, earwigs suffer from a bad reputation, or lack thereof. While many people simply ignore them because they do not find them interesting, others find them terrifying due to their menacing-looking pincers. Nevertheless, these animals are both fascinating and harmless. First, they have interesting behaviors. Pairs often construct a breeding chamber together, and females display maternal care, tending the eggs and baby earwigs until they can fend for themselves. 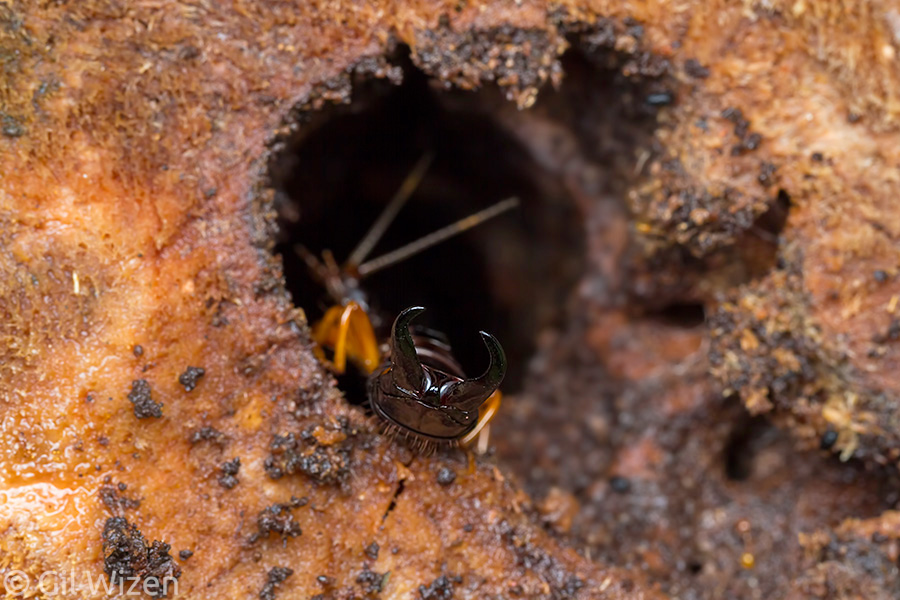 Giant earwig (Allostethus sp.) guarding the entrance to its burrow. Breeding pairs of earwigs construct such chambers, where the female later cares for the brood. Amazon Basin, Ecuador

Second, earwigs cannot cause any injury to us. They cannot bite, and they possess no stinger or venom. Some species have an unpleasant odor, but you should not go sniffing animals that sport a pair of pincers anyway… Earwigs are omnivorous, and although they mainly feed on plant matter, they often use their modified cerci (the pincers) to manipulate soft prey such as moths and insect larvae. Earwigs are usually seen crawling on the ground or on plants, clumsily dragging their elongated body. However, they are also good fliers – underneath those square leathery forewings are neatly folded flight wings. During flight they spread like a delicate fan.

The earwig I found in Mindo belonged to the genus Allostethus (family Labiduridae). It is a beautiful animal, with a length of up to 35mm, a shiny black body and orange legs, and each of its forewings is decorated with a bright orange patch. I found it active on a mossy tree trunk in broad daylight, something I should have regarded to as suspicious, as earwigs are nocturnal insects. In any case, I did not give it much thought and collected the specimen, hoping I could later get some behavioral shots of it preying. 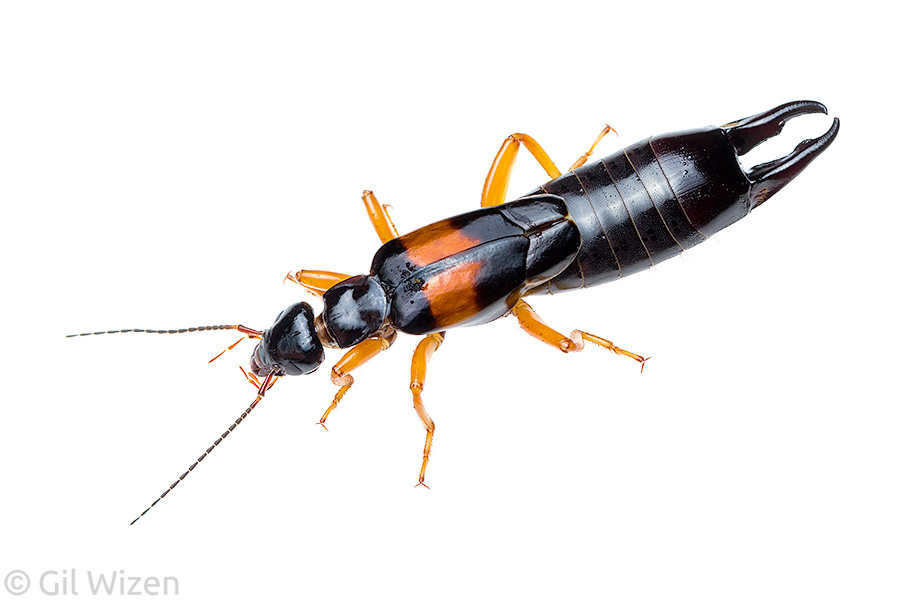 However, I waited too long. In the evening the animal stopped moving and appeared dead. I was devastated. It still looked healthy, no signs of injury, starvation, or poisoning. I decided to keep it in the vial and moved on to other work. The next morning I had my first evidence of the culprit – the earwig started to grow some whitish “fur”.

This was not, of course, fur per se, but small filaments indicating an infection by a parasitic fungus specifically feeding on insects. Parasitic entomophagic fungi (such as Cordyceps and Ophiocordyceps) are extremely common in the tropics. Moreover, they are so diverse that many of their species are host-specific. In other words, a certain fungus species attacks only arthropods from a specific order or family. Typically, the growing fungus inside the still-living arthropod alters its normal behavior, causing it to roam in unusual locations, and often outside of its normal range of activity hours. In many cases the infected animal climbs on nearby tree trunks, branches, or positions itself on the underside of a leaf. This is done to allow better spread of spores from the fungus fruit bodies.

Detail of the fungus feeding on the earwig

Seeing that stunning earwig giving in and dying was heartbreaking, but it is important to remember it happens every day in nature. When walking in a tropical forest, there are signs of death by entomophagic fungi all over the place. It is hard to avoid corpses of ants, grasshoppers, moths, and beetles, all with bright fungal horns and tubers sticking out of their bodies. However, it is extremely hard to predict if a living arthropod is already infected with the fungus or not. Many times I have seen insects that behaved like “zombies”, only to later find out that they were harboring a parasitoid wasp or a parasitic worm. Looking for early signs of a fungus infection is trickier, but at least now I am a little bit wiser. I will know what to do the next time I see an earwig climbing up a tree at daytime.